I had to take an impromptu trip to Houston, Texas, to give a demonstration for one of my clients based here in Cleveland. They asked me to go to the George Foreman Youth and Community Center to make a presentation and set up donated units that are specifically designed to help disabled individuals maintain proper fitness.

No problem, right? I've been dragged away a few times on spur-of-the-moment trips in the past, and I was pretty confident in my abilities to give a good talk and make friends with everyone.

Well, the first thing that happened was the weather. There was so much rain. 18 inches fell the Monday before my flight that Wednesday, and more rain was expected each day until Friday. There was a rather harrowing moment when my writing partner Paul called my hotel room later on and told me that he heard the dams in central Houston were at 80 percent capacity.

I thanked him so much for adding that to my worries list. I fancy myself a good swimmer, but I was in no hurry to test my aquatic abilities just yet.

On top of the rainfall, my connecting flight between Atlanta and Houston was a very sad occasion, at least for one person. In front of me sat a Marine Major escorting a fallen Marine home. As the ninety-minute flight turned into a three-and-a-half-hour marathon because of the new rain falling and thunderstorms, all I could do was think about the sacrifices some of us choose to make for others, and it made me really reflective. When I'd look out the window, especially after the third time we flew back from our re-routing over Corpus Christi, all I could see was brown muddy standing water, overflowing rivers and streams, parking lots with cars half submerged, and fields completely covered.

When we finally landed, there on the tarmac, drenched from the intermittent downpours, was an honor guard of Marines, policemen, firemen and EMS personnel. There was even a cannon. Everyone was waiting for the fallen fighter to come home for the last time. We sat silently in our seats as the Major left the plane first, and I was really touched, when despite the super-long flight, everyone joined me in a brief round of applause to show our appreciation for his and his fallen comrade's service.

It put everything into perspective.

Even with the comedy of errors that followed.

Before I left the airport, I bought a turkey cheddar sandwich from Starbucks and ate half. Remember that sandwich.

On Thursday, I awoke to find out that the boxes with the equipment for the George Foreman Youth Center weren't delivered yet. The torrential rains had caused a major back up and only one of the four boxes had arrived.

Instead of breezing in, demonstrating how the fitness system easily assembled, and making the presentation with the unit, I was going to have to wing it. Luckily, I knew the material, since I'd written quite a lot of it when we set up SIBF's charitable arm, the In Bed and Chair Recovery Foundation.

A flurry of communiques between Cleveland, Houston, and Fed-Ex finally located the missing boxes somewhere on a truck, with assurance that they'd be delivered between three and six that Thursday evening. Because of all the activity I missed lunch, so I ate another quarter of the sandwich, leaving just a tad for a snack later.

I arrived at the George Foreman Youth Center at 1:00 PM and stood outside in the rain waiting for Brandi, the center's manager, to arrive. I took some pictures and enjoyed the warm Texas rain - very different from Cleveland's cold downpours this time of year. I was still worried about staying out of everyone's way until the units arrived. 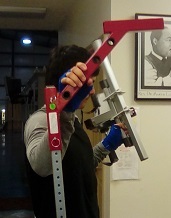 I didn't have to worry. I spent one of the nicest afternoons ever. George Foreman IV, Brandi, Miss Fay, and all the members of the center gave me warm welcomes and enthusiastic responses to the presentation and equipment once it arrived. It was a privilege to spend the day there, and made all the rain delays totally worth it! The 5:59 PM delivery of the unit gave me the opportunity to see the Youth Center in action for a few hours, and some very strong young men did me the courtesy of setting up the fitness equipment. All I had to do was explain how, and it was very easy. 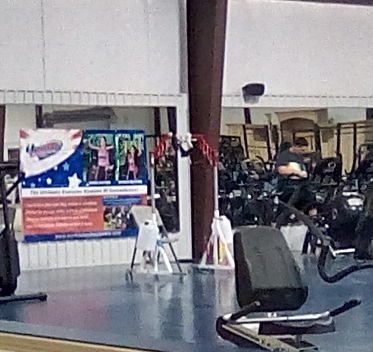 The George Foreman Youth Center began as a promise made between the heavyweight champion of the world, George Foreman, his brother Roy, and the youth of their community. They renovated a decrepit warehouse and transformed it into a world-class facility to help keep kids off the street, and to enable and enhance their self-esteem. Through boxing lessons, exercise equipment, books, and other programs, the facility now houses a boxing ring, where there are exhibitions, a separate basketball court, classes for sewing and other hobbies, and a warm, welcoming environment for all. 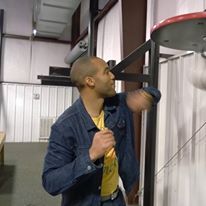 George Foreman IV and I discussed how the Youth Center can set up a demonstration area for the Stuck In Bed Fitness systems to provide individuals and groups a place to try out the unit for their own organizations or personal use. Since the units are specifically dedicated for use by people with disabilities, it was hoped the fitness system might bring an untapped population into the center and broaden its reach. Even so, the systems are also excellent for everyone, providing a total body workout without joint impact. So setting one up at the Center is inclusive and enabling.

I was extremely happy with how the day turned out.

If only the night had been just as memorable. Well, it was memorable alright, but for the wrong reasons.

I returned to the hotel feeling euphoric. I blithely retreated to my room, confident that after I finished my calls to the clients and my business partner, I'd be able to get a pizza delivered. It was well after eight by the time I talked to everyone, and I called to get food. Guess what? It was too late for delivery, probably because of the rain. Not a problem, there were vending machines and that quarter sandwich.

The front desk attendant looked at me as if I had grown three heads when I asked for change for the vending machine. She told me she didn't have any but insisted that I could get food delivered to me in about 45 minutes to an hour. I told her several times I was really hungry and about ready to pass out, and no one would deliver but to no avail. She just didn't seem to care. It was the first time since I'd arrived in Texas that I'd met someone exhibiting less than complete hospitality and helpfulness.

I mean, I'd intruded on the George Foreman Youth Center for an entire day, and the atmosphere was as friendly and warm as if I were at my best friend's house. Here at the hotel, a place that was supposed to welcome their guests, I seemed to be requesting the impossible.

I retreated to my room, cranky and hungry. I devoured the last quarter of the now-very-stale turkey-cheddar sandwich. Ironically, the room had a microwave and empty refrigerator -- I just had nothing to put in them. Then I did the unthinkable.

I called my writing partner in Cleveland and whined like a five-year-old.

This actually proved quite effective. After he called the desk and irately asked for a supervisor, and why the hotel was allowing a woman to starve to death in her own hotel room, miraculously some loose change appeared, and I was able to supplement the quarter-sandwich with some peanut butter crackers.

On Friday, the sun finally came out and the rains stopped just as I was heading for the airport. As I write this, Houston seems to be drying out and I hope that the next time I visit, I'll get to see more of the city, and of course find a hotel with a full service restaurant, working vending machines, or at least a change machine.

But on the plane flying home, I thought again about the fallen warrior who'd given his life for his country. And that made me think of all the wounded warriors here at home that every day struggle with disabilities and fitness challenges.

At least I was coming home.

It's all how you look at things, right?