Some Houston pastors are being forced to hand their sermons over to the city -- and they're not happy about the government reading over their shoulders.

Houston has asked five local conservative pastors to turn over sermons about a controversial new city ordinance that bans discrimination against LGBT people. The original subpoenas demanded to see any preaching related to homosexuality and gender identity.

Houston's mayor, Annise Parker, has agreed that the initial demands were too broad.

“Neither the mayor nor City Attorney David Feldman were aware the subpoenas had been issued until yesterday,” the mayor’s spokesperson Janice Evans told the Huffington Post over email. “Both agree the original documents were overly broad. The city will move to narrow the scope during an upcoming court hearing.”

This means the city will still seek to collect any communication issued by these pastors that mention the petition against the hotly contested Houston Equal Rights Ordinance (HERO).

The Alliance Defending Freedom, an advocacy group, said the move to scale back the subpoenas is just an attempt to "turn down the heat." The ADF has filed a motion to shut down the subpoena request completely.

Greg Scott, VP of communications for ADF, told HuffPost that the city's "intrusive demands are the same."

It appears that the city will still be demanding access to no less than 17 categories of private communications (including things like text messages) between private citizens who are not even parties to the suit and other private parties. This is a naked attempt to intimidate private citizens who did nothing but disagree with the government over a policy matter. Do any of us really want to live in an America in which we can be threatened, silenced, and even punished for disagreeing with the government?

Mayor Annise Parker, a lesbian who has been open about her sexuality, helped to push through this law in May. The ordinance bans discrimination against LGBT people in housing, in employment, and in public spaces.

A controversial part of HERO would allow transgender people to file a complaint if they are prevented from accessing the bathroom of their choice.

The law has yet to be implemented, RNS reports, as local and national faith leaders rally together to get it repealed. Opponents claim they collected about 50,000 signatures in support of placing this issue on November’s ballot, according to the Houston Chronicle. But the city discredited the effort, saying that the signatures weren’t valid.

If the 5 pastors used pulpits for politics, their sermons are fair game. Were instructions given on filling out anti-HERO petition?-A

Christian activists sued the city. The city's pro bono lawyers decided to fight back with the sermon subpoenas. Although the faith leaders are involved in the Houston Pastor’s Council, they aren’t named in the trial over the failed petition.

Still, the city believes they played an important part in the case.

“These pastors worked to organize the repeal petition,” Evans said.

City attorney David Feldman suggested that the city is entitled to collect evidence about the pastors’ speeches--even though they took place in houses of worship.

"Its relevant to know what representations and instructions were given regarding these petitions," Feldman told KTRH News. 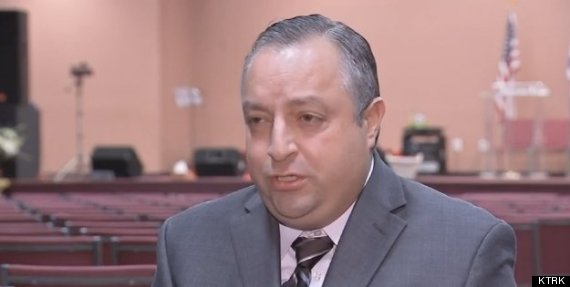 But Pastor Hernan Castano, one of the pastors on the city's list, believes the city has overstepped its boundaries.

"For a city government to step into churches and ask pastors to turn in sermons, it's gone too far. This is not what America, the nation is about," the pastor of Iglesia Rios de Aceite told KTRK.

But it's not only conservatives who are opposed to the city's actions.

Rev. Dr. C. Welton Gaddy, President of the Interfaith Alliance, has often spoken out in support of LGBT rights. However, he said Houston's subpoenas would have a "dangerous, chilling effect."

"I will work as hard to defend the freedom of speech from the pulpit for those with whom I disagree, as I will to defend the rights of the LGBT community. As long as a sermon is not inciting violence, the government has no business getting involved in the content of ministers’ sermons," Gaddy said in a statement released to the Huffington Post.