At one of the panels at the inaugural Writefest conference (moderated by historical fiction author Karleen Koen, and including the director of Writespace, Elizabeth White-Olsen, Amir Safi, the organizer of the weekly Write About Now slam poetry event, Becka Oliver, director of the Writers' League of Texas, and myself), the topic was forms of literary community: which ones work and why, what pushes the founders of such communities to go through the hard work and sacrifice necessary to make them a success, and what function they serve in the literary landscape. Everyone agreed that literary communities function best as support systems in which writers can develop their voice and craft and find necessary fellowship and inspiration in what is otherwise the most solitary of ventures.

Precisely such a community--a new one!--formed before our eyes all of last week in Houston. There has never been, to my knowledge, a major literary conference in Houston, which seems a shocking omission for a city this size and with its growing population of writers pursuing their craft in every genre imaginable. At last, then, here was a literary confabulation on a large scale, bringing to town editors of journals of a diverse array of genres and styles, workshops, critiques, and panel discussions on many aspects of the writer's craft, in an environment conducive to the unexpected serendipities and coincidences that make any conference like this worth attending. 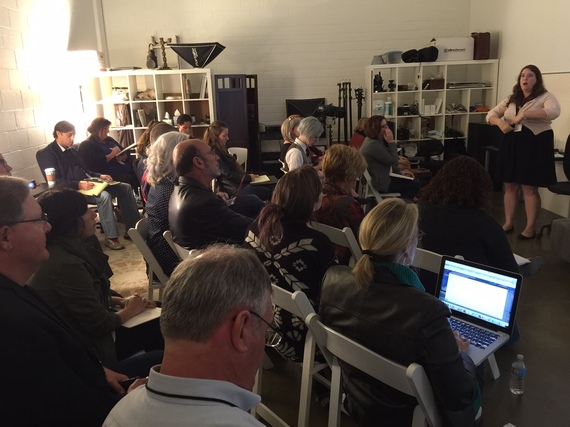 At the concluding panel on the last day, February 28, Layla al-Bedawi--the festival coordinator--reiterated that the idea behind forming Writespace was to serve different kinds of writing (not just literary fiction, but speculative fiction and other genres as well), be an instructional resource for different kinds of writers (not just writers following the "established" track), and to focus on the writing itself, an apparently obvious fact that all too often gets overlooked. Writespace--exemplified by the Writefest conference--offers emerging writers help to fulfill their ultimate goals as writers at various stages of their careers. 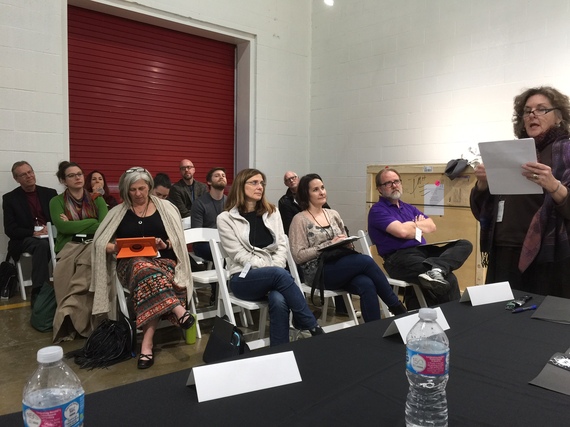 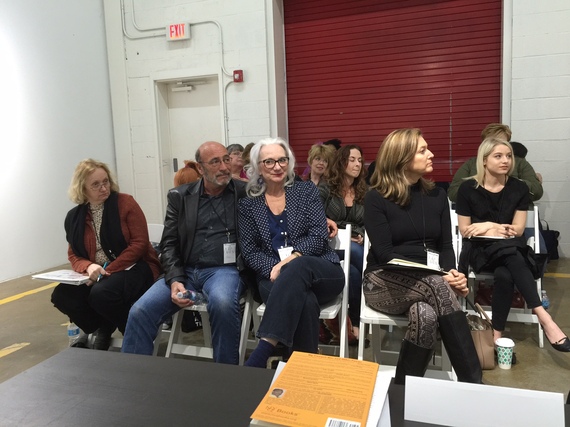 Another view of the audience at the literary communities panel

The Writefest conference--reflecting the organization's emphasis--turned out to be open, diverse, tolerant, warm, and inclusive, lending itself to spontaneous connections and friendships, with open dialogue between the editors and publishers who were present and writers at differing junctures of development. 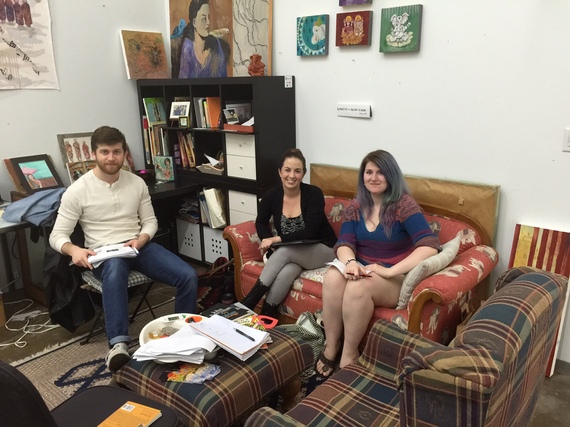 Members of the poetry workshop, including Morgan Cronin and Krissy Albertson 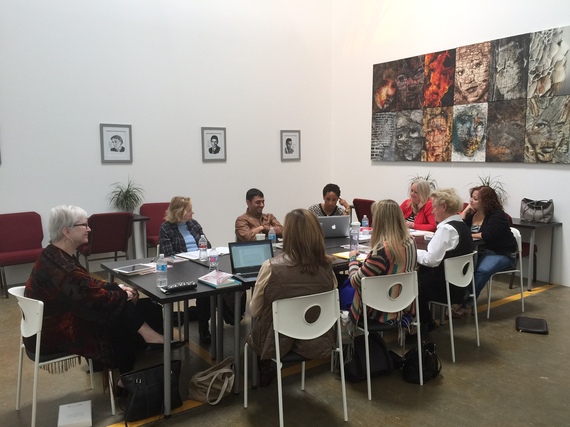 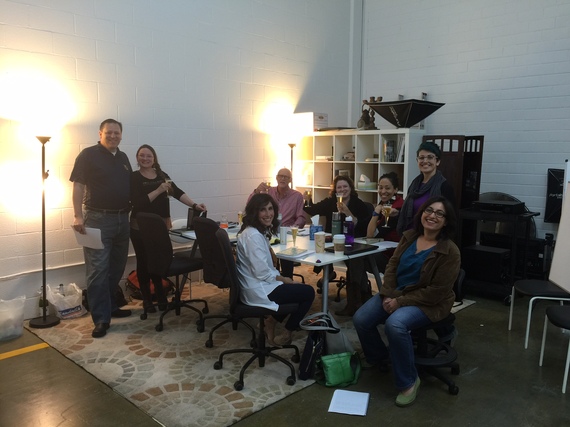 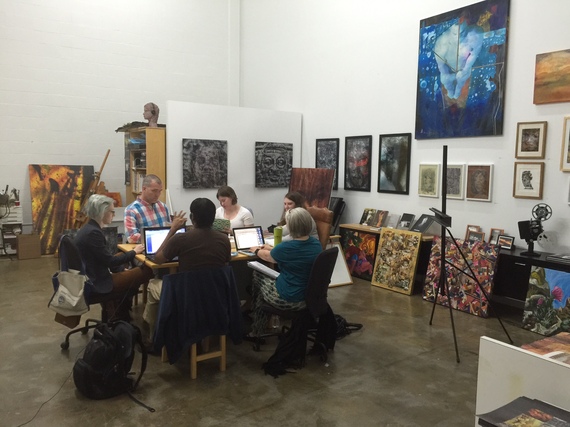 During the week there were intense workshops in different genres, and afternoon sessions along the same lines, while the weekend offered a packed schedule of panels and presentations by editors such as Jordan Bass of McSweeney's and Neil Clarke of Clarkesworld, and a range of engaged publishers such as Robert Stapleton of Booth magazine (published at Butler University in Indianapolis) and the organizers of Houston's annual Zinefest. 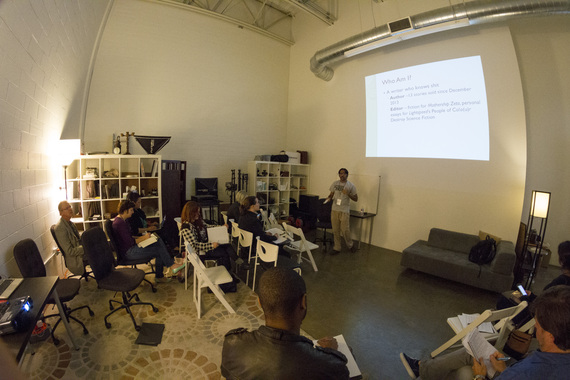 Amidst the lively panels and presentations on aspects of the writing life, from diversity in publication to the realities of running a journal or press, what I loved about Writefest was the absence of the overtly commercial emphasis that often mars the best-intentioned conferences. Yet the practical side of the writing life was more than adequately covered, as writers and editors shared the challenges and tribulations--and also the successes--of the literary venture at a time when writing is becoming free "content" and both more and less central to the mainstream cultural conversation.

Houston has a large and rapidly growing number of writers, sometimes immersed in their writing groups, often not, but there has so far not been one central place where they can come together to share their experiences whether they are beginners or farther along in their writing goals, to gain inspiration to continue their work over the long haul, and to make sense of this strange pursuit called writing in a time when the sanctity of the written word is under assault from the debasements of popular culture, political indoctrination, and academic doublespeak. 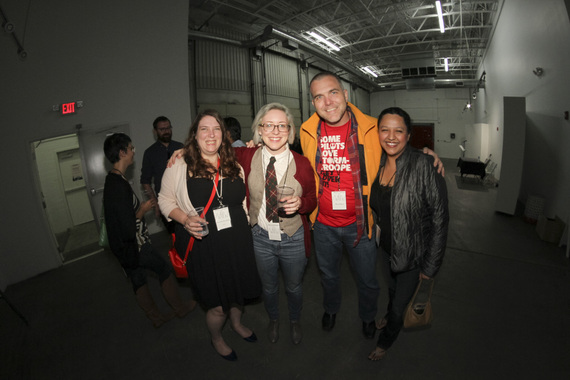 What I saw all week, minus the cynical practicality manifest at some other literary conferences, was emphasis on the quality of the written word: that, above all, as the saving grace for anyone who conceives of oneself as a writer, that most exalted of vocations. 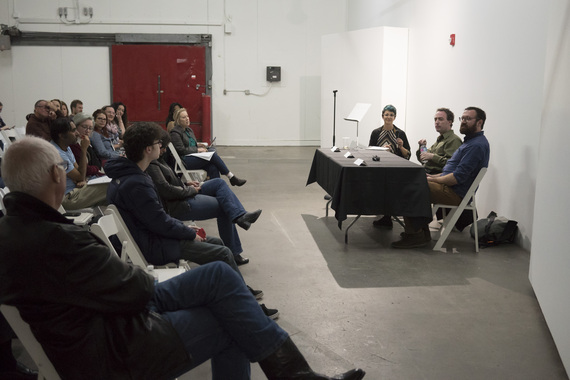 Writefest workshops and panels were held in beautiful artist studios--what an advantage, compared to the bland surroundings of huge writers' conferences held in anodyne hotels or convention centers!--and it was a pleasure to experience going back and forth between the literary journal fair and the panels and presentations at the Silver Street Studios (the building itself, at one time, used to be a brewery, just as the Silos at Sawyer Yards, next door, once used to be rice silos that have been converted and repurposed as artist studios). 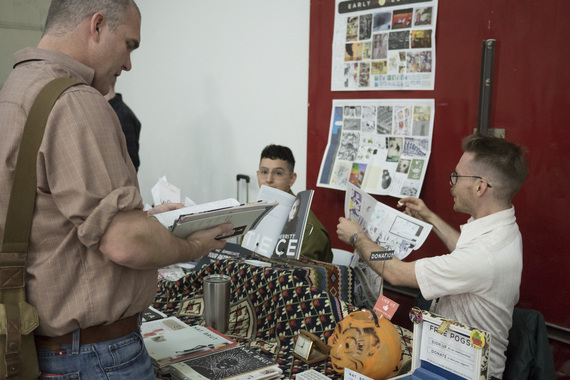 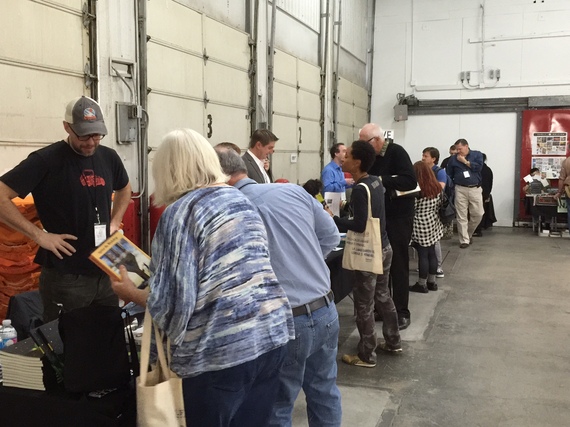 A section of the literary journal fair 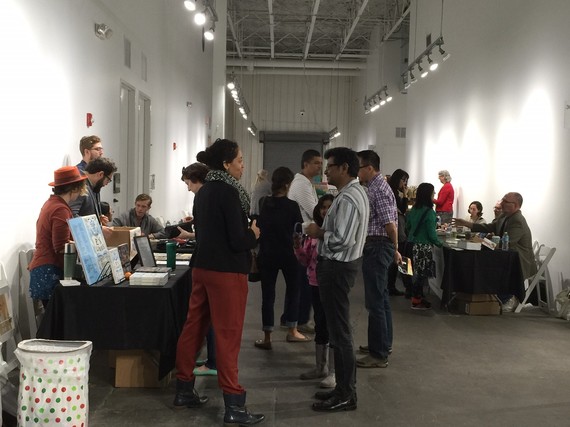 Another section of the literary journal fair, with Adrienne Perry in the foreground talking to photographer Rashed Haq, and at the front right table David-Glen Smith, poet and author with Saint Julian Press

Writefest delivered on its obligation to honor the written word--its sacral qualities and infinite power--in this weeklong celebration of those in Houston and surrounding communities who take this task very seriously indeed. It so happened that the Silver Street Studios parking lot was in use by the annual rodeo, happening this week. Rodeo campers were parked side by side with cars unloading writers in a giddy mood, happy that a conference like this had happened at last. And all within the penumbra of the Washington Avenue arts district, which includes not only the Silver Street Studios but also the adjoining Winter and Spring Street Studios, and the Silos at Sawyer Yards, which opened only recently. 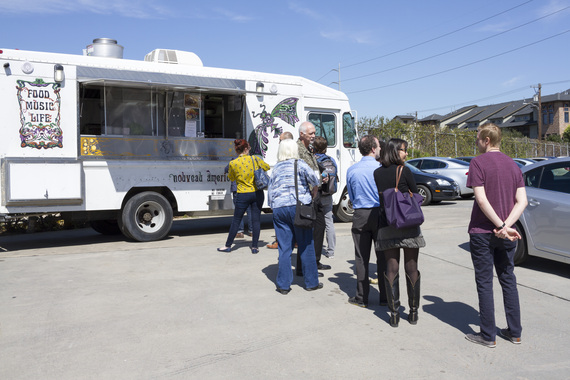 What would a Houston literary or arts event be without a food truck? (Photo courtesy Jairo Raza, Panaram Pictures)

A high point of the weeklong conference was the final reading at Trinity Episcopal Church, one of the most beautiful buildings in midtown Houston, across from the new MATCH (Midtown Arts and Theater Center Houston). Ron Starbuck, publisher of Saint Julian Press, hosted this event on behalf of Writefest, and we heard the lovely poetry of David-Glen Smith and Leslie Contreras Schwartz, both Saint Julian authors, as well as local impresarios Donna McKenzie and Doug Williams offering an enchanting reading from their play, Boundary, due to premiere March 25 at the MATCH.

For the future, there is every hope that Writefest will emerge as the single most important literary event of the year for Houston and indeed for the region. There is a certain democratic energy in the writing that is being created by many independent writers in this part of the country, and it only needs a showcase--and also a mutual learning platform--for this writing to mean more both to itself and to those who are not yet aware of it. This is just yet another important step in Houston becoming a center of literary creativity, merging with its equally burgeoning arts scene, just as San Francisco was in the 1950s or Los Angeles in the 1970s. All in all, this was a match made in heaven--or Houston!