"Houston is definitely the city to watch," says nationally recognized design critic Alexandra Lange. The car-centric, zoning-averse city (the fourth-largest in the nation) is undergoing a monumental transformation that is being led by landscape architecture--transformation at a scope and scale unseen in the U.S. in more than a century. The city is "desperately trying to shed its reputation as a concrete wasteland," the Houston Chronicle's Molly Glentzer has written, "and reinvent itself as a place of verdant, world-class parks." 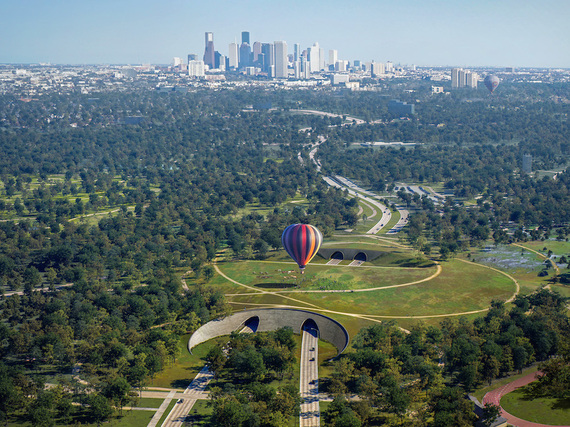 Hundreds of millions of dollars are being spent, as planners in Houston, like those in Toronto and other major metropolises, are engaging internationally significant practitioners who incorporate ecology, culture, and design excellence to yield exceptional projects built to the highest standards. All of this is made possible by a confluence of civic leadership (especially that of former Mayor Annise Parker), philanthropy, and public-private partnerships. One would have to look at the City Beautiful movement of a century ago, whose ambitions produced the McMillan Plan of 1902 in Washington, DC, for something comparable. 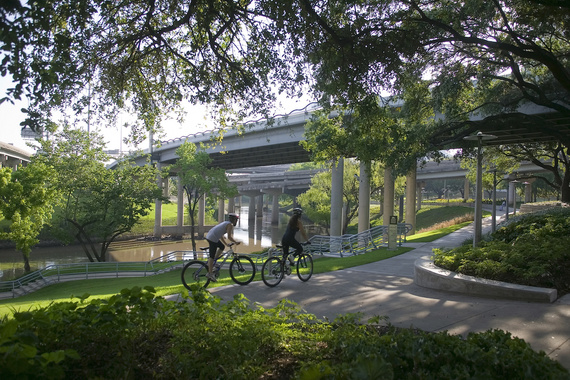 Sabine Promenade, by the SWA Group. Photo by Tom Fox.

The backstory on Houston's big embrace of landscape architecture was richly detailed by Mimi Swartz in the October 2015 issue of Texas Monthly. What has actually been built, what is planned, and how that could affect Houston and city-shaping more broadly is the subject of the March 11, 2016 conference Leading with Landscape II: The Houston Transformation.

Houston's highly urbanized landscape, encircled and traversed by ribbons of highways, is comprised of parks, university campuses, suburbs, and public open spaces. The Picturesque, Beaux-Arts, and Modernist styles can all be found amidst the city's dense residential, commercial, and industrial enclaves. Massachusetts-based landscape architect Arthur Comey developed the city's first comprehensive plan in 1913. Three years later, the Houston Parks and Recreation Department was created to provide oversight for two parcels--the 20-acre Sam Houston Park, founded in 1889, and the 285-acre Hermann Park, donated to the City in 1914. Comey's early planning efforts are generally viewed as an important first step, but they were interrupted by a change in political leadership, World War I, the Great Depression, World War II, and the primacy of oil.

It is only in recent years, Houston Chronicle Managing Editor Vernon Loeb says, that the city has become "mature enough" to think about "quality of life issues ... parks in Houston are more than an amenity ... [they're part of] a re-imagination of what the city could be." He cites the 2008 Hargreaves Associates-designed Discovery Green--"one of the coolest urban parks"--as transformative in helping make "downtown an actual downtown." 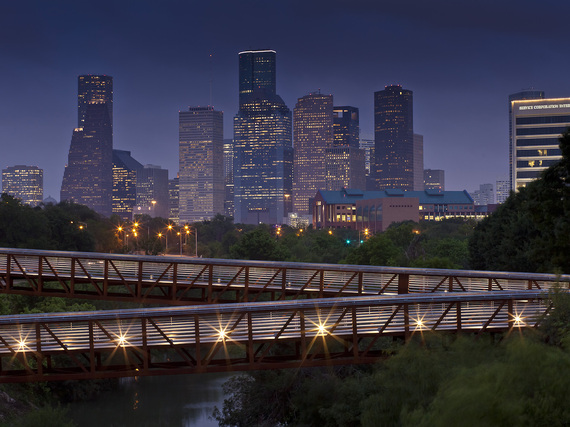 Rosemont Bridge and Trails, by the SWA Group. Photo by Jonnu Singleton.

It's upon this foundation that the present work is taking place. However, unlike the City Beautiful movement, which saw planning by a single individual or firm, we're witnessing the creation of a larger tapestry with more players working shoulder to shoulder to create an often contiguous, unified whole. The challenges, goals and measures of success are extremely complex: through the overarching lens of design, landscape architects are analyzing, choreographing, and developing innovative solutions that address environmental, ecological, social, cultural, and other issues. 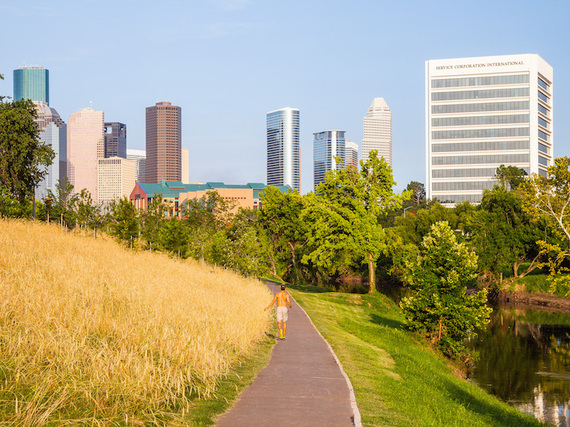 "We design for extremes," says Steven Spears, a principal and partner at the landscape architecture firm Design Workshop, describing the variable weather as a "pendulum of activity." "In 2008 we saw 12 inches of rain in one day; during the 2011 drought there was 14 inches in one year." And, the "extremes," according to Frederick Steiner, dean of UT-Austin's School of Architecture, "are getting more pronounced." Six years of drought influenced Nelson Byrd Woltz's redesign of Memorial Park. Speaking of its "nature and culture," landscape architect Thomas Woltz said, "the complexities of the park were invisible," specifically highlighting its "ecological issues and layers of cultural connectivity." 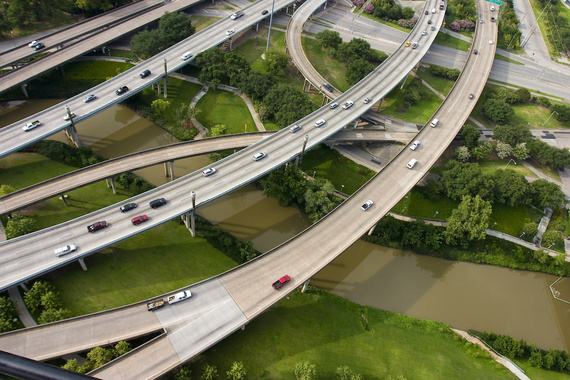 Sabine Promenade, by the SWA Group. Photo by William Tatham.

Flood-prone Buffalo Bayou Park, according to Scott McCready, a principal at the SWA Group, "was a well-loved, well-used park." SWA's role, he said in an understated way, was to "amplify what was already there" -it was also an infrastructure project designed and engineered for managing storm water.

But these practitioners recognize that flooded bayous and parched parks are just some of the issues. As Loeb notes, there's a growing call to make parks "accessible to everyone." Houston, he says, is the "most income-segregated city in America. But there is a lot of upward mobility and possibilities." He sees parks as part of "a social solution to income and racial segregation." In Defining the Just City Beyond Black and White, architect and city planner Toni I. Griffin outlined "ten values"--equity, choice, access, connectivity, ownership, diversity, participation, inclusion and belonging, beauty, and creative innovation--as "metrics for designing for the just city." I won't attempt to summarize each--I recommend reading the article--but I would argue that they apply to the design and management of parks and open spaces, too. 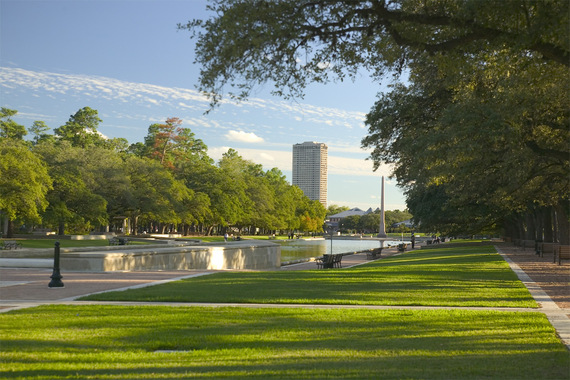 Along the Reflection Pool, Hermann Park, by OLIN and the SWA Group. Photo by Tom Fox.

Today, the Houston Parks and Recreation Department, which is celebrating its centennial, manages a network of hundreds of parks and open spaces comprising more than 23,000 acres. Sites like the Houston Arboretum and Nature Center, by Design Workshop and Reed Hilderbrand, are joining great legacy spaces like the 445-acre Hermann Park (designed in 1916 by George Kessler), whose notorious mud hole became the beloved Reflection Pond through the collective efforts of OLIN and the SWA Group. The elegant Menil Collection Campus is currently the subject of a master plan by Michael Van Valkenburgh Associates, and West 8 has just gotten approval to devise the Houston Botanical Garden's master plan. 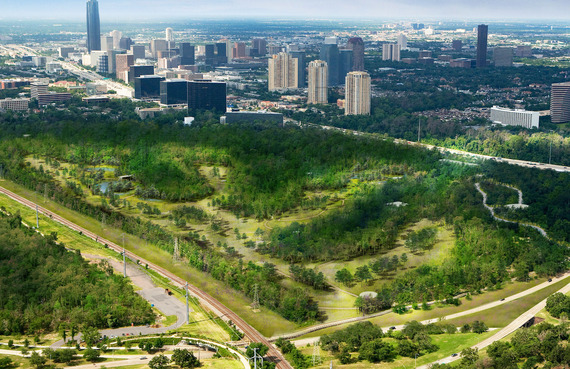 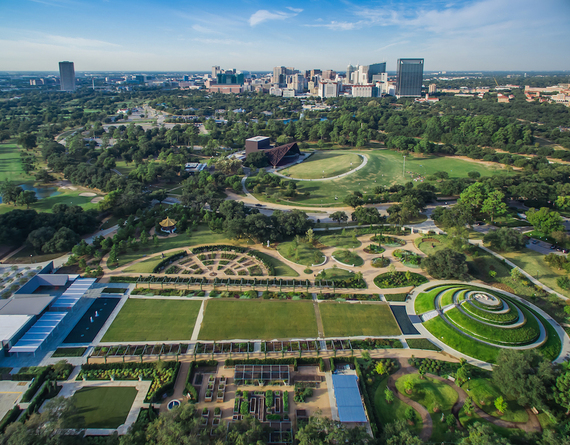 The implications of this planning and development strategy, including innovative design and stewardship models, and the resourceful use of urban fabric, will affect how we use landscape as an engine to shape 21st-century cities. As Matthew Urbanski of Michael Van Valkenburgh Associates recently stated, "A city can't be what it's not ready to be, but it can grow into what it wants to be when the time is right." Today, a little more than a century since Comey's plan, it would appear that the time is right for Houston.