Who needs fictional flying brooms and carpets when you can have a real-life Hoverboard beneath your feet?

French jet ski champion Franky Zapata is fulfilling many a flying fantasy this week with the release of an action-packed video introducing the Hoverboard, a new aquatic device that promises to take riders to new heights. 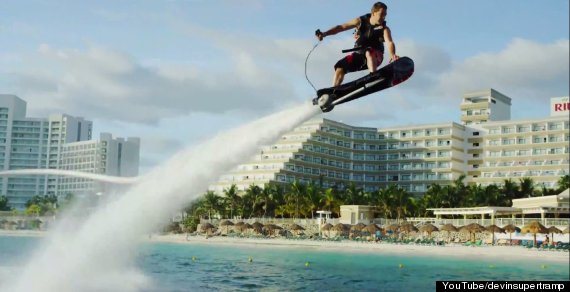 In the video, watch as people pull some truly spectacular stunts on the Hoverboard -- swirling and spinning high above the ocean.

A cousin of the Flyboard (an aquatic board also invented by Zapata that propels riders into the air with the help of two water nozzles), the Hoverboard looks a little like a wakeboard except it's attached to a single hose that propels it forward and upward with jets of water. According to the Verge, the Hoverboard can get up to speeds of around 23 miles per hour.

"If this is not the way you imagined a hoverboard would work, that's OK. It might be time to accept that the future may be better than we first imagined it," CNET wrote of Zapata's new device, which goes on sale later this month.

Now all we need is some Hoverboard Quidditch, and our fantasies will truly be complete.