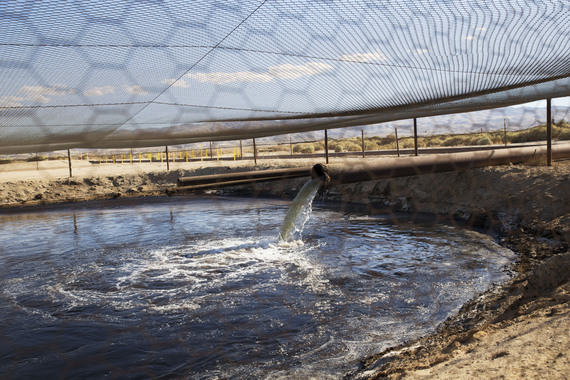 In the last decade, the combination of horizontal drilling and hydraulic fracturing--the process known as 'fracking'--has unlocked vast reserves of shale gas across the country, and unleashed a torrent of chemical pollution and environmental harm in its wake.

Plenty of unknowns remain about the environmental impacts of fracking, due in large part to a lack of baseline testing before drilling began, and industry secrecy abetted by lack of sufficient government regulations. But what we do know, compiled in a new report by Environment America Research & Policy Center and Frontier Group, is cause for alarm.

The study, Fracking By the Numbers, quantifies the environmental harm caused by more than 137,000 fracking wells permitted since 2005. Because it relies largely on industry-reported data, modest estimates of the average toll each well takes on the environment, and a patchwork of information from state and federal regulators, the report paints a conservative -- but still frightening -- picture of fracking's devastation.

Once lauded as "bridge" to a clean energy future, fracking is now clearly adding to the problem of global warming. First, burning shale gas extracted during fracking creates carbon pollution. Even more damning, methane, a greenhouse gas exponentially more potent than carbon, is released at multiple steps during the fracking process. Fracking released 5.3 billion pounds of methane into the atmosphere in 2014 during just one of these stages -- well completion -- as much global warming pollution as 22 coal-fired power plants produce in a year.

Perhaps most notorious for causing tap water to light on fire, fracking also poses critical risks to our water supplies. Fracking requires huge volumes of water for each well - water that is often needed for other uses or to maintain healthy aquatic ecosystems. At least 239 billion gallons of water have been used in fracking since 2005, an average of 3 million gallons per well.

Fracking uses vast quantities of chemicals known to harm human health, including hydrochloric acid and petroleum distillates, which can irritate the throat, nose, and and eyes; cause dizziness and nausea; and can include toxic and cancer-causing agents. People living or working nearby can be exposed to these chemicals if they enter drinking water after a spill or if they become airborne. Between 2005 and 2015, fracking used at least 23 billion pounds of toxic chemicals.

Most of the water and toxic chemicals used in fracking -- sometimes along with naturally occurring radioactive materials -- return to the surface as wastewater, causing greater risks to our waterways and drinking water. Fracking wastewater has leaked from retention ponds, been dumped into streams, and escaped from faulty disposal wells. In 2014 alone, fracking wells produced at least 14 billion gallons of wastewater.

Fracking has also left a legacy of marred landscapes across the country. Well pads, new access roads, pipelines and other infrastructure built for fracking turn forests and rural landscapes into industrial zones. Infrastructure to support fracking has directly damaged at least 675,000 acres of land since 2005, an area only slightly smaller than Yosemite National Park.

From contaminated water, to marred landscapes, to increased global warming pollution, fracking has been an environmental disaster. While we can't end fracking overnight, we can enact stricter regulations to help protect communities on the frontline of dirty drilling. We can convince President Obama to end new fracking on public lands. And for the long term, we must protect our health and climate from this dirty drilling by banning it altogether, and keeping fossil fuels safely in the ground.