That would be the same as having Texas Rangers Josh Hamilton teach your kids a thing or two about baseball. Or having Beyonce and Jay Z swing by for your weekly singing lesson.

In the world of competitive barbecuing, Chris Lilly is gold. And he's all ours.

Chris is in charge of the Kingsford "On Asswinement" team -- a group of five journalists and writers possessing a wide range of culinary skills -- brought together to experience the wonderful world of competitive grilling.

My grilling skills -- on the experience thermometer -- fall somewhere between steak tartare and rare. I'm our team's grilling newbie. But that doesn't matter. Because Team Kingsford has Chris Lilly.

We've just finished day one of an intensive two day grilling boot camp Chris put together for us to master our category -- ribs. We're being schooled not only in the art and science of competitive grilling, we're also being given an crash course in competing at a world-class level. And right now, my brain is overcooked. Well done. I'm hanging out in my hotel room at the famed Peabody Hotel -- above the sounds from Beale Street below, trying to process what all I learned today. A few random thoughts?

What's ahead? Friday is our second day of boot camp. We'll jump on our custom pit and try out our rub, wrap and secret sauce. And we're not allowed to watch television, I'm told, until we get this thing right.

And Saturday's the real show. So stay tuned. We're in it to win it. 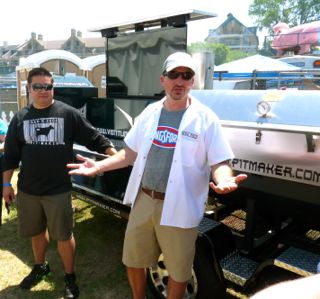 Chris Lilly (right) -- our leader. George Shore of Pitmaker is left. Our 47" LED TV is proudly peeking out in back.