Congress today thinks it's supposed to do the Executive Branch's bidding instead of doing the work of checking the Executive Branch, making laws, while also making certain bad legislation that compromises what's needed, as well as people's rights, gets stopped before it goes out the Capitol doors.

Political party power now rules over what we the people expect, deserve, and voted our elected legislators and the president in to do.

Democrats compromised on what the public wanted.

Republicans didn't care what you said.

Democrats dillied, dallied and made deals.

Democrats delighted when it was done, even though they sacrificed women's rights to do it, while the men in charge just shrugged, and one won't quit whining, as if the consequences will ever hit the boys.

"The Democratic Party strongly and unequivocally supports Roe v. Wade and a woman's right to choose a safe and legal abortion, regardless of ability to pay, and we oppose any and all efforts to weaken or undermine that right." - Democratic Party Platform of 2008 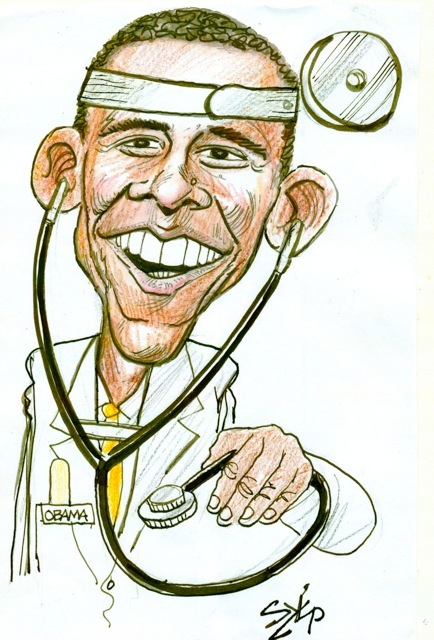 Presidents either earn the respect of people through merit or they wrangle support through sympathy. In the health care debate, it's the latter not the former for Pres. Obama.

But in the end Democrats feel they have no choice but to rescue Obama's presidency, while throwing out the public option that would have lowered the deficit further, insured more people, and actually been democratically equitable, because it wasn't forcing Americans into a monopoly system, while making full reproductive health care harder for women. The choices the Democratic majority and Pres. Obama made solidified that they would produce a bad bill. How it got this way is even worse.

For the first seven months of Obama's presidency, Barack Obama sat back and watched Congress painstakingly construct health care legislation, with all the never ending meetings, maneuvering, and Republican massaging getting nowhere. By August, the champion of health care was dead, with Sarah Palin taking center stage with "death panels," while Barack Obama was just waking up trying to figure out what had happened.

During the whole of 2009, Obama called one health care deadline date after another, only to see each one pass into history, as did the Virginia and New Jersery governorships from Democratic hands, as well as the Lion of the Senate's seat in Congress.

By the New Year, the people paying attention were in full mutiny. They now don't care who's in charge of Congress, or what party you're in, if you're in they want you out.

By March of this year, Pres. Obama had reduced himself to begging Congress to save his presidency by passing a badly flawed bill that throws citizens into a monopoly system without competition. Pres. Obama and Congress also demanding the majority voting block of the country, women, sacrifice for their ineptitude to do their job, serving up a health care bill with language that codifies the Hyde Amendment well beyond its yearly budget inclusion, going further than anything the Republicans ever tried under a right-wing Congress and George W. Bush. That's quite a feat.

The bill that Democrats are close to passing is nothing near to what the American public wants, which begins with a public option. But that goal was left in the dust of deals made by Pres. Obama and Democrats beholden to corporate interests.

Rep. Dennis Kucinich did his part after a ride on Air Force One, some presidential whispering in his ear, finally getting the attention he has so craved. It was a political move made in part to save Barack Obama, which is sad commentary when you're in the majority and have all the power, but especially because it's not Congress' job to "save" a president. Kucinich gave reasons:

"One of the things that has bothered me is the attempt to try to de-legitimize his presidency. That hurts the nation when that happens," Kucinich reasoned in a news conference Wednesday. "We have to be very careful," he continued, that "President Obama's presidency not be destroyed by this debate. . . . Even though I have many differences with him on policy, there's something much bigger at stake here for America." - Kucinich's health-care vote could be Obama's lucky charm

Mr. Kucinich's claim that a democratic process would have "de-legitimized" Obama's presidency is not only laughable, but an outlandish statement even for him. Pres. Obama has a 48% approval rating amidst economic challenges and after a horrible first year. A defeat on a bill that isn't good legislation would not "de-legitimize" him no matter how hard Mr. Kucinich huffs and puffs. Would it ruin his chance of a second term? That might be the spin of the traditional media and the elite left, but what guarantees passing the current health care bill will result in rewards? And no one has said who exactly is going to beat Pres. Obama, even if that question should be treated as relevant by Congress.

It's simply not Congress' job to save anyone's presidency. It's their job to represent the people, period.

The fact still remains that the Democrats, with the presidency and the majority, ended up producing a bad bill with only Democratic votes to pass it, something they could have done last summer.

So much time was wasted while the American public long ago tired of the lack of focus on jobs and the economy, which Democrats say the health care bill will aid, but not nearly as much as if they'd chosen the public option, which the majority of the American people prefer.

It's not exactly stellar leadership on anyone's part. But we haven't had a real Congress for decades. We simply have political parties inside the Capitol dome who either protect the presidency, if the person is of the same party, or stop the president, if not.

The reason people hate Congress is because they're doing the work of the Executive Branch, not the people. Party over sound policy is causing a revolt.

But even a bad health care bill offered up by Congress, if passed into law and signed by Pres. Obama, will make history, because it's never been done before.

As for the people, we got lost in this a long time ago. The day Pres. Obama made a deal with insurance and pharmaceutical companies, deciding that no matter if the people wanted the public option he didn't; putting himself and his presidency first, above women and the people's desires, which the Democrats in Congress helped him do.