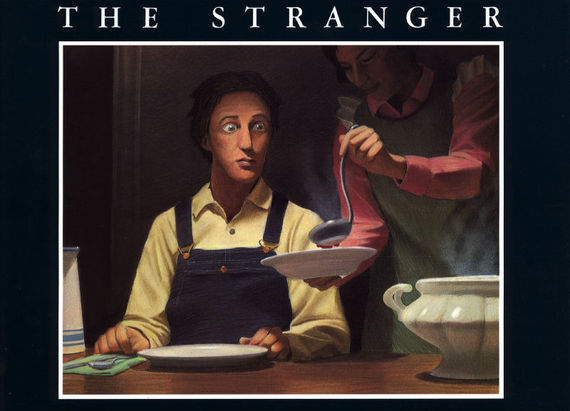 The truth of the matter in writing is that writers all too often over-complicate the notion of engaging an audience, especially when writing mysteries, thrillers, and compelling dramas. It's an understandable task because engaging an audience and keeping them engaged throughout the story is the most vital component to any story. But all too often, it's over-analyzed to a paralyzing degree (which ScreenCraft covered somewhat in 3 Ways Screenwriters Can Avoid the Paralysis of Analysis).

Enter the simplicity of a children's book that can teach storytellers to accomplish this in the most simple of ways.

The now classic children's book The Stranger is currently being utilized as a teaching tool in grade schools across the world, specifically in regards to reader comprehension.

The story follows Farmer Bailey in late summer. He has an accident. Driving along in his truck, he hits a man dressed in an unusual suit of leather. The farmer brings the stunned and confused (but otherwise unharmed) fellow back with him to his home. Farmer Bailey’s wife and daughter welcome the stranger. The doctor comes and tells the Baileys that the man has temporarily lost his memory but will probably be fine in a few days. The man stays on and becomes a part of the family in spite of his odd ways: wild animals are not afraid of him and he can work all day without sweating or tiring.

Teachers use the book as a way to teach flagging, which is a reader comprehension tool that helps students process story and character details. In particular, The Stranger offers a thrilling challenge for readers to piece together the mystery and try to come to some story conclusions of their own regarding the enigma of this strange character, all while being able to go back within the text of the book and look for the various clues that can debunk or support their theory as to who this strange character really is.

The concept behind the story is about engaging an audience, keeping them guessing, keeping them invested in the story, and therefore forcing what adults call "Water Cooler Discussions" as they discuss their own theories and the various clues that support them.

That's the sign of any great mystery, thriller, or compelling drama in the cinematic and literary world. It can just as easily be applied to comedy, horror, science fiction, westerns, etc.

Look no further than films like The Sixth Sense, Gone Girl, Memento, The Usual Suspects, Shutter Island, and beyond to see the impact that such stories have.

The Stranger does a masterful job of engaging the audience and getting their comprehension of the story going fast and strong. Not bad for a children's book, which accomplishes this brilliantly in such a simple way with few words and some amazing, but simple pictures.

Now, as this is one of the flag ship books for teaching reader comprehension, writers can learn a little bit about how an audience comprehends a story of this magnitude, in regards to mysteries, thrillers, and compelling dramas especially.

Jessica Plemons, a former kindergarten teacher, shared this flagging image, detailing the types of flags that students should seek out.

Within the grade school teachings, flagging is a tool that has students literally flag pages with post-it notes detailing various observations and questions that come up during the read.

When looked through the lens of cinema or novels, these are the very flags that audiences in movie theaters across the world, as well as readers, use to comprehend the story and characters.

If writers can view that experience through the eyes of the audience and apply that to their own stories and characters, they can truly engage an audience through the opening of the story, into the middle, and all the through to the end.

In regards to screenwriting, audiences bring their own baggage to each and every movie viewing. That's the brilliance and magic of cinema. As we watch movies, we find ways to connect with the stories and characters. We make mental notes (or flags) of them. The same can be said for anyone reading a novel.

Most important, we also begin to make our own predictions of the story with the various moments of intrigue that we are given as the movie plays before our eyes.

Where The Stranger excels is when compelling questions are offered up. At first, it's relatively simple. Who is this stranger? But as the story continues, we're given little clues that force us to flag within our own mind. When the stranger blows on the hot soup, why is a cool draft felt? Why does the doctor's thermometer break? Why do the rabbits run towards the stranger, instead of shy away from him? In the end, who is the stranger?

This is the very thought process of any moviegoer.

Movie audiences and readers begin to grasp onto these connections and questions of any great mystery, thriller, or compelling drama and begin to infer and make predictions of their own. That's part of the thrill of watching a movie and reading a book, isn't it?

MONITOR FOR MEANING AND CLARITY

A movie is so much more compelling when this is the type of experience that an audience has.

This is where audiences are walking out of that theater for the first or second time (or after re-watching it at home) and make their final evaluations based on all of the flagging they've done in their minds. This is where they form that final opinion. And that opinion often dictates the success of any given movie, leading to word-of-mouth, higher box office numbers, critical acclaim, etc.

So how can writers apply this best to their own writing?

Writers can use The Stranger and the lessons of the reader comprehension flagging method as mentor text to develop unusual, unique, and-well rounded characters of their own.

The book also masterfully showcases how to build suspense, leaving clues that are clear enough to provoke thinking and guessing but not so blunt as to remove the sense of mystery and wonder.

Building engaging suspense or mystery in any given story or genre doesn’t have to be an overly difficult deed. It’s all about inserting moments that entice an audience’s comprehension as they flag your story and characters. Make them connect by peaking their interests enough to start making their own predictions. Make them conjure and ask those questions to themselves and do so as simply as The Stranger does with few words, few pages, and beautiful but simple imagery.

The Stranger was written by Chris Van Allsburg, writer of such children’s classic as Jumanji and The Polar Express.

Many thanks to the teaching staff at the Belleville Intermediate School in Belleville, WI. Namely Mrs. Gordon and Mrs. Andersen who provided the research materials for this post.