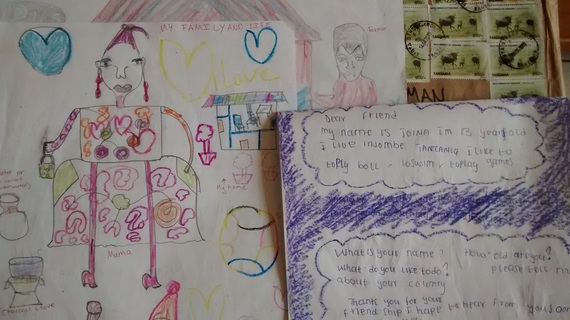 It's September 1 and I am now beginning my seventh year of teaching English at a Jerusalem high school. As I greet my new students on the first day of school, I take the time to think back to when I was a high school student in Maine and how my education there left its unique mark on my future in Israel.

When you graduate high school, full of dreams and ambitions, you never know how or when you may once again cross paths with one of your classmates. I graduated Calais High School (CHS) in 2004 and moved to Israel, making a career as an English teacher and journalist. I never imagined that I would have the opportunity to work together on a meaningful English project, as I did last year, with another fellow Mainer and Calais High graduate.

Learning English can be challenging for teenagers and I am always on the lookout for interesting projects to get my students more inspired to learn the language. When a friend of mine, Kirstin Underwood, who was a year ahead of me at CHS, joined the Peace Corps together with her husband, Paul, another CHS graduate, and moved to Tanzania, my teacher's light bulb lit up. Through Facebook, I saw that Kirstin was teaching at a school in a rural village in the East African country.

I got in touch with Kirstin via Facebook and asked her what she thought about the following idea.

How would she like to do a letter exchange between my 10th grade students in Jerusalem and her students in Tanzania? I have always believed that as educators, part of our responsibility is to open the eyes of our students to different parts of the world and get to know other cultures and countries. To have my students learn about a new country, while practicing their English, and maybe even make some new friends in the process, would be an amazing opportunity for everyone involved.

But before I got too carried away, I had to wait for Kirstin's answer.

It took a while. As Kirstin informed me, Internet access is not easy to come by in rural Tanzania, but when she finally was able to connect, she responded with a huge yes, excited to have her students learn about Israel. We decided that in addition to writing letters, we would have our students draw, so that those who had a more difficult time writing in English, could express themselves creatively.

Kirstin had 32 students, ages 13-15 in her remote village school located in the green highlands of Tanzania, and I had 25 students, ages 15-16 in the bustling, historical capital of Israel, sometimes called the city of stone.

Two months later, a brown package postmarked from the commercial port city, Dar es Saalam, located on Tanzania's Indian Ocean coast, arrived to my Jerusalem address. I was just as excited as my students to open the package.

The students gathered around my table in class, and we went over the contents together. Kirstin had written an introductory letter, explaining the language that her students spoke was Swahili and that some of her students found it difficult to express themselves in English. Kirstin herself had learned to speak Swahili fluently and used the language to communicate with her students.

"My name is Nelson," one letter read. "I am 13-years-old. I live in Njombe, Tanzania. I like to play ball, to ride a bike, and to read books. Many people who live here are farmers." Below the handwritten letter, was a colorful drawing of a boy wearing traditional Tanzanian clothing, as well as a cow and a water jar used to collect rainwater.

Another letter was from a girl named Esther who wrote about the southern highlands where she lived. She included a drawing of a girl dancing with the green and blue, black-striped flag of Tanzania in the background.

My students were excited. "This is so cool! What a great project," exclaimed one of my students, Hadas, which to the ears of any teacher is praise akin to winning an Oscar.

This was followed by a chorus of students asking if we could travel to Tanzania to meet their new friends. Or as one student, Nir, suggested, maybe they could simply become friends on Facebook instead. "The kids don't have Facebook accounts, let alone computers in their homes. And there's very limited Internet access in their area of Tanzania," I explained to them.

It was hard for Nir and some of the other students to imagine that there were places in the world where teens did not have Facebook, Instagram or other online social networking platforms, and that their only means of communicating with the outside was through the old-fashioned postal service, via written letters.

We decided that the best thing we could do was to take photos of ourselves holding the letters and drawings from Tanzania, and soon after Kirstin photographed her class doing the same. We then e-mailed the photos to each other as we discovered that Tanzania's mail service can take some time, (our package from Jerusalem arrived to Tanzania three months after it was sent), and downloaded and printed the photos out for our classes. The kids on both continents loved seeing the images of one another holding their letters.

The pen pal project gave my students the chance to not only practice their English, but to also learn about areas in our world where teenagers live without technology. Thanks to two teachers who believe in sharing experiences and building friendships across the globe, learning about two different countries became a much more personal experience for our students.

"My kids loved the chance to connect with your students," Kirstin later wrote to me. "They couldn't believe that people from so far away were writing to them."

My students couldn't either.

The article was originally published in the Jerusalem Post.