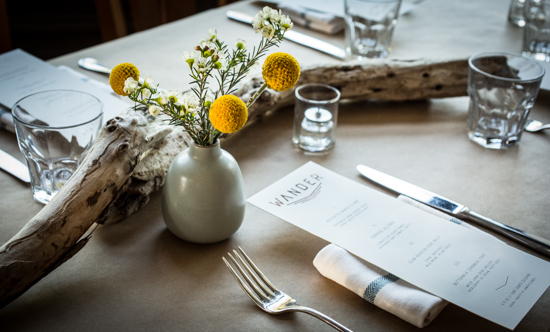 If there's a soundtrack to chef Dante Cecchini's life it's no doubt on vinyl (his name is pronounced "cha-kee-nee" by the way). At just 27 years old, Dante is capriciously classic: He still drives the 1971 Volkswagen Beatle he got when he was 18 and does all of the work on it himself. He says the V-dub rejuvenates memories of driving Highway One and exploring the California Coast behind the wheel. The car also inspired him to create Wander--brilliant pop-up meal events dedicated to "what happens when you really let go on a road trip." 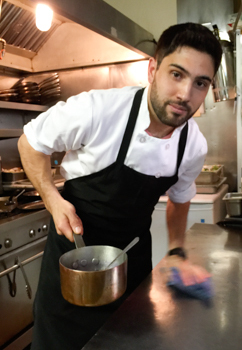 Dante will be announcing a new venture shortly, and to say San Francisco foodies are excitedly anticipating it would be an understatement. The first time I relished Dante's craft I was on the hunt for a peak plate experience--a self prescribed quest for the freshest sustainable foods--so I dined at Marlowe, San Francisco's South of Market gastropub where Dante was serving as Chef de Cuisine. This interview took place just after his third pop-up Wander event--a dinner that allowed guests to wander a culinary road less traveled. As with his second pop-up, we left feeling a part of heaven and earth...and wanting more. So I want Dante to share a glimmer of his vision for the restaurant he hopes to open one day. What of his dreams? In an ideal world, what kind of restaurant would Dante open?

It would be dinner only, at least in the beginning, maybe with a brunch so they'd have a nice daytime service. Dante says, "I believe really seasonal food, really beautiful food, can be done well for the neighborhood. Food doesn't have to be trendy or please the critics. I like modern inspiration, but I believe in classic techniques; that can be done really well and be very pedestrian at the same time." I asked if any bay area restaurants are doing anything like what he envisions and his reply was thoughtful: "Rich Table does a nice job. I love that place--they've got it down. The Progress also does a great job.

What motivates Dante? What does food do for him? He turned the question around on me: "What does food do for you?" For most of us, food is about exploration and culture. Food is not just what we eat, but how we acquire it, who prepares it, and who's sitting at the table eating it with us. Food is a ritual. Food strengthens our bonds with friends and family--and Dante's third Wander event proved it. The event also clearly demonstrated that Dante has come into his own as a chef.

How will the food expresses him on the plate is the first thing Dante considers. "This time around I really worked to highlight my strengths: colors and textures." He also prefers peak-of-season foods...a peak plate experience. "It becomes more challenging to do something different with my favorite ingredients year after year, but that's what makes it exciting," Dante says. "I often even use techniques I've recently learned." 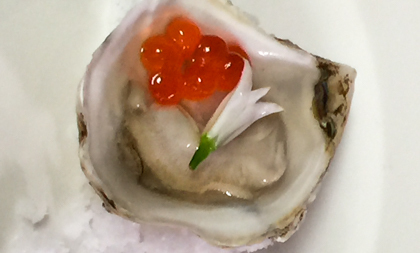 Dante was exploring horsetail shoots, which he likens them to asparagus on steroids. "They have a really interesting flavor and I love to use them, but they're difficult to pair with anything so Joe Netty at King of Mushrooms brought some beautiful wild onions. They had some gorgeous little blossoms, so I decided to pluck them--they looked terrific and they have a 'chivey' onion floral flavor that worked great with the smoked trout roe.'' Dante was happy to concede the name of his mushroom source and his praise of Joe Netty is earnest: "He's an absolute pleasure to work with. He cares a lot about chefs and always brings the coolest, most interesting things like exquisite stinging nettles. He has sources all over the world." 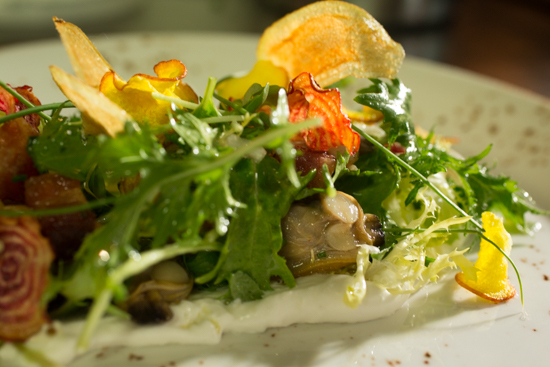 "I wanted to do something that I haven't done before with clams. I knew I couldn't steam them to order, so I marinated them and incorporated them into a salad experience. I also love the texture of potato chips with clams, but to balance it I whipped crème fraiche and folded in fresh-grated horseradish." There was also some Pork Lardon on the dish, along with a classic frisée and feinherb (a mix of parsley, tarragon, chervil, and chives) dressed in olive oil and lemon juice. 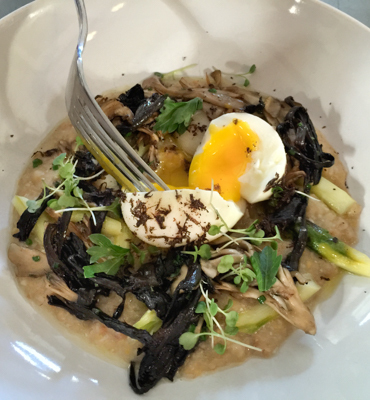 Dante coarsely ground several different grains and cooked them together for this porridge. Yes, porridge! "I wanted to let a six-minute egg be the star of the dish; it has a satisfying effect when you break into it. I had some great black trumpet mushrooms and Paragould truffles from Joe, too, so I did an asparagus and truffle Beurre Monté, blanched with butter, water, bay leaf, black peppercorn, lemon juice, and salt." The porridge was Dante's favorite dish of the night. 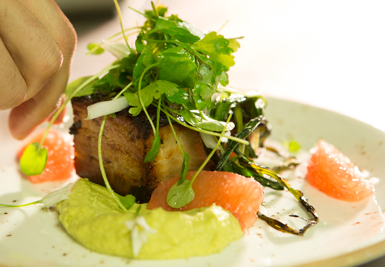 The pork skin was delightfully crispy and a perfect puree of fava sat at the base. Dante chose fava because of the beautiful neon color it turns when it's cooked and I can attest that the fava was stunning served beside a bright-pink grapefruit slice. The coup de grâce were wild onions from Joe (who was all over this menu) prepared two ways: charred tops and pickled bottoms. 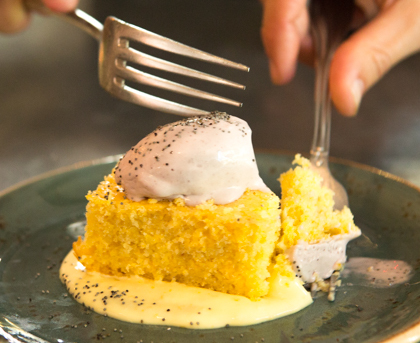 Dante's concluding course was a buttermilk cornmeal cake with Huckleberry ice cream, his self-proclaimed strong suit--although didn't use an ice cream maker. He created an Italian meringue by whipping egg yolks and hot sugar, added pureed Huckleberries and simply froze it. It was inspired by Dante's love for fresh Huckleberries and didn't disappoint. He also wanted to do a cornbread-type of dish, so he tried a number of different recipes (he ate a lot of cornbread!), selected his favorite, and then increased the buttermilk to give it a 'cakey' texture. The cornmeal cake sat beneath a kanel of Huckleberry ice cream alongside an isle of Crème Anglaise. Simply humbling.

I recently started following Dante on Instagram @dncsf (the "n" stands for Nicholas) and thanks to him I can now identify trigger melons and more--including cracker jacks (mushrooms), which he prepared with bourbon, pumpkins seeds, and BACON. My mouth watered when I saw his porcini (my favorite mushroom) English pea, and baratta dish; and my toes all but curled when I saw his corn panna cotta with lobster, smoked uni, and caviar. If I were not already a member of the choir who believes food inspires and strengthens bonds, Dante's brand of preaching would transport me there in a nanosecond. I think we should all pile in a classic bug and head up Highway One to San Francisco for the opening of whatever Dante has up his chef's coat sleeve. Who's up for a foodie road trip?

Do you know someone in the sustainable food movement (a chef, farmer, fisher, grocer, etc.) who is doing things just right? We invite you to shine a spotlight on them on the Peak Plate Facebook page--and join our community now. 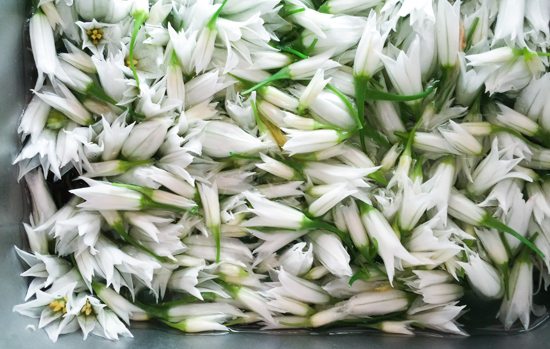