If you're a new parent and find that there's something strangely familiar with Baymax, the huggable robot star of Big Hero 6, there's a good reason for that.

"It took us a while to find just the right walk cycle for Baymax," Zach Parrish -- an Animation Supervisor on Big Hero 6 -- admitted. "But in the end, we decided to model his walk on a baby with a loaded diaper."

Which -- I know -- may sound like an odd choice. But given that this Don Hall / Chris Williams movie was basically a boy-and-his-robot story ... Well, Walt Disney Animation Studios wanted Baymax to look & act differently than -- say -- the massive-metal-man-with-a-heart-of-gold that Brad Bird dreamed up for his 1999 animated classic, The Iron Giant. Which is why -- as they tried to come up with a distinctive walk, look and sound for Baymax -- the Big Hero 6 design team drew inspiration from a lot of untraditional sources. 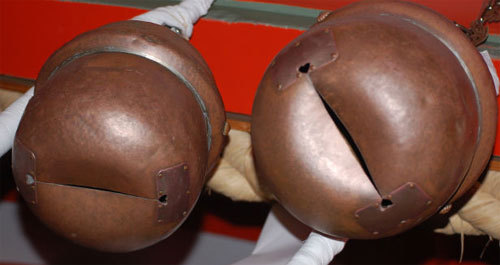 Take -- for example -- Baymax's face. Don Hall found inspiration for that minimalist shape during a research trip to Japan when he spied a well-worn set of temple bells. And as for this robot's all-tucked-away tech, character designer Shiyoon Kim says that an infomercial for a Japanese rice cooker was the jumping-off point for this particular aspect of Baymax.

"This infomercial had the cutest looking rice cooker I'd ever seen," Kim recalled. "Its design was not only simple and good-looking, it also managed to hide away all of the advanced technology which actually powered this rice cooker. Which is exactly what we were trying to do with Baymax's shape language. We wanted this character to have a non-threatening appearance but -- at the same time -- be believably powerful and heroic when this film's story called for that."

And as for Baymax's huggable inflatable exterior, that's not just some sci-fi fantasy that a Disney artist dreamed up. But -- rather -- a concept that's actively being explored right now within the robotics departments at Harvard, MIT, and Carnegie Mellon. 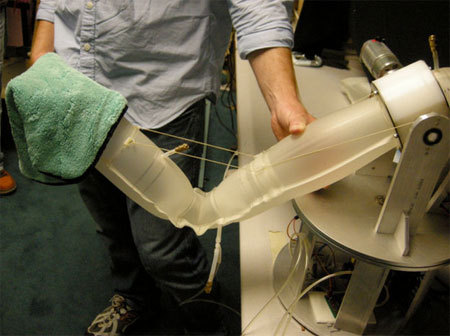 "During a research trip to Carnegie Mellon, Don and Chris were shown this soft robotics demo. They saw this robotic arm which was covered with inflatable vinyl and were then told about how this real world technology would soon be used in the medical field," Parrish continued. "And that one demonstration had a huge impact on Baymax. Not only on how this character looked but also how he moved."

Because what Hall, Williams and Parrish really wanted to do with Baymax was have this character move like a real robot. Not have him come across as just some guy in an inflatable suit.

"So we looked at the movement styles that are specific to real robotics. And to make sure that the animators got Baymax's behaviors right, they actually had to track them over the course of this movie. Take -- for example -- what Baymax does when he finds an object in his way. He will first turn, then look, then walk. And none of those actions can overlap because that's the way Tadashi programmed Baymax. This robot always has to go through a certain protocol," Zach stated. "But the upside is -- because Baymax is a learning robot -- those behaviors could get shorter and shorter as Big Hero 6 went along." 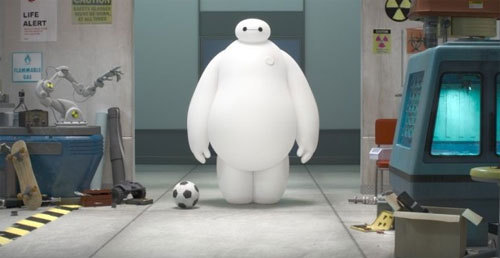 But to make sure that Baymax always moved like a real robot and didn't come across as some man in an inflatable suit, WDAS artists had to abandon the principles that they'd used for decades to get rich, detailed performances out of their animated characters. And -- instead -- they unimated Big Hero 6's robot character.

"And when I say we unimated Baymax, what I mean is that we deliberately stripped out a lot of those things that people typically associate with top quality Disney animation. Things like facial expressions, squash and stretch, overlap. With Baymax, it was all about reducing this character to his essence," Parrish said. "So when we were giving notes to the animators who were working on Big Hero 6, it was always 'Take that out. Take that out. Just go with a single eye blink.' "

"And the weird thing was -- the less we had Baymax do -- the more audiences loved him. I mean, with a character like this, a single eye blink can mean a million different things ... So the more limited his animation became, the more engaged the audience became and the more people began projecting their own feelings onto Baymax," Zach continued.

"And when you're dealing with this kind of limited animation, it then all becomes about the timing. So we'd be in Dailies for Big Hero 6 and be on the Cintiq giving directions like 'Add one more frame there' or 'Have Baymax just stand there for four frames before you then went on to his next action,' Parrish stated. "When you're giving your audience this little information to work when it comes to a specific character, it then becomes all about the subtext of the scene and if the animation that you're doing -- limited or not -- is actually supporting that subtext."

Of course, to make sure that the limited amount of dialogue Baymax has in Big Hero 6 then complemented the way this character looks and moves, the team at Walt Disney Animation Studios had to find just the right actor to voice this huggable robot. Which is where Scott Adsit of 30 Rock fame comes in.

"I was out in LA doing Celebrity Autobiography, which is this show where comic actors like me read excerpts from celebrities' books. And there were some Disney casting people in the audience that night. The next thing I know, I get a call asking me if I'd like to come in and audition," Adsit remembered. "So I go into the Animation building and I read this page of dialogue that they'd prepped for Baymax. And I wind up played this scene off on Don Hall. And they must have heard something benign and non-threatening in my voice that they really liked. Because the next thing that I know, I'm the voice of Baymax." 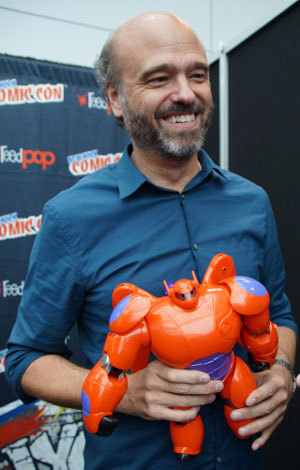 The only problem was that Scott is a very physical performer. Which meant that -- when he was in the booth recording Baymax's dialogue -- Adsit had to consciously rein himself in.

"As I was recording my lines, I'd deliberately stand there with my arm crossed, trying to be as still as possible. I mean, Baymax is programmed to be a caregiver. So my job was to sound as soft and as unthreatening as possible," Scott continued. "Mind you, the real challenge with Baymax is -- even though this robot is not supposed to have any emotions -- he still has a dramatic arc in Big Hero 6. So Don, Chris and I ... It was a real collaboration. We took all those responses that Baymax has been programmed to make and then found ways to let these tiny bits of emotion, this arc of leaning come through. Which -- I'm hoping -- then lets the audience know that Baymax has got this very warm soul deep inside."

Which -- when you really think about it -- kind of mirrors that deep-down warm feeling that every baby has when they're walking around with a full diaper (Sorry. Couldn't resist).