We have vivid memory banks stored with category after category of powerful recollections. Some memories of our parents, grandparents and other family members are so significant they shape our personalities and play a role in determining our life styles. Though our grandparents are gone they are not invisible for we are aware of their visibility through our own mirror.

I think it is important to share our family memories with our grands. Our history is part of their history. To be able to take them back in time and tell them stories about the history of their family members is important and in many instances, inspiring.

I suspect that some of my grands will read this story because last week I wrote a story about their grandfather being taken by ambulance to the emergency room of Eisenhower Hospital. I was pleasantly surprised to learn that many of my grands were reading my blogs because phone calls, texts and emails started pouring in. Our grandson, Joe, studying in China, called from Beijing!

Unlike most of my grands, I was very fortunate to have shared my growing up years well into adulthood with my grandparents. I adored them and little parts of each of them are embedded within me... their personas tied up neatly in a bow. As I was growing up I happily latched onto the positive impressions that are with me to this day. At the time, as a child, I had no idea I was doing this.

I do not believe my grands are thinking to themselves, "When I am an adult I am going to have some of my grandmother's qualities."

My goal of grand parenting is to leave a lasting and positive impression on my grands by showing them, not buying them, how to live an abundant life. I believe that though they don't realize it they are observing me and I feel certain that some of me will become part of them.

To prove my point here is my story...

I am packing for Europe and my mind flashes not on what I should pack, but back in time to my grandfather, Paul Lang. Instead of packing, I pick up my computer, put my fingers on my keyboard and write the story you are now reading.

My grandfather fled Europe all alone, as a very young man, to seek asylum and good fortune in the United States. He walked through Ellis Island, traveled across the USA, God only knows how, and settled purposely in Kankakee by the Sea. He had a relative who lived in the little town. He spoke no English, had no money. When he passed away in his 80s, he left a legacy for all fourteen of his grands to copy and admire.

My grandfather had five sons and fourteen grands. We all grew up in Kankakee by the Sea. We were known and respected as the larger than life Lang Family.

As a little girl, I observed this grandfather of mine. He was a man who spoke little, with broken English, but accomplished much. He never told me how to live my life yet he did, unknowingly, show me. And this, dear readers, is the key to being a role model to all your grands. It is not the gifts you bestow on them that will produce a solid person, it is your story and your lifestyle that hopefully will lead them on a solid journey.

As a young granddaughter I watched this grandfather of mine. An ardent observer, though I did not know it at the time, I must have admired what I saw, because as a young married woman, I noticed that many of his interests and his values became a part of me. I have wished often that I could tell him.

Every Sunday, my grandfather made the rounds to his five sons' home to visit his grands. He never stayed long but his family was important to him and he wanted us to know. Often on a Monday night we would go to my grandparents' home for dinner. We sat in the den until dinner was served, and I remember always staring at his artifacts on the den shelves.

There were the Pyramids from Egypt, animal carvings from Africa, a replica of the Eiffel Tower, Jerusalem stone carvings from Israel and that was just a start. This grandfather of mine, with no formal education who spent his young life as a poor boy in Europe and settled in the provincial town of Kankakee by the Sea, became a world traveler, traveling around the world by ship every year after he retired. And on every trip he never forgot his family. He took the time to buy each of his grands and his daughters-in-law presents from a city or a country he and my grandmother visited. I still have a ring he brought home from Egypt.

Of his fourteen grandchildren, I believe I am the only grandchild that saw the twinkle in his blue eyes when he talked in broken English of his travels around the world. I gather he and his collections left a lasting impression on me because I know I have his adventuresome spirit. I picked up on his lifestyle; he was interested in learning about cultures all over the world and did something about it...he explored. I hope I have had some impact on my grands; that they notice my lust for exploring the world and then, that they do it. You see the importance of one generation of family to the next, dear readers of mine, is how we share our lifestyles.

My grandfather left me with one of my strongest values: religion. I carry my religion as a badge of honor. Again, this was due in observing his actions when I was a little girl.

I was told my grandfather was a Talmud scholar and I thought that was very special. When I would attend my Synagogue with my family, my grandfather always sat in the first seat in the second row on the left. The entire Lang family sat behind him. He was the first member called to the pulpit to read in Hebrew from the Torah. The sanctuary was named after my family. He was charitable and gave until it hurt! My grandfather was undeniably my religious role model. I have held on to his teachings all of my life and tried to pass on the importance of Judaism to my grands. Again, you see the importance from one generation of family on to the next generation, dear readers of mine, how we continue to share our values.

As a grandmother to twenty-four grands, I deemed it very important to pass on my feelings about Judaism. I did this with painstaking effort, needle pointing most of them Tallit Bags to hold their first Tallit that I carried home from Israel. I am sure they notice a Mezuzah, a sign of faith, on every door post outside and inside our homes. They were all in attendance when I celebrated my Bat Mitzvah, many bringing their Tallit bags holding their first Tallit from their grandmother. I am continuing the tradition of Judaism passed on to me by my grandfather, from generation to generation.

I hope, as you hope, that we will remain a very positive light in our grands hearts and minds. I feel it is my obligation -- and surely it is my desire -- to bestow an abundance of good into their lives. I live a distance from all of them so they do not really have the opportunity to get everything I am able to give them emotionally. That saddens me.

I will end my musings with this thought: I am my grandfather's granddaughter not only because of wanderlust and Judaism. It goes far deeper. He was a man with a strong moral compass and his ways are now a part of me, and hopefully, they will be carried into the next generation. This is my purpose and my prayer. What is yours? 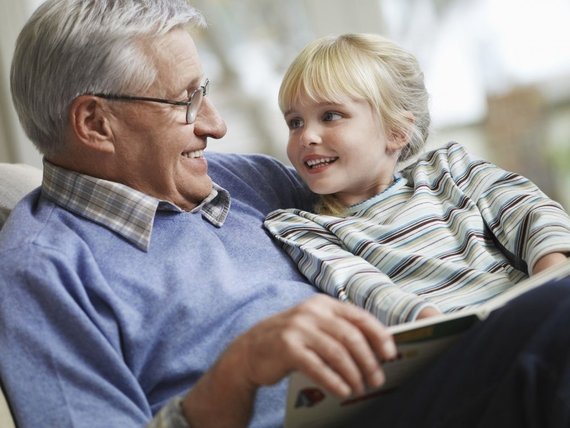