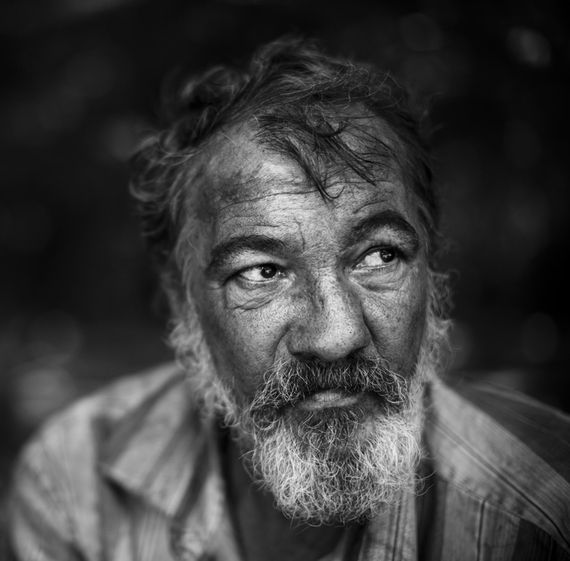 Compassion can be something that is easily intertwined with many other words: empathy, love, kindness, tolerance and even, humanity.

We live in a time where the best word to describe life is: fast. I have days that fly by so quickly that I fail to recognize I'm still wearing the same outfit I woke up in.

Life is quick and we're so busy keeping up that often times, we miss opportunities to be compassionate when they are looking us straight in the face.

I was an employee at Trader Joe's for five years. I worked many late night shifts that ended at 11:00 p.m. and I'd frequent a gas station near the store I worked at. I'd stop and pop in for a bottle of water and a snack after each shift and always noticed the same man sitting out front of the gas station. He was quiet, he was humble, he kept to himself and I didn't know much about him. I walked passed him time and time again. It was evident that he was homeless as some nights he'd be bundled up in his sleeping bag next to the drive-through car wash behind the gas station using his backpack with all of his personal belongings as a pillow. He never asked me directly for money, never said anything to me, and rarely acknowledged me.

After seeing him about fifteen or so times, I decided to stop and say hello. That day happened to be a particularly trying day at work as some sour customer really put me over the edge. I was emotional and I was exhausted. I saw him on my way into the gas station and decided to grab both he and I a Gatorade. I walked back out and plopped down on the curb next to him, handed him a Gatorade, and introduced myself. I reached out my arm to shake his hand and with a look of surprise, he carefully reached his hand back out to mine. His hands were dry, cracked, and frail, but his handshake was just the opposite; it was warm and welcomed.

He looked rough from afar, but when seated at eye level next to him I saw a man; a man buried deep beneath a weathered gray beard with sparkling blue eyes, a man whose frail body held a thousand stories. Though he didn't share much with me about how he got to where he was, his face and disposition told me more than he could ever tell in words.

My first visit with him was about an hour. We discussed the weather, our faith, a Rabbi that blessed him at a young age, and his wants and desires to start a shelter that aided homeless people.

People passed us by walking in and out of the gas station and took a double take when they saw me seated next to him. I almost felt a need to assure them that I was fine as the looks visibly came across as "Are you okay?" or "Is he bothering you?" I avoided eye contact with everyone except him, and I listened.

And then I cried.

He took his hands out of his jacket pockets and reluctantly leaned in with a look that was surely a non-verbal cue for, "May I give you a hug?" Long before his hands were out of his pocket I leaned in and I hugged him. And I cried. I cried on his shoulder.

He didn't ask me what was wrong and I was glad he didn't. I was emotional walking into our encounter after my crappy day and sitting on that curb listening to this man who was living outside a gas station and, in that moment, appeared more grateful about life than I did made me feel pathetic. He patted me gently on the back and said "I will pray for you. God listens."

I asked him if he needed anything, to which he responded, "No. I appreciated your company. Thank you."

I bid him farewell and told him I'd be back to see him again. I drove home and reflected on my one hour visit with my new friend.

This man, Alan, managed to not just touch my heart in 60 minutes, he managed to give me a wide-eyed reality check, a compassionate one, at that.

That homeless stranger, Alan, ended up giving me one of the best lessons in compassion I've had in my adult life. I thought I'd be walking into a situation to offer something to a man who was clearly in need. Instead, he asked nothing of me. He spoke gently and I listened. Nothing he said was sad or tear provoking. It was listening to a man who was grateful to those around him, grateful to still be alive and well in this world that made me cry; tears of exhaustion, self-pity over my shitty day, but more so, guilt. Guilt for not recognizing what I had right in front of me; guilt that I was driving home from my shitty day from my job in my car, to my home, to be with my family -- all things I learned my friend, Alan, did not have.

Compassion can be shown in many different ways. We can instill it in our children, we can show it to those around us, and sometimes, we can be hit by compassion when we least expect it.

Alan's thoughtfulness, his minimal words, yet incredibly large heart gave me many lessons that day; lessons in gratitude and love to name a few. He taught me to slow down, to breathe life in, and most of all, that compassionate lessons can come from places, people, and times we may least expect.

Ashley Alteman is the writer behind SmashleyAshley.com where she details her laugh-out-loud parenting and personal fails. Ashley also writes for BLUNTmoms.com and can be found rambling about dinosaurs and her wild child, "Barb Marley", on Facebook.