In the tradition of Thanksgiving, I would like to show my appreciation for the unique interfaith environment at Georgetown University. Here is a story of how a devout Muslim learned about the Christian concept of agape by engaging with the Hindu community.

Since my arrival at Georgetown, I had been eager to explore my Indian background; I participated in many cultural events such as South Asian dance festivals and Bollywood movie nights. I also became enthusiastic about interfaith cooperation after attending an Interfaith Youth Core Leadership Institute in October 2010; I realized that dialogue among Abrahamic religions were especially common due to our school's Jesuit-Catholic identity, and other institutionalized chaplaincies for Protestant, Orthodox Christian, Muslim, and Jewish students. However, inter-religious dialogue that focused on Hinduism, the largest faith community at Georgetown without a permanent chaplaincy, was relatively rare.

Due to my interests in South Asian culture and interfaith work, I always wondered whether a Hindu-Muslim dialogue event would be possible. I realized that my identity put me in a unique position to facilitate such a dialogue; my family is Indian and Muslim, and we are often viewed as the "cultural bridge" between most Indians (who are predominantly Hindu) and the Muslim community. Growing up, I had read epics like the Mahabharata and Ramayana and always viewed them as proud symbols of my Indian cultural heritage. 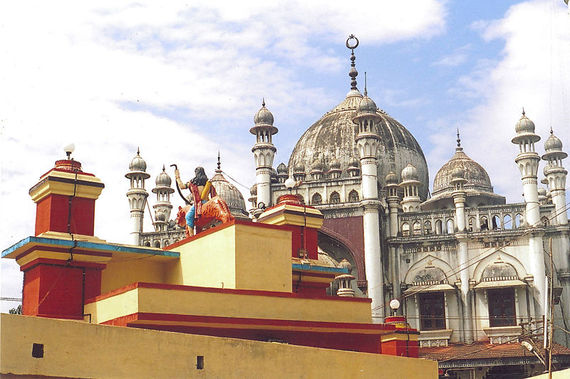 Since I was eager to discuss these works with others, I began attending Hindu pujas. I was amazed by how quickly and easily the Hindu students accepted me into their community despite my different religious background. The Hindu students went out of their way to make me feel comfortable, and were not offended when I abstained from certain prayers, rituals, and chants that I felt were contrary to my Muslim beliefs.

Due to my enthusiasm for Hindu literature, I was able to have deep, personal conversations about faith, values, and identity with my Hindu friends. I also experienced growth in my Muslim faith by reflecting on Hindu perspectives on various topics like the teacher-student relationship, just-war theory, and spiritual devotion. As I learned about these new perspectives, I became more eager to contribute in discussions with my Muslim friends, and reflect on the intersections between Islam, Hinduism, and South Asian identity. Indeed, I felt so at home with the Hindu students that I now consider their acceptance of me to be agapic. In Tattoos on the Heart, a book about the gang rehabilitation program Homeboy Industries, Fr. Gregory Boyle described agape in terms of the "no matter what-ness" of God (Boyle 52). In other words, agape means that God's love for all creation is unconditional, and is open to all regardless of what anyone might have done in their lives. For the Hindu students, it was not agapic that they accepted me in spite of some wrong I had committed; rather, it was their unconditional love and acceptance of me despite my completely different background and religious beliefs.

One aspect of puja that really resonated with me was music. I had sung and played instruments from a very young age, but never felt the need to integrate this into my spirituality. However, hearing how Hindus experienced God through music showed me that music was a sacrament, a way to connect the tangible to the intangible (God). As the Catholic priest Fr. Michael Himes describes in The Mystery of Faith, anything (a particular practice, location, or item) that helps one connect with God's grace/love can be considered a sacrament (12). For Muslims, the closest things to sacraments are our Five Pillars, which involve praying, fasting, and the pilgrimage to Mecca, among other things. However, I soon discovered that Islam did have a semi-musical tradition in spirituality, and that it was sometimes not emphasized. One form of this was the art of tajweed: eloquent, almost musical recitation of Quranic verses. I remembered the quote from Prophet Muhammad (PBUH), "Adorn your voices with the Quran" (Mishkat-ul-Masabeeh, Book 3) and the Prophet's high respect for his companion Bilal who was known for his melodious call to prayer. Therefore, I resolved to improve my own Quran recitation, and in the process, felt better connected to my own tradition.

After I shared these experiences of personal growth with both my Hindu and Muslim friends, both student organizations became enthusiastic about holding a joint dialogue event. For both communities, this event was a chance to build new partnerships and set a precedent for interfaith cooperation outside of the Abrahamic traditions. I worked with the board members of the Hindu and Muslim Student Associations to develop discussion questions on a wide range of topics. Although some of these questions revealed philosophical divides between Islam and Hinduism, we titled the event "Shanti and Salaam" (meaning "peace" in Hindi, and Arabic, respectively) to emphasize the centrality of peacemaking in both religions.

"Shanti and Salaam" was a huge success: the event, held in April 2012, drew over 40 student participants, and was one of Georgetown's most successful student interfaith dialogue events. In fact, the event was so popular that it has become an important feature of programming for both the Hindu and Muslim Student Associations every year. As a Muslim, I am glad to have experienced personal growth while understanding my Hindu friends on a deeper level, and further exploring the Christian concepts of agape and sacraments. It was immensely fulfilling to live up to one of my favorite Quranic verses which says, "O mankind, indeed We [Allah] have created you from male and female and made you into peoples and tribes that you may understand one another" (49:13).