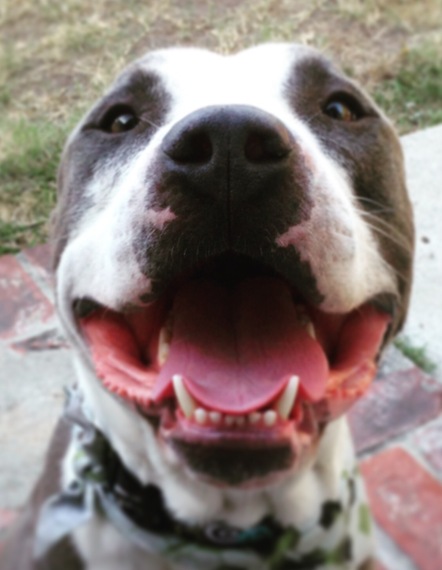 Last year, my oldest son Matthew had gone off to college, and I was commuting between DC and LA. Things at home we not as "busy" as they used to be. We still had our 15-year-old Gabriel with us, but we missed the banter between brothers that used to fill the house. It just wasn't the same anymore.

Martha had a crazy idea: "Let's go the shelter and get a dog," she told me. I was not exactly thrilled with the idea but agreed. I mean what better way to replace a kid that has gone off to college then to get a dog, right? It had to be the "right dog"; I didn't want some yappy ankle biter or some vicious pit bull. I have had many an encounter with pit bull's in dark back yards during my time on the streets.

We went to the Carson, California Animal Shelter. It's a high kill facility due to the sheer number of dogs that are brought into the shelter. We wanted to find a dog and save a life at the same time. We walked in, and it seemed like every dog was a pit bull. I was dead set against taking one home, because I knew they were a vicious breed, and I was not going to let one of those animals into my home.

While I walked along the rows and rows of cold metal cages, a dog caught my eye. He was scared, emaciated and looked like he had given up on life.

There was only one problem: He was a pit bull.

He looked at me with big beautiful eyes. I could see into his soul. I could feel how scared he was and that he just wanted it to end. I could not just walk away -- my heart would not let me. I had to at least go over and look at him.

I felt everything that this poor creature was feeling right then. He just wanted to be loved; he just wanted a home and a family.


I approached his cage. He did not move. He did not bark. He just sat there with his big head resting against the metal cage. I stuck my finger though the hole in the cage and scratched him on the head. I expected him to growl or flinch, but he did not. He closed his eyes and accepted all the love that my one finger could give him. I knew that this dog had never felt love before. I think he was enjoying every bit of the love I could give him, savoring it all until his time came to leave the earth.

Tears began to stream down my face (I am crying right now as I write this) because I felt everything that this poor creature was feeling right then. He just wanted to be loved; he just wanted a home and a family.

I called my wife Martha and son Gabriel over and told them, "I want to see if this is the dog for us." We arranged for a little private time with the dog. He was shaking as the shelter workers brought him out of his cage. Maybe he was thinking that his time had come. We spent time with him. He was so scared that he didn't move. He didn't bark or growl. It was his eyes that told us what we needed to do, so we took a chance on this pit bull and said, "We want him."

He had to stay at the shelter a few more days to get neutered, so they took him back to his cold metal cage. I felt so bad that he was not able to let him know that he now had a family. We visited him every day in the shelter until we could take him home. We wanted him to know love, to know affection and that he was important.

I know what's in those eyes: It's love, compassion and gratitude. Things I never thought that a pit bull was capable of.


It's been a year since we took Carson home (we named him after the shelter) and our lives have been changed forever. He has gained lots of weight from snacks and treats and his ribs no longer show. He has a new "little brother" in Carter, the scrappy white terrier we adopted from the shelter to be his friend.

Carson's favorite thing to do is to leap up in the air onto our bed in the morning and give us kisses with his giant pit bull tongue. He is always there to greet us when we come home with a huge smile and wagging tail. We never eat alone, because Carson is always nearby, drooling all over the floor hoping for some "nummy nummies."

Our lives are so much better because of this giant, 80-lb. pit bull. He has shown us more love than any living creature on earth ever has before. I love looking into his big brown eyes as his giant tongue slides across my face. I know what's in those eyes: It's love, compassion and gratitude. Things I never thought that a pit bull was capable of.

Taking a chance on an 80-lb. pit bull was the best decision my family ever made. If you are looking for a great dog, maybe you can find a "Carson" of your own. 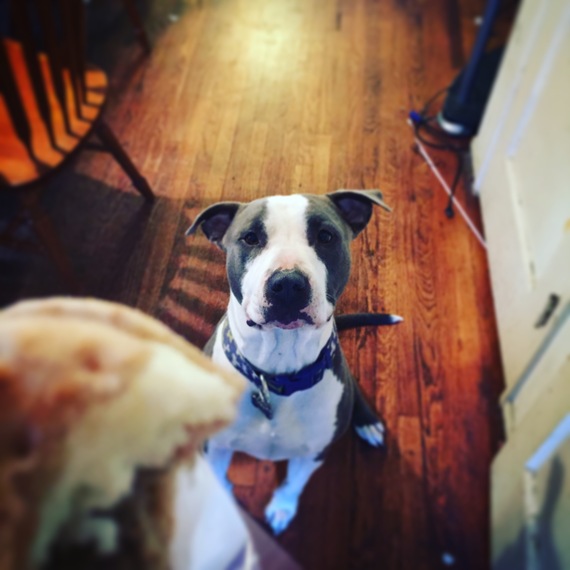