This post is by Nicole Cardoza and originally appeared on The Well, Jopwell's editorial hub.

In 2014 I founded Yoga Foster, a tech-based nonprofit that equips schools with the resources and training to integrate yoga into classrooms. Because of my work, I've been lucky enough to witness happier and healthier students in more than 500 schools over the last two years - something I find extremely rewarding. 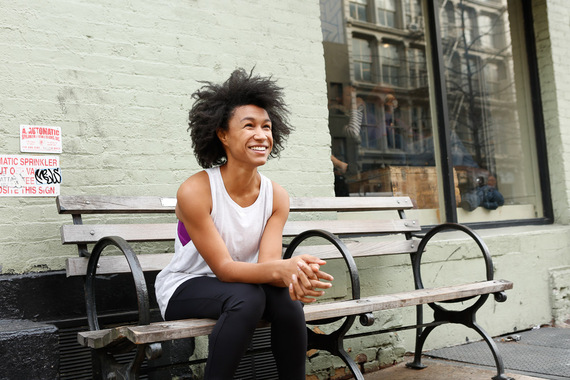 But my path as a nonprofit founder - and a woman of color in tech without some giant financial safety net - hasn't been easy.

Before I mustered up the courage to send my first "cold email," I felt trapped. My network was still pretty small, and I knew the few connections I had weren't enough to help my business adequately grow. Back then, making any sort of unsolicited ask seemed impossible. I was too afraid of getting rejected. But as I met with other social entrepreneurs, I realized that I was missing out on all kinds of potential opportunities by not putting myself out there. In fact, it was a cold email - a.k.a. an email to a person I didn't know but wanted to reach - that led to one of my biggest career milestones to date.

Last year, I attended the Partnership for a Healthier America (PHA) Summit, a conference about physical activity in schools, in Washington, D.C. I'd participated the previous year and had some luck making a few connections in person, but this year I had my heart set on establishing a partnership with Let's Move! Active Schools, part of First Lady Michelle Obama's initiative to fight childhood obesity and a subset of PHA. If I was successful, Yoga Foster's curriculum could all of a sudden be introduced to thousands of schools across the U.S., something our small team wouldn't otherwise have the bandwidth to achieve.

The summit was quickly coming to a close, and despite my best efforts (I had even crashed the fundraising dinner), I hadn't found the right person to talk to from the Let's Move! team. More worrisome was that yoga in schools hadn't been mentioned even once throughout the entire weekend's worth of presentations and workshops. Yoga Foster had just expanded from New York to schools in Pittsburgh and D.C., and one of the classrooms we support was just a few blocks away from where the conference was being held. I started thinking that if we were in their backyard and they still hadn't heard of us, the timing just might not be right. I'd almost convinced myself that we were too foolhardy to expand any further and accepted defeat.

It wasn't until the very end of the conference, when a woman took over the stage to host a stretch break between speakers, that I thought my original instincts might actually be right. Her entire routine was built around yoga and mindfulness - the very kind of stuff we teach through Yoga Foster. If I wanted to get to Let's Move!, I'd want to speak with her. She wrapped up so quickly that I wasn't able to catch her name, but, with a little online detective work, I was able to track down her profile on LinkedIn. I reached out with a quick LinkedIn message introducing myself, thanking her for the yoga break, and inquiring about her stance on movement and mindfulness in the classroom. I extended an invitation to talk further.

She messaged me back immediately! We met in person two weeks later, and I learned that not only was she professionally partnered with PHA; she's also personally passionate about yoga and its potential impact on youth. We discussed our goals, and once I told her about what I hoped to do with Yoga Foster, she quickly made the introduction I had been chasing.

Last week, we were able to officially announce Yoga Foster's partnership with Let's Move! Active Schools. We now have access to 17,000 schools and 10 million students across the United States.

As a founder, I've learned that you can spend your time waiting for the right person or opportunity to come around, or you can bring the opportunities to you. My network didn't initially include the kinds of connections required to drive Yoga Foster forward, so I learned to double-down and make things happen on my own terms. I'm proof that, when done correctly, a cold email can help you become significantly more successful. Here's what has worked for me:

Start with a quick, genuine compliment.
When you reach out to someone, especially when it's out of the blue, it's important that the respondent knows that you've done your homework. (Oh, and do your homework! Learn everything you need to know about your contact before sending that first email.) Tell them exactly what you appreciate about their craft and what their support would mean to you.

Be direct and specific with your ask.
Don't be elusive or wishy washy about your goals. Clearly explain why you reached out and how they can help you overcome your current challenge. This is twofold: it helps your contact know exactly what they'd be required to do; it also gives them something to say no to, which opens up the opportunity to make another targeted ask.

Give them what they need to help you.
If you're asking a contact to introduce you to someone else, provide a sample email for them to share. If you're asking for a financial investment, be sure to have your financial information on hand so they can quickly understand the context and make a decision. Don't leave them hanging or give them any opportunity to distracted or lose interest.

Invest in the follow up.
It can take two or three messages to climb up someone's to-do list. Brief, friendly follow-ups show that you're serious about the connection and bring you back to the top of their inbox. I even schedule when to send follow-ups into my calendar.

Show them the fruits of their labor.
Probably the most important thing you can do when cultivating a new professional connection is to show them how they made a difference by coming through for you. Don't forget to circle back and let them know how that connection or donation panned out.

These days I send dozens of cold messages a day with the intention of connecting with someone new. Many don't pan out. But many of the most important partnerships Yoga Foster has forged to date have come together from successfully knocking on someone's digital door.

Now, my cold ask for you: Our current goal at Yoga Foster is to bring a yoga program to every single one of the 17,000 schools we now have access to - and we need help. A $20 donation sponsors a student for an entire school year. Don't hesitate to send a cold message to me on LinkedIn or Facebook to learn more.

Jopwell helps America's leading companies connect with and recruit Black, Latino/Hispanic, and Native American professionals and students at scale. Sign up to find your dream job.

Stories & advice to help you navigate your career