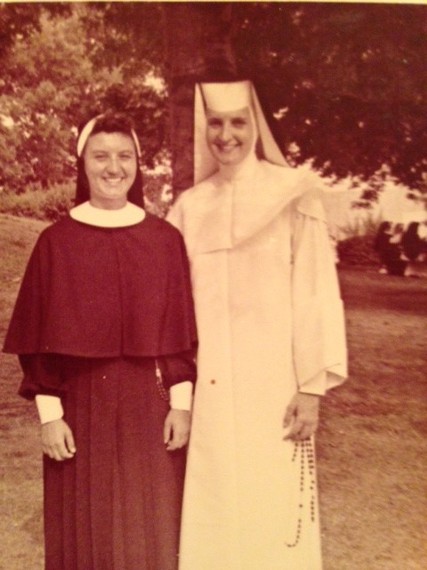 Sister Maria (left) and Sister Jorene (right) on August 30, 1964, the day Sister Maria became a postulant with the Dominican Sisters

Dominican Sisters of Hope Maria Barbera, OP, and Jorene Cieciuch, OP, encounter each other as any two sisters would: hands entwined, kisses on the cheek, both beaming. When they meet, it's obvious that they've been friends since before the Dominican Sisters of Hope was founded, since before Maria was a Dominican Sister at all, for fifty-six years, exactly. It's not obvious, though, that Sisters Maria and Jorene have taught each other languages, revisited homelands, and become family when biological family was lost, long before becoming vowed sisters.

The year was 1958. Sister Jorene, then called Sister Helen Roberta, was a music teacher at St. Mary's School in Gloucester, New Jersey. Maria was another noisy seventh-grader in the back of music class.

"I was teaching them to sing the Requiem Mass, and Maria was talking to the young man next to her, which was not good," Sister Jorene recalled.

Sister Jorene asked Maria to report to her office after school, but what was meant to be a disciplinary meeting turned into the beginning of a friendship. The two immediately hit it off.

"I always admired her," Sister Maria recounted of Sister Jorene. "She was very spiritual, prayerful."

Sister Maria ushers me closer to show me a photo on her phone of the pair: the photo was taken on August 30, 1964, the day Sister Maria became a postulant with the Dominican Sisters. Sister Maria stands in a novice habit, young and bright-eyed; Sister Jorene proudly stands next to her, tall, youthful, elegant. Sister Maria points to Sister Jorene, then in full habit, and quietly, with a smile, asks, "Wasn't she beautiful?" 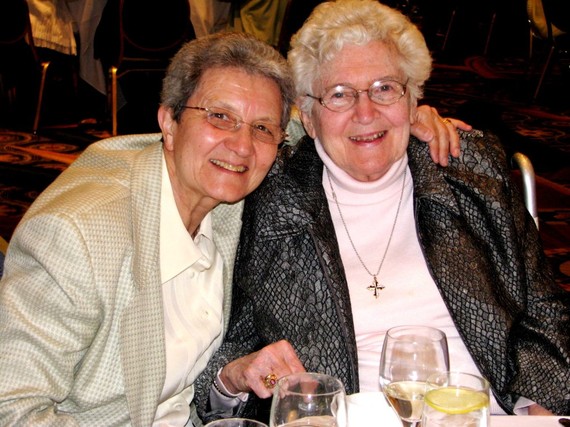 In 1958, when the sisters first met, Sister Maria's mother was dying of cancer, and her grandmother, who spoke no English, was coming from Italy to care for her. Realizing that the impending language barrier would ban her communication with Maria's soon-to-be guardian, Sister Jorene asked Maria to teach her Italian. Maria agreed, and she got permission to meet with Sister Jorene after school in the sitting room of the convent to teach Sister Jorene her native tongue. As time went on, the impromptu lessons continued.

"One afternoon, we were driving and there were quite a few cars on the road, so I learned to say 'Ci sono molti automobile in questa strada oggi,'" Sister Jorene recounts. It was her first sentence of many in Italian.

Sister Jorene often visited Maria's mother before her death and, armed with her newfound Italian proficiency, she was able to befriend Maria's grandmother, as well. ("She was a lovely lady, and I was so very sad for her," Sister Jorene said. "She was very warm. She was also a wonderful cook.")

The family-connection didn't stop there. After Sister Maria took vows as a Dominican Sister in 1972, Sisters Maria and Jorene traveled to Maria's hometown in Messina, Italy, where they met Sister Maria's family, took daily swims in the Mediterranean, and made sauce with Zia Maria.

Now, the two gather at a celebratory dinner for Sister Maria's fiftieth anniversary as a Dominican Sister, and they recall tales of learning to make sauce off the coast of Italy, of the bottles of sauce that Maria's family insisted they take back to the States. Their hands are entwined and they are giddy with memories, each inserting words of Italian sporadically. They laugh about Sister Maria's tendency to talk through class as a student, about Sister Jorene's mother's complaint that she got to speaking Italian better than her native Polish, about the clearness of the sea on their vacation.

"Gosh, we did so much, didn't we?" Sister Maria says with her arm around Sister Jorene, shaking her head gently.

In this moment, fifty-six years after their first meeting, they don't quite look like a teacher and a student who became friends and eventually became fellow vowed religious. They look like family.