Under the metallic glow of New York's Chrysler Building, as I chatted with a new friend after work, I was shocked to hear a sophisticated Manhattanite say she was dying to visit Marfa, Texas.

"Marfa? That little town way out west by Fort Davis?" I asked.

"Everyone in New York is going there -- it's on my list."

"Didn't you know? It's a chic artist colony!"

Upon going home and doing some research, I learned that the minimalist artist Donald Judd fled the New York art scene for Marfa back in the '70s, and slowly established it as an arts destination that was now enjoying serious notoriety. But as a Texan myself, I had not gotten the memo.

When I moved to New York alone in 2006, I learned to conceal my Texan identity. Bush was in the White House and, while I was a registered Democrat and markedly not a Dubya fan, my affection for the Lone Star State had made me an accomplice to his policy-making, and New Yorkers weren't afraid to tell me so (I learned quickly that they weren't afraid of anything). I was actually quite liberal, an art lover, not exactly the stereotype of a rifle-cocking, flag-raising Southern yahoo. But I also had a warm place in my heart for Texas: my friends and family, my tiny church, Sunday afternoon barbecues, the massive sky, the desert that stretched on forever. 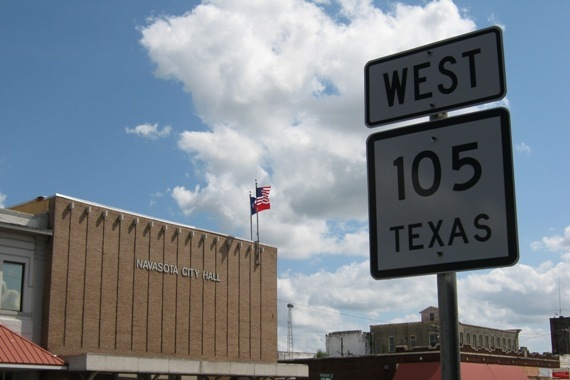 I grew up in Spicewood on a dry, rocky, cedar-covered hill between Austin and Marble Falls; to call it a town would have been a real stretch. Back in the '90s there was no H-E-B grocery store, no Dairy Queen, no drive-through beer barn, no courthouse, no school -- nothing that would characterize an actual community (those things were 30 to 45 minutes away by car). Spicewood was meagerly populated with just a handful of small houses and trailer parks, and the fact that we lived in a house without wheels put us at the top of the socio-economic scale. The school bus picked me up half a mile from our house, and our mailbox was a mile away on the side of the highway. We had two horses and three goats, I did 4H and barrel-racing was my favorite hobby.

After my rural upbringing and graduating from Indiana University, I moved to New York to kick-start my career in arts administration. I'd long suspected I was a city-girl at heart, and thirsted for Manhattan's ambition and world-class culture. I pictured myself in a flouncy black dress and Mary Janes, taking the subway to work at Carnegie Hall, then going to see new exhibits at the Museum of Modern Art on Friday nights. My theory was that country folks either stayed in the country forever, or moved to the city and never looked back.

When I first arrived in New York, I was naïve and told people without hesitation that I was from Spicewood, Texas. In response they usually said, "Oh, I'm so sorry," with that sneer that only New Yorkers can properly deliver (to be fair, many Texans have their own sneer for Yankees who travel below the Mason-Dixon). These New Yorkers had no idea where Spicewood was, but they knew it wasn't Austin -- the only quasi-acceptable place to come from -- so if I wanted to fit in, I had to lie a bit. And, as a lonely newbie, I desperately wanted to fit in. I wanted my cosmopolitan peers to like me so I could make the city my new home. So I struck "ya'll" and "fixin'" from my vocabulary and suppressed my very slight accent. And for years, if a New Yorker asked me where I was from, I would say Austin. And if they heard Boston, I would not correct them.

In more recent times, after the memory of Bush began to fade, I noticed that ever so slowly, popular New York culture started embracing Southern things. First it was trucker hats, then PBR. Then it seemed like mesquite barbecue, breakfast tacos and live country music lurked around every Brooklyn corner, and all the indie bands were clamoring to get into South by Southwest (which I've still never attended).

So in this burgeoning Obama-era environment, I started being more forthright about my origins, and this time the reception was totally different. The almost unilateral response was "Spicewood, that sounds nice!" I suppose spices and woods conjure up a pleasant image. Eventually "nice" was upgraded to "Wow, that's awesome!" People's faces lit up upon learning that I used to wear spurs and a black felt cowboy hat. They were even upset when I said I didn't have those items in my wardrobe anymore.

A few months ago I was at a rooftop bar in Brooklyn, listening to a woman tell me she really wanted to go camping in Big Bend National Park out in West Texas. And then someone mentioned vacationing in Corpus Christi on the Gulf, then Dripping Springs in the Hill Country, then Amarillo way up in the Panhandle. I'd never been to the Panhandle myself, and before I knew it, I was taking notes from a New Yorker on where to get off I-40 to have a steak.

Now that it's cool to know Texas, I don't have to hide my rodeo ribbons anymore. Hill Country Barbecue in Chelsea is packed every weekend and hip young dudes wear bolo ties like they've been doing it since birth. Lobo in Park Slope serves Tex-Mex queso as regional cuisine and you can buy a pair of Lucchese boots at Western Spirit in TriBeCa. And that's fine with me -- I've got dual citizenship, and I'm finally proud of it.