Pundits are still fighting about the autopsy results of Hillary Clinton's campaign.

Some have argued that James Comey is responsible while ignoring the reason why the FBI had to investigate Clinton in the first place. Others blame the existence of the Electoral College. But if the popular vote mattered, Donald Trump and Clinton would have never bothered to step foot in Michigan or Wisconsin and would have campaigned in just six states.

And blaming racism is a last lazy hand-grenade lobbed from a defenseless position. It ignores the 2008 and 2012 elections while vilifying 60 million American voters. To understand why Hillary Clinton, lost look at Clinton herself.

When Hillary famously asked "Why am I not winning by 50 points?" it was clear she didn't ask from in front of a mirror. Dissect her campaign and look at the results it produced.

The 2016 election came down to the plight of Rust Belt voters in Pennsylvania, Ohio and Michigan. A man who dies of a gunshot wound may have gangrene in one arm, terminal brain cancer and a 105-degree temperature when the gun fired, but the autopsy will still show it was the bullet that killed him.

Hillary Clinton ignored her husband's advice and thus neglected the Rust Belt when campaigning. The Rust Belt ultimately rejected her. These rural voters -- who heavily supported Barack Obama on the prospect of hope and change -- voted for Trump in what they may believe to be their own economic self-interest.

The title of this editorial recalls Harry Truman standing on a train, a copy of the Chicago Daily Tribune in his clutches on the day he defeated Thomas Dewey. But it wasn't what Truman was holding that mattered. It's what he was standing upon. A train. 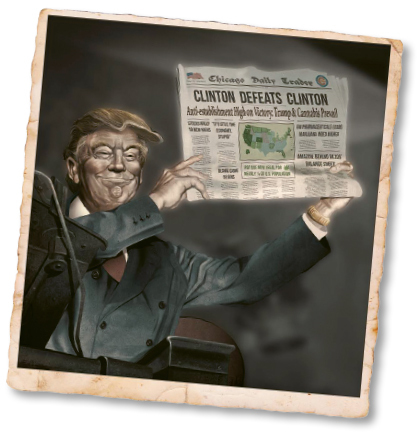 Before the rise of aviation, politicians campaigned across the nation by train, a lost practice in the era of convenience. It's just intriguing that the easiest way that one can witness the demise of the Rust Belt sits less than a half-mile away from Clinton's former Senate office. The Capitol Limited is a 780-mile Amtrak route from the nation's capital to Chicago. It traces several hundred miles of flyover country, a slow burn through the Rust Belt and the remnants of a 20th-century economic boom. Politicians en route to Chicago clearly prefer the two-hour flight to an 18-hour train ride. But if Clinton or any other Democratic leader had simply boarded the train, they might have seen first hand what this stretch of land has become over the last 40 years.

Braddock, Penn., not far from Pittsburgh, was once a cornerstone of the nation's industrial era. Today it's a tragic stretch of abandoned homes, crippled storefronts and dilapidated industrial buildings. The city has lost 90% of its peak population over the decades. The same problems can be found along the towns surrounding Harper's Ferry, West Va.; Garfield, Ohio; Sandusky, Ohio; and Waterloo, Ind., all the way to Chicago.

This is where Americans used to make things, the backbone of a rich and great economy. In these towns there are no "up-and-coming" neighborhoods, no HGTV fixer uppers, no grand plans to push capital back into desperate communities. From the train window, all one sees are the skeletons of something once great, something gutted in favor of cheap Chinese imports and trade deals that underestimated the economic impact on middle America.

What, again, was the message?

For all the pain, Trump at least had a message, no matter how elementary. "Make America Great Again." The nostalgia burned. It was something else to long for. Even in the face of uncertainty in the future, the present is a losing reality for these voters. Clinton's team didn't understand the people who walked into the ballot box; a sentiment recently shared by her former rival Sen. Bernie Sander (D-Vt.). Lord knows they tried to connect with these voters, just in the most "Washington" way possible.

Clinton's team tested 84 slogans in focus groups and came up with "Stronger Together," which was similar to the rallying cry of a school-yard hockey team in the film The Mighty Ducks.

This list also included "Fairness First." How on earth did that one fail? Was it because it reads more like the demands of a kindergarten class president than the leader of the free world?

Bill Clinton's 1992 campaign thrived thanks to a simple realization in politics: "It's the economy, stupid."

What was Hillary Clinton's economic plan? A month after the election, can anyone recall one forecast, one figure, one detail? Does anyone remember her October speech in Warren, Mich.? Highlights included massive infrastructure investment (temporary work), connecting all Americans to broadband by 2020 (temporary work), a clean-energy grid (though green jobs kill more carbon-energy jobs), and government seed investing for the technology sector (because we need government in venture capital). For months, Clinton touted "advanced manufacturing," you know, the kind that doesn't need human labor. It's a good thing the campaign didn't chose another tested slogan "Rise Up," which sounds like an ascension of job-stealing robots.

A 46-year-old man who worked an assembly line or shoveled coal isn't going to start retrofitting windmills, a peculiar fascination of Beltway liberals when they champion the "Green Revolution."
Trump promised to drag companies back by their balance sheet. To return the coal industry back to what it once was. Trump's promises likely won't happen, but neither was the prospect of putting solar panels all around eastern Kentucky or Sandusky, Ohio where the coal jobs have vanished.

For a person with a nasty history of lying, Clinton chose the wrong things on which to deceive.
Trump even trumped Clinton's push for $275 billion in infrastructure spending in five years by offering to double it.

Clinton's other half of the Warren speech was exactly what people have grown tired of -- a career politician talking like a politician. She championed the hard work of her father, and said she never forgot where she came from. That's hard to believe from someone who hasn't driven a car in 35 years and threatened to kill off the coal industry once and for all. The personal reflection on "hard work" - like the entire campaign - was the product of survey and focus groups.

Bill Clinton once said "I feel your pain," a turning point in the 1992 election. Hillary's team asked focus groups to describe working-class pain. Then they chose the language that offered the highest probability of an applause. Then they hired a team of PR consultants operating from an Alexandria-based office overlooking the Potomac. Or were they in Georgetown? None of them actually knew what it felt like to lose a job and a house in a period of two weeks. Trump, meanwhile, dug a finger into voters' wounds and screamed, "Do you feel that? You know who did this to you!"

Clinton's team failed to understand these people want a long-term vision and stability, not a government handout or instruction book on how to install solar panels. It was all part of the same laundry list of ideas proposed by Obama in 2008 and 2012.

Clinton embodied everything that Americans have grown tired of. She profited immensely from her public resume, earning more in 30 minutes giving a speech to a bank than many Rust Belt voters earn in six years. One must lack a moral code to deny the crony nature of the Clinton Foundation. One must suspend all belief in common sense to think that a private server was initiated for matters of convenience when an uncovered e-mail from 2009 said that "HRC does not know how to use a computer to do e-mail, only bb [Blackberry]."

How is it that out of the 45,000 e-mails released from her campaign manager John Podesta, it's a Herculean effort to find one e-mail about improving the lives of the working-class and this nation's economy?

Trump's flaws are well documented, but the President-elect has proven to be a winner on the highest possible stage. His history of deal-making may propel him into a successful first 100 days. An opening exists for tax reform, infrastructure deals and dramatic reductions in bureaucratic red tape. But the President-elect must avoid the pitfalls of the past.

Back in the 1970s, the last time that Washington engaged in significant deregulatory efforts, it helped unleash an economic boom. In the process, many Americans were left behind. Reductions in taxes and regulations benefited the capital class far more than the working class. In the 1980s, many people raced to start businesses and engage in new forms of commerce. Unfortunately, when everyone took off from the starting line, few looked back to see millions of Americans still at the gate uncertain of where to start in this new economic world. Looking forward, Republicans would be wise to understand that not everyone has the same understanding of entrepreneurialism, the same capital access, or the same education. Crafting policies that improve all three conditions will help Americans benefit, regardless of gender, race, or creed.