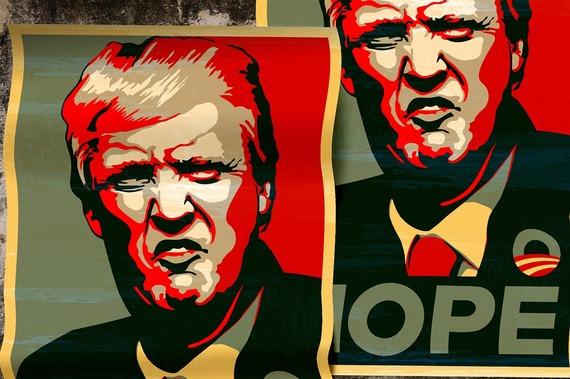 Donald Trump's munchkins would have us believe that the new American president is going to usher in a period of prosperity for the United States and the world.

But Nobel Prize winner Paul Krugman and other top economists believe Trump will make policy mistakes that will touch off a global recession, if not a depression.

"When the United States sneezes, the rest of the world catches a cold," is a longstanding maxim about the global economy that became only too true again in 2008.

In fact, many countries are still struggling to right their economic ships seven years after the crisis struck.

Those countries include three of the largest economies in the former Soviet Union -- Russia, Ukraine and Kazakhstan.

One of the greatest ironies I could envision under a Trump presidency would be the Donald sparking a global recession that further roils Russia's economy.

I doubt he will be able to refrain from starting the trade war he has threatened against China, which he complains is not playing fair against the United States in bilateral commerce.

Given that economics is so complex, whatever Trump does has the potential to generate unpredictable consequences that, together, tank the global economy.

Let's say he slaps a 35 percent duty on Chinese goods coming into the United States, as he has threatened to do.

An immediate consequence would be middle-class and poor Americans paying more for Chinese goods, many of which they would be unable to obtain from other sources. This would likely make the "angry white men" whom Bill Clinton said Trump was able to appeal to in the 2016 election even angrier -- but this time, against Trump.

Then, of course, there would be the Chinese retaliation against a hefty duty on their goods.

No one knows what the retaliation would consist of, but one thing is certain: It would be designed to hurt the U.S. economy -- and it would likely do so.

I don't think even Krugman could predict how quickly a U.S.-China trade war could spread economic malaise across the globe, or how much damage it could do. But one of his, and other economists', biggest fears is an amateur economic policy-maker like Trump letting any angry cat out of a bag that no one could get back in without massive clawing of the furniture.

A key reason the wrong move by Trump could hammer many of the already weakened economies in the former Soviet Union is the sorry state of the region's banks.

Two announcements in the past week brought this weakness home: the revelations that Ukraine was nationalizing its biggest bank, Privatbank, and that Kazakhstan was providing an emergency loan of $4.5 billion to keep its biggest bank, Kazkomertsbank, from going under.

It should come as no surprise that in graft-ridden Ukraine, corruption was a key factor in Privatbank's travails.

Privat was bleeding cash due to the recession and questionable loans, a full 97 percent of which were made to companies connected with its shareholders. Talk about loaning money to insiders that you never expected to get back!

Kazakhstan's financial system has never recovered from a greedy loan policy that almost all banks employed before 2008, and the theft of about $15 billion at two of its largest banks.

The greedy policy was borrowing money at 5 to 7 percent from the West, then loaning it out to Kazakhs at 14 percent or more, and pocketing the difference. The bottom fell out when the American-sparked global recession landed on Kazakhstan, and many Kazakhs were unable to repay their loans.

The thefts involved the chairman and vice chairman of Alliance Bank absconding with $1.2 billion and the chairman of BTA, a world-class scoundrel named Mukhtar Ablyazov, stealing a whopping $14 billion, then fleeing to the West.

Just this month, Ablyazov fooled France's highest administrative court, the Council of State, into believing his claim that he is a dissident who would be punished for his political views if he had to go to Russia or Kazakhstan to face embezzling and other charges.

Dissident my foot! Martin Luther King Jr., Mohatma Gandhi and Nelson Mandela were dissidents. Ablyazov is a common criminal -- albeit a big-time one.

Russia, whose economic problems have affected countries like Armenia that are tried to its economy, had to bail out some of its biggest banks earlier than Ukraine and Kazakhstan did.

The bailouts were needed because of a drop in the price of oil, the mainstay of the Russian economy; Western sanctions that hurt Russian banks' ability to borrow in the West; and a plunge in the value of the ruble.

Russia desperately wants the sanctions to end, because they're keeping its economy from recovering.

Just how angry Moscow is about the sanctions came to the surface this week when the Russian government screamed about a new round of sanctions. Barack Obama slapped the punishments on six high-ranking Syrians and nine board members of a Russian bank connected with the two countries' brutal crushing of opposition forces in Allepo, Syria's second-largest city.

Russia hopes that President Vladimir Putin's buddy Trump will lift all the sanctions the United States has imposed since the spring of 2014, when the Kremlin seized Crimea and sent thousands of troops to help eastern Ukrainian separatists ward off government forces.

Putin has worked hard to stroke the ego of the narcissist Trump, so the new American president may well lift the sanctions.

That would be an injustice, since it would send a message that Putin could impose his will on his neighbors with impunity.

I do believe that Trump will lift the sanctions, although there will be a nasty political battle over the issue in the United States between the Trump forces and those Americans who still see Russia -- as I do -- as the gravest threat to democracy.

If he does lift the sanctions, I hope Trump starts a trade war with China or makes some other economic miscalculation that slams the global economy so hard that it further damages Russia.

The only way the Kremlin can be slowed from trying to reconquer more of its neighbors is if its economic problems are so bad that it has to spend energy and money dealing with the economy instead of unleashing its military on others.