Last Wednesday, Ozgecan Aslan, a 20 year old psychology student, got on a mini-bus heading home from college. When her friend got off the bus, Aslan was left alone. What happened next is so heinous that it has not only shocked people across the globe, but led to massive protests in her home country of Turkey.

The driver, a 26 year old man known only as S.A., took her to a remote location and tried to rape her. When she fought back using pepper spray, she was bludgeoned with an iron pipe and stabbed multiple times. The perpetrator then sought help from his father and a friend who burned and subsequently dumped Aslan's corpse. Authorities found Aslan's charred remains two days later in a riverbed in her hometown of Mersin in southern Turkey.

The driver, his father, and friend were arrested, but that has done little to appease protestors who gathered by the thousands across Turkey last weekend calling for an end to violence against women. Aslan's brutal murder has become a rallying cry for protestors and activists, as evidenced by the hundreds of placards bearing her image which have been displayed during protests. The protests are not just a reaction to Aslan's vicious murder, however, but two other factors as well.

First, there is increasing frustration that the government, led by the Islamist Justice and Development Party (AKP) since 2002, has done little to address the issue. In fact, many believe the AKP have contributed to a climate in which gendered violence can flourish. Controversial comments by key party officials, made largely before Aslan's murder but widely distributed on social media in the aftermath, have contributed to the growing sense that the AKP is not only insensitive to the plight of women, but sympathetic to the perpetrators.

Late last year, for instance, President Recep Tayyip Erdogan made the case that women are not equal to men. Speaking to a meeting of the Women and Democracy Association (KADEM) and the Ministry of Family and Social Policy, the president said it is impossible to speak about equality between the sexes:

He has also argued that every woman in Turkey should have three children and the need to limit both abortion and the morning-after pill:

Our religion gave women a place - motherhood. It gave a mother another place. It laid the heaven beneath their feet. Not beneath a father's, but a mother's feet. However, this might not be understood by everyone. You cannot explain this issue to feminists. They do not accept motherhood.

Similarly, ruling party parliamentarian Ayhan Sefer Ustun sparked outrage when he declared: "A rapist is more innocent than a rape victim who chooses to have an abortion." Even before Aslan's murder, many feared that these types of comments helped fuel an alarming increase in gender-based violence.

And it is just that -- the soaring rates of violence against women in Turkey -- which has most directly prompted protestors to take to the streets. The statistics, at least as far as they are known, are alarming. According to data gather by the "UN Women: United Nations Entity for Gender Equality and the Empowerment of Women" as of December 2012 39% of women in Turkey were likely to experience physical violence by an intimate partner in their lifetime, while about 15% were likely to be victimized by sexual violence.

Compare that with statistics from some other European countries including Germany where 23% of women experienced physical violence by a partner and 7% experienced sexual violence), Italy (12% and 6% respectively), Ireland (13% and 8%), the United Kingdom (19% and 4%), as well as the United States (22% and 8%). 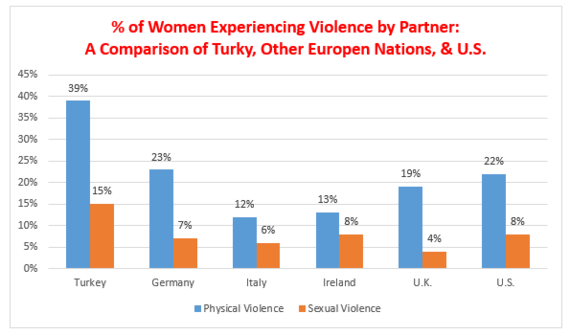 It is also telling to compare the data from other countries with a majority Muslim population. For instance, Egypt where 33% of women experience physical violence by an intimate partner in their lifetime and 7% experience sexual violence, Jordan (21% and 8%), and Tunisia (20% and 14%). 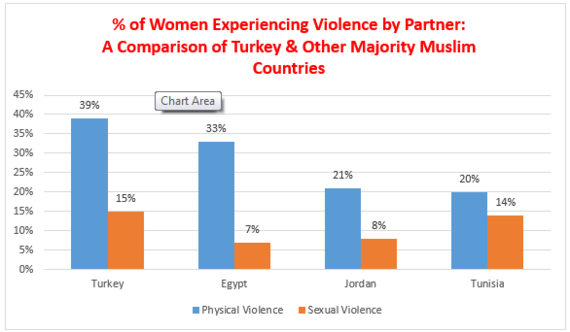 Whether in comparison to European or other predominantly Muslim countries, Turkey does seem to exhibit higher rates of violence against women.

One key problem as it pertains to understanding the situation in Turkey (i.e., whether gendered violence has risen, if so how much, and how it compares to other nations) is that the data are either difficult to access or not trustworthy. Lawyer and activist Hülya Gülbahar told the Hurriyet Daily News that according to official statistics, between 2002 and July 2009 there was a shocking 1,400% increase in the number of women murdered. The release of that figure caused such an outcry that according to Gülbahar "since that day we have not been able to access official statistics, as they are not being released."

Another well-known Attorney Vildan Yirmibesoglu said that "[i]n 2012, the Family Ministry reported that 155 women were murdered, yet when we go through the news we add up at least 210 for the year."

The lack of data (or the absence of trustworthy figures) has led to many questions including whether there has actually been a sharp increase in violence or if societal focus on the issue has just caused it to be more public?

Without official government data, much of what is known comes from various non-governmental agencies, foundations, non-profit and other associations combatting violence against women. As noted earlier, one such organization is the UN. Another less well-known is Anit Sayac a website which its founders describe as "an on line (internet) monument" designed "to commemorate women who lost their lives due to domestic violence."

The site contains a statement regarding how the data are collected and the difficulties the site had getting a response from the government:

Various requests were submitted to the Ministry of Justice, Ministry of Family and Social Policy and General Directorate for Security concerning data on women. As they remained fruitless, a media search has been made between 2008-2013

The data collected are then compared to those compiled by the "Platform for Stopping Homicide of Women."

For all the difficulty its creators have confronted collecting the data, this dramatic on-line monument shows a clear increase in the number of reported murders. Whereas there were 61 documented cases in 2008, the first year the data was compiled, the number increased to 287 in 2014, the last full year of recorded data. 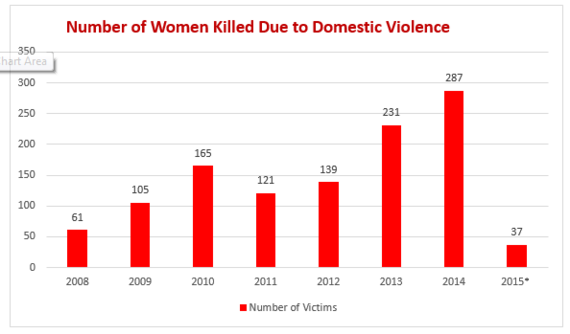 The monuments main goal is to serve as a stark, vivid and public reminder of the number of women who continue to be victims of domestic violence. The counter is organized by year, the names of the victims are display on the "wall" and users can click on the name of a victim to learn more about the circumstances surrounding her death. Victims like Dilek Avci, the first woman memorialized on the wall in 2008 and Neriman Aktarmaci, the 37th victim killed so far this year. And sadly, it doesn't seem to be much of a stretch to say "so far." 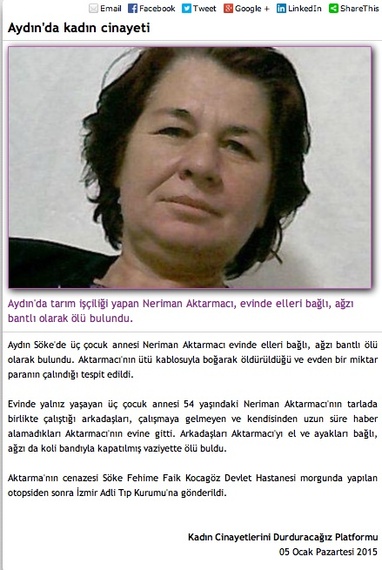 The protestors galvanized by Alsan's murder have been calling for the removal of family and social policies minister Aysenur Islam as well as tougher sentencing for perpetrators. In addition to these important steps, moving forward it will also be critical to have access to official data which provides an accurate account of the number of violent crimes committed against women. Without this type of data it is impossible to assess whether policy changes, steps taken by advocates, and so forth are working and if not, what more needs to be donee

Postscript: According to Hurriyetdailynews.com Aslan's murder has prompted many Turkish women to begin sharing their stories of sexual assault via social media using the hashtag #sendeanlat 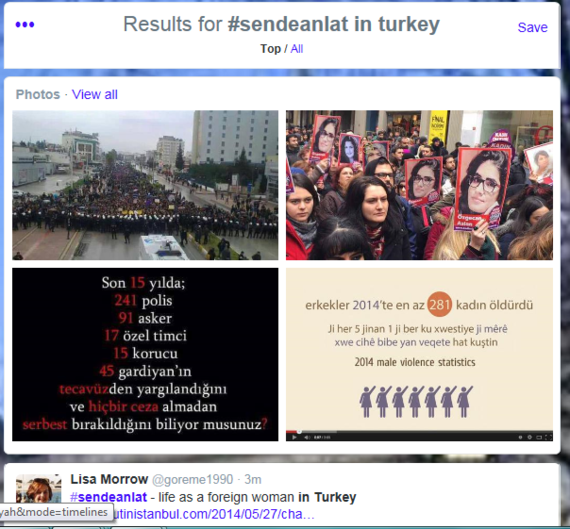