Giving up something -- making a change in our lives -- for Lent is tough. That's partly because change can be so painful. Here are some changes that have come my way, unbidden:

An oak tree in the canyon below our house split in half a year or two ago. Thirty feet of living, striving branches and twigs fell downhill.

A cherished rural landscape in faraway Michigan - near my father's 1912 birthplace - was transformed a few years ago by a stand of steely, towering wind turbines. Fifty-six 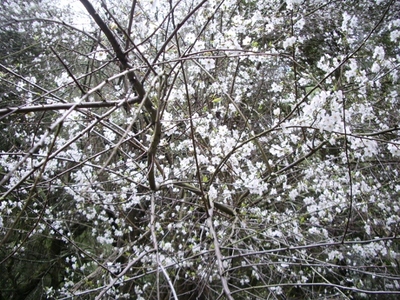 My Aunt Grace died three years ago. She just did. There was no stopping her.

But sometimes change has been a good thing: My son Peter got married and bought a house. He's a grown man now, expecting his first child any minute. I'm glad for him. But still, he's not my cute little kid anymore.

I'm trying to let go here. I'm trying to accept that everything changes. It just does. The Buddhists call it impermanence. Yes, the precious 2-year-old, 5-year-old, 13-year-old Peter is no more. Yes, that live oak is half the tree it used to be. Yes, the powers that be have had their way in Mason county, Michigan. All 56 turbines are rotating right now at the Lake Winds Energy Park, like it or not. It's not 1912 anymore; 1912 is gone forever. And no, I can't have my Aunt Grace back.

And so, I'm sitting here in my writing room trying to remind - convince - myself that indeed there's a good side to this impermanence thing. The logic, my Buddhist friends tell me, goes like this. If all things are impermanent, then we humans are impermanent as well. We don't have to stay stuck in the same-old-same-old. You can change your story. You really can. We have that choice.

Which is maybe what the Christian Lenten season is all about -- acknowledging loss and darkness in preparation for renewal and light. In fact, maybe one of the things we can give up for Lent this year is one of those old, outgrown stories of ours. Zen teacher and executive coach Marc Lesser makes this point in his book, "Know Yourself, Forget Yourself." He talks about impermanence this way:

Sometimes we get trapped by the stories we tell about ourselves, or by our interpretation of what past events mean. These stories create a ripple effect; if we believe them to be true, then we are influenced to live them out. But we don't have to do that. If it's true that we are afraid to speak in public, do we explain it by pointing to some humiliating event in childhood? Is that the story of our shyness? More to the point, do we use that story today to hold ourselves back? If so, then we need to work to rewrite this story. Nothing is set in stone.

Lesser goes on to say that he has nothing against stories. "We speak and think and feel in the language of stories." But he recommends letting go of the unhelpful stories we keep on telling ourselves. Utilize your stories, he says. Don't be pushed around by them. Jettison the ones that get in your way, especially the ones that say you have a fixed self that cannot be changed.

Lesser describes a married couple who sat down to do a little retirement planning. They gathered a wealth of data - spreadsheets and graphs - about their financial situation. As they studied it, the husband saw a future full of possibilities and opportunities, the wife saw only risks and pitfalls.

The couple concluded that, however things worked out for the two of them, the husband was going to be a rich and happy old man, the wife a poor and unhappy old woman. Husband and wife were living by differing stories, differing viewpoints, Lesser 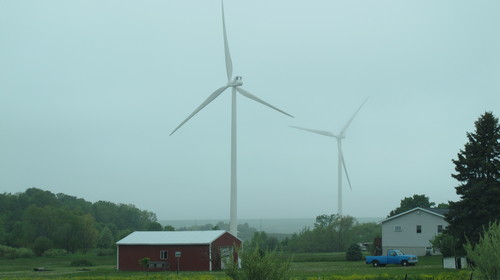 notes. That can create problems for any two people trying to get along, because "to even entertain the opposing viewpoint can seem to risk our own version of reality, our very self."

Sad to say, Lesser adds, most of us tend to be like the wife in the story. "We are much more inclined to perceive, feel, and cling to negative stories than to positive stories."

Which brings us back to impermanence. Yes, it's sad to lose that job, that friend. It's sad to see the Thanksgiving chrysanthemums fade and the needles fall off the Christmas tree. And that oak tree down in the canyon is a sorry sight indeed - a skinny shadow of itself.

But one afternoon, when I climbed down the canyon slope to take a closer look, I saw that, yes, the oak tree was greatly diminished. But the flowering fruit tree growing behind it was not. Three years earlier the flowering tree had been small and cramped and hidden by the more expansive oak. But on that afternoon the fruit tree was huge. Sprawling. It had burst into the sunny open space left behind by the oak tree. It had filled the sky with a delicate criss-crossing of branches, which were covered with buds, thousands and thousands of them, waiting to become blossoms, waiting to change.

Know Yourself, Forget Yourself: Five Truths to Transform Your Work, Relationships, and Everyday Life, by Marc Lesser, New World Library.

A version of this essay first appeared on BarbaraFalconerNewhall.com, where Barbara riffs on her rocky spiritual journey and life as an empty nest mom. Her interfaith book, Wrestling with God: Stories of Doubt and Faith, is available from Patheos Press.

Read more of Barbara's essays at "Breathing Lake Michigan" and "The Cataract Chronicles: I'll Be Seeing Me."