I'm not shy but I'm an introvert. I like other humans but I have a limited tolerance for "peopling" -- you know, cocktail parties, wedding receptions, any place where small talk is on the menu. If I have to attend an event where a "Hello, My Name Is" name tag is offered, anxiety will be my plus one. It might not be obvious because I've gotten pretty good at maneuvering through social situations -- maybe a good way to describe me is "sociable introvert."

Since the "peopling" doesn't exactly come naturally, it takes me a while to warm up to someone but once I do, I usually form strong friendships. And because I have to work at making friends, the friends I have are that much more important to me.

My husband and I decided to shift gears in our late-40s and adopt two boys. Our daughter was grown and flown. The house was quiet and neat. While we enjoyed our newfound freedom and time to connect as a couple (translation: sex with the door open), we decided peaceful wasn't our thing and set out to adopt two loud little boys.

Having young children at our age has brought chaos into our house -- the good kind, though. We knew adopting would be a game changer for us. I mean, of course we did. We knew our definition of "fully rested" would fly out the window. We knew that macaroni topped with cheese of a shade of orange not found in nature would often grace our dinner table because kids love that shit in the blue box, right? 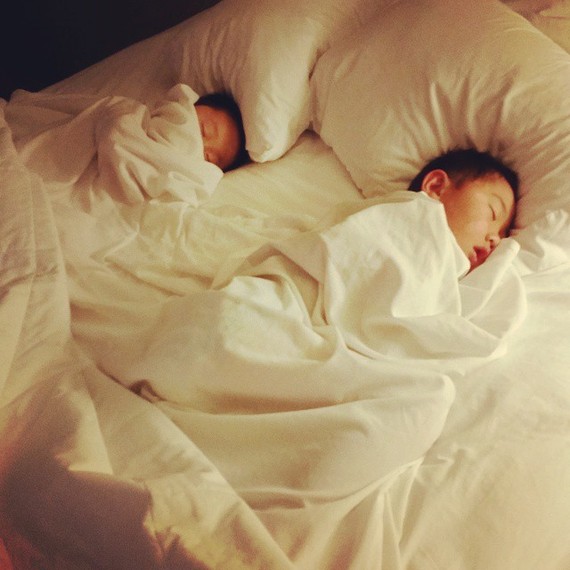 But, adoption changed my friendships. I didn't see that one coming.

Before we adopted our boys, most of my friends were married women in their 30s and 40s. Most were childfree or had older children. I had friends I could drink wine with until midnight or call for an impromptu coffee date. Most of these friends lived in houses stuffed with expensive bric-a-brac, the kind that screams "you break, you buy, kid!"

Finding good girlfriends is like dating. Common ground isn't enough. There has to be chemistry, that elusive "it factor" you can't really put your finger on. You'll wonder "is she feelin' me? Do I seem too eager?" Making friends with a woman is similar to having a new boyfriend except you're not obsessively shaving your legs or making sure you're wearing your good underwear. I considered myself lucky in the girlfriend department and then things changed post-adoption.

Sometimes change is good. Necessary. Friendships go through seasons of change as the people in them change. Bonds weaken, people drift apart or even leave our lives abruptly and purposefully. No matter how it happens, losing a friend is hard.

I was 25 when my daughter was born. My friendships with non-moms deteriorated. Not intentionally in an "I can't hang with you because I have a kid now" way. I actually made a deliberate effort not to blow off my childfree besties, but it happened in the end. Organically, I started gravitating toward other moms and the girls who partied until the wee hours and snoozed till noon gradually slipped from my life.

Once my daughter reached high school, I started developing friendships based on mutual interest instead of just having the whole mom thing in common but when we adopted our son, things changed rapidly. We had a pint-sized bundle of "I don't sleep for more than two hours at a time unless it's on top of you" and we were at an age where regular REM sleep mattered. A lot. I learned 40-something me does not bounce back after a sleepless night like 20-something me.

I missed my friends and my "grownup" life but any mention of a child-free night out brought on babysitter logistics planning that resembled a military battle movement. Once a well-read conversationalist, my interests had narrowed. If you wanted to talk about poop, snot, or Disney characters, I was your girl. Most of my friends had happily left the stage of life I was experiencing (again) far in the past or they'd chosen to skip it entirely.

Coming to parenthood through adoption in midlife brought about mixed reactions from friends. While some were genuinely happy for us, not many people understood the desire to hit the parenting reset button. We received some open criticism from those who thought we were doing our children a disservice for adding to our family when "our lives were half over." I know... isn't that cheerful?

Some of our friends were accepting of our decision to adopt but scolded us for choosing international adoption over an American child. People's willingness to express a strong opinion over a personal choice like parenthood was surprising and divisive.

People I considered my very closest friends have moved to the fringes of my life or disappeared entirely. I've learned to have a thicker skin, to fully own my life choices and to realize others have the right to disapprove of them... and move on.

I've learned to be much more tolerant of differences. I've become friends with other adoptive moms because we share that common bond, but often, there's not a lot of common ground besides adoption. I've connected with some people I'd never have met otherwise. Adoption adds a layer of complexity to family life and having friends who get that is important.

I'm 48 with kids in preschool. I'm always the oldest mom at the birthday party. Instead of turning up my nose at the young moms, I've gotten to know them as peers -- not in an "I'm older, wiser and know all the things" way. Having an open mind toward letting those friendships bloom has been good for me.

Friendships are like tree branches. Some are ever sturdy. Some are snapped in two by an unexpected storm. Branches can crack from weakness or holding the weight of something that's become too heavy over time. Sometimes, we have to intentionally prune branches and make room for new growth.

Adoption led to a season of pruning for me, which was painful because it was unexpected. I feel loss, relief and everything in between. I am at the place in my life where I have a pretty good idea of who I am and what matters to me.

I'm taking a deep breath and moving forward in the next chapter with all of the people I'm lucky to have in my life. I think the best is still mine to experience.

More:
international adoptionKidsParenting ParentsAdoption
Newsletter Sign Up
Raise the kind of person you'd like to know
Subscribe to our parenting newsletter.
Successfully Subscribed!
Realness delivered to your inbox