Compared with the great centers of learning in Europe, with their centuries of academic traditions, this is still a very young university. Yet, there is something unique about its origin, worth recalling on this festive occasion.

The Hebrew University was not established by a ruling monarch or by the government of an existing state. It was conceived and founded by the Zionist movement, which pursued the goal of establishing a Jewish homeland.

This was an association of political parties with diverse agendas and ideologies. Thus, debates about the university-to-be and the specific planning process were marked by political controversies. The main disagreement was about the nature of the university during the fostering years of its existence.

One opinion advocated that the university should first establish itself as a first-rate research institution with solid international recognition and should only later open its gates to masses of students and grant academic degrees.

According to this proposal, the university would open as a collection of scientific research centers, which would gradually be expanded and ultimately evolve into an academic institution combining research and teaching.

The other view was to immediately admit a large number of students, which might affect the ability to have optimal class sizes with the best academic staff, teaching and research facilities.

This position was motivated by the increasing restrictions on the admission of Jewish students occurring at the same time at universities across Europe.

The president of the Zionist organization, Chaim Weizmann, a scientist himself who later became the first president of the State of Israel, strongly supported the former option. Albert Einstein, who joined the Zionist movement in 1919 and became actively involved in the initiative to establish a Hebrew-language university in Jerusalem, supported Weizmann on this issue.

The Hebrew University has been fortunate that their position prevailed. Had it been the other way around, the University could not have played such an effective role in helping the pre-state Jewish community, and later the infant State of Israel, in coping with medical, agricultural, technological and security challenges, and could not have contributed so significantly to the economic growth of the state.

On April 1, 1925, thousands of people gathered on the eastern slope of Mount Scopus, facing a panoramic view of the Judean desert, to attend the official opening of the Hebrew University. This ceremony marked the achievement of an important academic goal and milestone for the Jewish people. The university was founded as an international organization, with many of the best minds of the early parts of the 20th century among them, including Otto Warburg, Sigmund Freud, Martin Buber, Paul Ehrlich, Weizmann and Einstein, who served as chairman of the academic committee of the Board of Governors of the university. 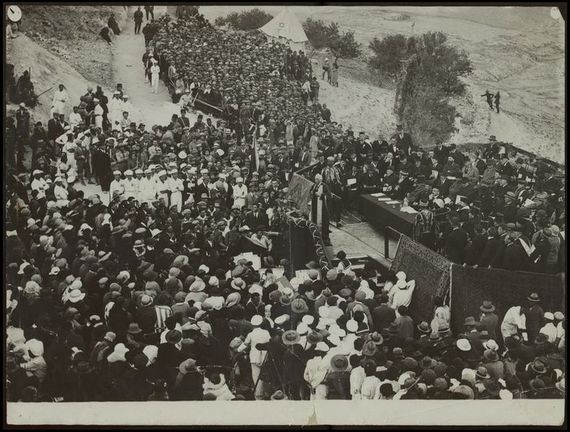 They were intimately involved in developing the concept, raising funds and gaining support for the institution in its formative years. An advisory committee, led by prominent scientists and scholars, established the first research centers in Jerusalem in the fields of microbiology, chemistry and in Jewish Studies.

The commitment of such distinguished figures helped secure the success of a center of research with international standards, located in a small and poor community struggling for its existence. This concept of a university became a model for future institutions of higher learning in Israel and central to the development of Israel's scientific and scholarly infrastructure, which has become world renowned.

On the occasion of the opening of the university, Albert Einstein published a manifesto "The Mission of our University", which generated interest and excitement in the entire Jewish and academic worlds.

It states: "The opening of our Hebrew University on Mount Scopus, at Jerusalem, is an event which should not only fill us with just pride, but should also inspire us to serious reflection. ... A University is a place where the universality of human spirit manifests itself. Science and investigation recognize as their aim the truth only."

Einstein concludes with the vision that, "... our University will develop speedily into a great spiritual center which will evoke the respect of cultural mankind the world over."

It is thanks to this heroic vision of the founders of the Hebrew University that when the State of Israel was established in 1948 -- 23 years after the establishment of the university -- it already had important elements of scientific and technological infrastructure with a mix of applied and basic research facilities.

The Hebrew University and the two other academic institutions, the Technion and the Weizmann Institute of Science, which were then in existence, conducted research and were able to train scientists and engineers as well as educate students at all levels.

The International Board of Governors of The Hebrew University met this year and reminisced on the long path of development, progress and achievements since the modest but ambitious beginnings in 1925 until today.

Since Albert Einstein played such an important role in the early years of the university, the centennial of his general theory of relativity, which the world also marks this year, was also observed and celebrated along with the university's 90th birthday.

To demonstrate the university's prominence among the world's top institutions, its vice president for research, Prof. Shy Arkin, at a special session presented a sample of significant research projects: research on cosmological explosions producing massive gamma-ray bursts and their impact on possible evolution of life; on the malaria parasite's evasion of the immune response; on strategies employed by bees in effective selection between different diet options; on effective strategies of auction managers.

The scope of ideas, methods and results presented was impressive and inspiring.

While we celebrate the past, we also reflect on the present and the future. The Hebrew University was founded by the dreams of the Zionist movement, and by personal entrepreneurship.

It has evolved into something quite remarkable. Today, it is an academic institution that we can say, with much confidence and satisfaction, has more than fulfilled the vision of its founders.

Former president of the Hebrew University of Jerusalem and academic director of the Albert Einstein Archives.