There's a heated debate going on right now among cinéastes about the proper way to see Gravity. Some say that the very best way to experience Alfonso Cuarón's incredibly intense space epic is by catching the 3D version. While still others insist that -- in order to feel the full effect of (SPOILERS AHEAD) being stranded 375 miles above Earth -- you really need to see the IMAX 3D version of this movie.

Well, according to sound editor Skip Lievsay, if you want to have the ultimate Gravity experience and see this film in all its claustrophobic glory, then you really need to seek out a cinema that has a Dolby Atmos sound system. That way, you can see and hear this movie as Cuarón actually wanted audiences to experience it.

"Alfonso spent four and a half years researching and developing Gravity. He wanted this movie to be as authentic as possible when it came to recreating the terror that an astronaut would experience were they suddenly to become untethered and then go hurtling through space," explained Skip during a recent phone interview. "But the problem with going with ultra-realism when your movie is set in space is that sound doesn't actually travel in a vacuum. So you're now extremely limited when it comes to what elements you can build your film's soundscape around."

Luckily, Cuarón had recruited Glenn Fremantle, one of Britain's top sound designers, to come work with him on Gravity. And while Alfonso was at London's Pinewood and Shepperton Studios shooting Sandra Bullock and George Clooney in front of green screens, Glenn then came up with an extremely clever conceit when it came to creating audio elements that would actually sound as though they'd been recorded out in the depths of space.

"Glenn established the idea that -- since an astronaut has air in his or her space suit -- that if they were to touch something, the vibrations inside of their suit would then allow this astronaut to hear things, that the sound could then travel to their ears through touch," Lievsay continued. "This is why a lot of the audio for Gravity wound up being recorded through a transducer, which is this microphone that records vibrations." 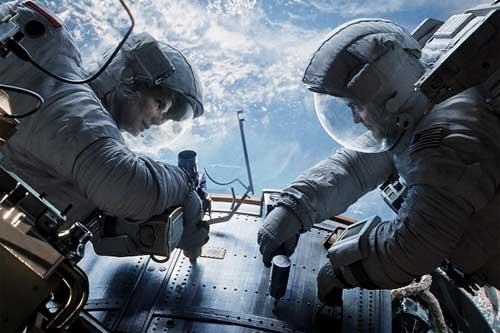 Using this recording technique to collect a lot of Gravity's audio elements gave this movie's soundscape a very unique quality. A muted sound that then made its characters seem that much more vulnerable and isolated as they floated out there in space.

"And then you have to talk about how Alfonso and Glenn handled all of the transmissions from NASA to the space station or the shuttle and then the transmission between astronauts so that they all sounded like separate devices. That it was then easy for the audience to understand who was talking to who while still preserving the emotion and drama in each scene," Skip stated. "This became a real challenge for Gravity's sound design team. To try and maximize the fullness of Sandra and George's voice while still making these recordings sound like authentic radio transmissions. Because -- as it turns out -- a certain amount of emotion is lost, the edge that a human voice can have gets taken away the more that we try and make a recording sounds like it's coming in over the radio. That kind of filtered effect can really undercut into the energy, emotion, and drama that one gets from listening to a human voice."

But once shooting was complete and Cuarón and Fremantle had collected all of the elements that they thought were necessary to build an appropriate soundscape for Gravity, it was then time to head on over to Warner Bros. Which is where Alfonso and Skip then began to remix these elements on that movie studio's new Dolby Atmos stage.

"Ever since Dolby Laboratories first made Atmos available in the Spring of last year for filmmakers to use during their final sound mixes, Alfonso has been very eager to experiment with this new technology," Lievsay said. "Given that this new theatrical sound system enables the placement of sound overhead, you can now make it seem as though a character were floating directly over the audience's heads. Which fit in perfectly with the sort of story that Alfonso was trying to tell with Gravity."

So for a week, Alfonso and Skip took the elements that Glenn and his team had created in the UK. And they then experimented with repanning and repositioning this audio to create a deeper and richer soundscape for Gravity. And the end result was a motion picture that was so much more exciting, so much more gratifying. 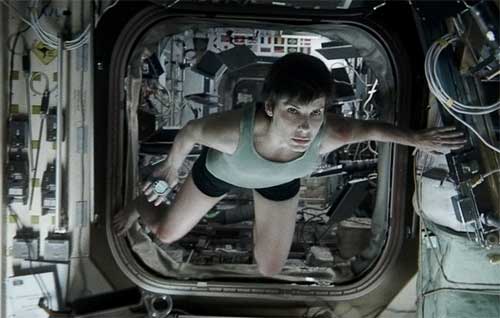 "Honestly, if you listened to the original mix that Alfonso and Glen put together for this movie and then compared it to our Atmos remix, it's like going mono to stereo. The obvious jump in quality that you got when movies went from VHS to DVD. Or from DVD to Blu-ray," Lievsay enthused. "This movie sounds so much better -- more importantly, it plays so much better -- when you see it screened in a theatre that has a Atmos sound system."

Mind you, the real irony of this whole situation is that -- based on the $55.6 million that Gravity earned over this past weekend (which gave this Alfonso Cuarón the biggest October opening in Hollywood history) -- a lot of Hollywood helmers are now supposedly going out their ways to find theaters that are showing this intense space epic which are also equipped with Dolby Atmos. So that these directors can then decide if they too should be making use of this dramatic sound system when it comes time to do the final mix on their next motion picture.

"So in a weird sort of way, the production of Gravity turned out to be a mutually beneficial thing for both Alfonso and Dolby. Given that the dramatic sound that you can get out of Atmos seems to work really, really well with Gravity while -- at the same time -- Gravity wound up being this tremendous showcase for what filmmakers can do, how they can heighten the drama and excitement of their movies if they do their final sound mix using the Dolby Atmos system," Skip concluded.

Which is all the more bizarre. Given that one of the things Gravity hammers home over and over again is how scary silence can be.