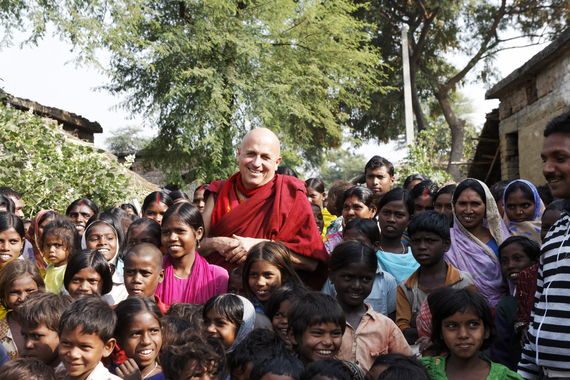 We devote hours upon hours to developing skills to excel at tasks that are important to us - from sports and music to public speaking and project management. Renowned Buddhist monk Matthieu Ricard believes we similarly should cultivate our ability to care and show compassion - not only in our personal lives, but professionally, too. This can help us transform the environmental movement and society at large, ultimately making the world a better place.

Matthieu is no stranger to science - he was born in France, where he earned a Ph.D. in cell genetics. He has spent nearly half a century living in the Himalayas. There, he founded Karuna-Shechen, a nonprofit that works to provide health care, education and social services to underserved populations in the region.

Matthieu is also an author, photographer and translator, including serving as the French interpreter for the Dalai Lama for more than 25 years. He has written more than half a dozen books, which have been translated into 20 languages.

He recently shared with me his thoughts about how environmentalists and others can change the world through altruism.

Tercek: I love your new book, "Altruism," and how it dares people to be altruistic to make the world a better place. What is your definition of "altruism"?

Ricard: Altruism is a benevolent state of mind. To be altruistic is to be concerned about the fate of all those around us and to wish them well. This should be done together with the determination to act for their benefit. Valuing others is the main state of mind that leads to altruism.

When altruism is our dominant state of mind - our default mode - it expresses itself as benevolence toward anyone who might come into the field of our attention and translates itself as goodwill, readiness and willingness to care. When we perceive that others have a pressing need, we develop empathic concern. When the need is related to a yearning for happiness, altruism will foster the realization of that aspiration. When the need is related to suffering, compassion will induce us to remedy the suffering and its causes.

We should, of course, do everything possible to put altruism and compassion into action. However, we should not restrict the use of the term "altruism" to external behavior since actions themselves do not allow us to know with certainty the motivation that inspired them. A hindrance to taking action - which is beyond the control of the person who wants to act - does not at diminish the altruistic nature of his motivation.

Tercek: Of course I especially like the emphasis the book places on environmental challenges and how altruism can support strong conservation progress. What advice do you have for environmentalists about how to be more altruistic in our work?

Ricard: The question of the environment is complex scientifically, economically and politically. But in the end, it is a matter of altruism versus selfishness. If we don't care for the fate of future generations and of the millions of other species who are our co-citizens in this world, we will not see that there is an environmental problem!

Some might think it does not matter because they will not be here in 100 years. Groucho Marx famously said, "Why should I care for future generations? What did they do for me?" Unfortunately, quite a few people say that today in a serious manner.

So, my humble advice to environmentalists would be to demonstrate and explain that altruism is the only concept that can reconcile the needs of the economy in the short term, quality of life in the midterm and the environment in the long term.

Let's assume that the majority of us are basically good people who are willing to build a better world. In that case, we can do so together thanks to altruism. If we have more consideration for others, we will promote a more caring economy, and we will promote harmony in society and remedy inequalities. We will do all that is needed not to transgress the planetary boundaries within which humanity and the rest of the biosphere can continue to prosper.

We need to showcase the fact that we are all in the same boat - fundamentally interdependent - and that we need to enhance our level of cooperation and solidarity.

Tercek: One of the challenges we environmentalists face is that there are some businesses, governments and individuals who engage in activities that are very harmful to the environment. How do you suggest we engage with such players in an altruistic manner?

Ricard: If we believe in the emergence of a more altruistic society, we should not be discouraged when faced with various manifestations of selfishness. When cynical interest groups make their own profit an absolute priority, ignoring the harmful consequences of their activities on the population and the whole biosphere, it is legitimate to speak of institutionalized selfishness.

The best way is to act together to bring about a change of culture. Fortunately, cultures change faster than genes. Today, no one would dare to say publicly: "Slavery was not so bad after all," or, "Why don't we reverse the decision to grant voting rights to women?" There is a point when you realize that you cannot support certain types of behavior anymore.

We should help people realize that they are human beings who are wired to care for each other and that they could - and should - bring their humanity into their professional activities. It is possible to show them that this is a win-win situation. 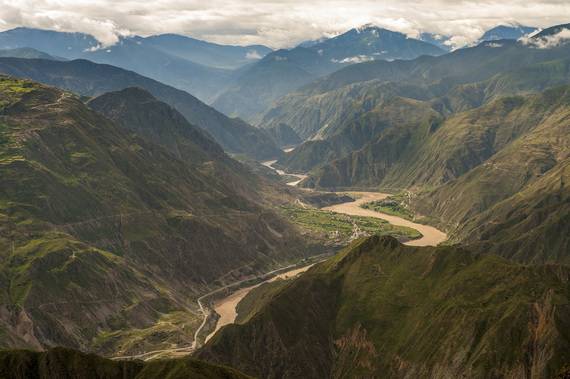 Matthiew Ricard, who has lived in the Himalayas for half a century, believes altruism can lead people to care for the environment. © Amy Vitale
Tercek: I admire the emphasis on no-nonsense science in your book. You state that the science is clear - we can train our minds to be kinder and more compassionate. Please say more.

Ricard: There has long been an assumption in psychology, economics and evolution that man is essentially selfish. But during the last 30 years, new scientific insights have shown that genuine altruism does exist and can be extended beyond our kin to our fellow human beings and other species.

Collaboration between neuroscientists and contemplatives has shown that altruism and compassion are skills that can be cultivated with training. Research has shown without ambiguity that training in altruism and compassion brings about functional and structural changes in your brain and can even change the expression of your genes. These studies have also allowed distinguishing the differences between empathy (the faculty to resonate with others' feelings), altruism (the wish that others may be happy) and compassion (the wish that they might be free from suffering).

Even if competition is generally more visible and more spectacular than cooperation, recent work has shown that evolution must involve cooperation in order to create higher levels of organization. It seems that today we need to move to the next level of cooperation to face the many challenges of our times.

Tercek: I believe environmentalists can accomplish more by fighting and arguing less and by putting more emphasis on finding common ground and pursuing collaboration and cooperation - even with some of the parties considered the "bad guys." But critics think this is naive. What do you think?

Ricard: It is much better to win over people by bringing the best of themselves to the surface. This usually can be achieved by meeting them in person whenever possible. Remember what Nelson Mandela said, reflecting on what kind of an attitude can serve an environmental or political cause:

"I always knew that deep down in every human heart there is mercy and generosity. ... People must learn to hate, and if they can learn to hate, they can be taught to love, for love comes more naturally to the human heart than its opposite. ... Goodness is a flame that can be hidden but never extinguished."

These are not the words of a daydreaming utopian but of someone who overcame the institutionalized selfishness of people who at first sight did not seem inclined to practice care and compassion. 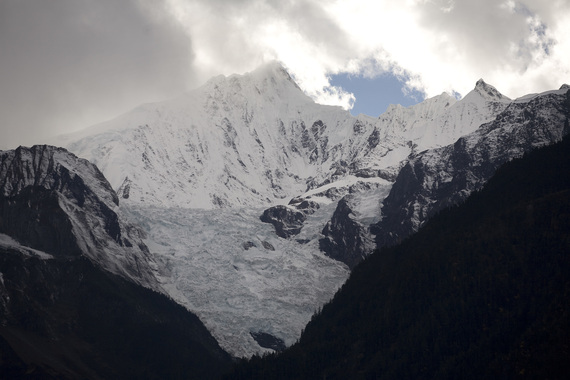 Matthieu Ricard, who lives in the Himalayas, says care and compassion are important for protecting nature for future generations. ©Scott Warren
Tercek: How do we best scale up and accelerate our efforts to protect nature? Do you think the mind-training practices you champion can become widespread enough to really change the world?

Ricard: Yes, bringing to their optimal level our capacities to care for others, including other species and future generations, is something that anyone can do. It always surprises me that no one questions the need for devoting time and effort to learning how to read and write, playing a musical instrument, training in any sport or acquiring professional skills. Why then should we assume that basic human qualities such as benevolence, attention and emotional balance would be fully developed right from the beginning without us having to do anything about it?

So the point is not necessarily to propagate meditation as such but to make people realize that whatever they do in life, they would benefit immensely from fully developing their most constructive and wholesome human qualities.

Then, once the number of people who have cultivated these altruistic and cooperative skills has reached a critical mass, there can be a tipping point in the dominant culture. The interaction between individual change and societal change is at the heart of the evolution of culture.

Tercek: How should we engage with good people who are uncomfortable with meditation and other spiritual practices?

Ricard: It is not necessary to use words like meditation and spirituality, which might put off a number of people who could benefit from such practices. It is more suitable and accurate to speak of mind training and of cultivating basic human qualities. This can be done with the help of a spiritual path, but it can also be done in a secular way. Who could be against increasing our compassion and our caring mindfulness?

Tercek: Your book makes it obvious that you have a deep and heartfelt love of nature. What are some of your favorite places to experience the great outdoors and the wonders of nature?

Ricard: That is right. I don't feel very comfortable in cities and I prefer to discover an amazing landscape than to visit some old monument. I have live in the Himalayas for almost half a century, and they offer plenty of wonders in Bhutan, where I lived for eight years, Tibet and Nepal, where I live now. I was also very taken by the raw, savage beauty of Iceland, which I visited last year.

Tercek: You always seem to be happy, in a good mood and ready to enjoy a laugh. What's your secret?

Ricard: No secret. It's very simple: altruism and compassion. I have a long way to go to bring them to their optimal level, but I sincerely try to become a better human being day after day, year after year. This gives me joy and a sense of fulfillment. My motto might be, "Transform yourself to transform the world or to better serve others."

Mark Tercek is the president and CEO of the Nature Conservancy and author of Nature's Fortune: How Business and Society Thrive by Investing in Nature. Follow Mark on Twitter @MarkTercek .