My dad is dying.

I am not sure what I am supposed to do with that information. The truth is that we are supposed to think or feel or act or do something based on how we were raised or on our religious upbringing. But I've been feeling like I have been thinking and feeling and acting and doing all the wrong things.

Today is my dad's 67th birthday. And while he has lived a very full life, nobody is ready to say goodbye to him just yet.

When your father is dying, you're not sure what you're supposed to think. Are you supposed to focus on what he's going through right now in this moment, which is pain and ambiguity and frustration and weakness? Are you supposed to focus on your dad in his prime, y'know, when he was a steel working badass by day and Harley-Davidson motorcycle riding badass by night? Do you focus on your favorite memories together? Like how he he actually came to your Girl Scout outing when you were 6 to plant a tree in the park on father/daughter day and how every time you visited him, you would take a drive together to see that tree in Lakeview Park? Or do you think about the lessons that he tried to teach you? About how honesty is more important than anything, greed is the worst quality of the human can have, that you should never let the gas tank in your car dip below a quarter of a tank, to do your best because that's all anyone can ask of you, and to always remember the 11th Commandment: Thou shall not press thy luck?

When he refuses to go to the hospital, are you supposed to treat them like a child making him do so or allow him to make his own decisions in support no matter what? When he's taking 19 pills for all sorts of medical necessities and he asks for some Pepto-Bismol, do you give it to him? When he snaps at you because is exhausted and uncomfortable and frustrated and sick, do you take it or dish it right back at him like you would if he was well?

Is it okay to write a blog post about your dad dying that is nothing but a bunch of questions that you just need to get it out of your head?

I wrote everything above a couple weeks ago and put it aside.

I still have nothing but these kinds of questions swirling in my brain. Am I feeling like I'm supposed to feel? Am I mourning him correctly? Should I work and press on or take a day to sit alone with my thoughts? If I do the latter, how will I spend the time? Should I listen to The Who's Tommy (dad's favorite album) or rewatch all 10 episodes of Band of Brothers (Dad's favorite program)? Or should I just take another nap on my tear-soaked pillow?

After my third nap of the day, I reflected a bit on my dad's life. He outlived his previous generation's lifespan but still died far too young. He started working at the steel mill in Lorain, Ohio in January 1968, had about two years of military service as an MP in the Vietnam War, and then returned home and worked back at the mill until January 2014 when he retired. In between, he was married twice, had two daughters, a son, and three grandchildren. 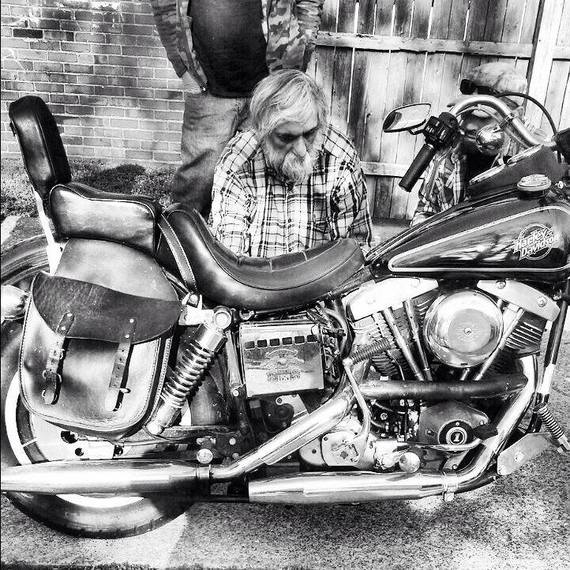 He was wicked smart, but also a very simple man. He liked routine -- reading his paper, drinking milk with dinner, mowing the lawn without fail, and watching the news and the History Channel religiously. He never touched a computer as he had no need for technology, but that didn't stop him from asking his kids to research random stuff about Vietnam and family trees and other things on his behalf. He loved his Harley, but hated to travel. He was generous and loving, but when he said "I can't make any promises," you knew it was his way of saying "not gonna happen." He was loving and stubborn and honest and funny. Seriously funny. He called me Cha-Choo (something I apparently called myself once when I was little that just kind of stuck) and my sister Shyster (a nickname she earned by consistently testing the 11th commandment).

I inherited many of his interests. On our long Sunday phone conversations, we'd talk about day-to-day stuff, presidential politics (oh, how he hated the Republican establishment), American history (mostly WWII), and then he'd share some of his stories. Dad was a gifted storyteller. He told shocking war stories, remembrances of his life growing up, funny experiences at the steel mill, and often repeat the story of me and my obsession with my jack-in-the-box as a wee one. Our conversations were peppered with bad one-liner dad jokes in between his different tales that always made me crack up. Oh, I could listen to him for hours on end. And I did. Often.

I can no longer call him. That's just sinking in now.

Why on earth am I writing this stupid blog post? Blog posts are supposed to have a point. This has no point.

I guess I'm writing this because I need it to exist. I'm sharing it because it feels right to share it. I suppose that's enough. Thanks for listening.

More:
fathers and daughtersmourningDeathStorytellingGPS For The Soul
Newsletter Sign Up
An essential daily guide to achieving the good life
Subscribe to our lifestyle email.
Successfully Subscribed!
Realness delivered to your inbox