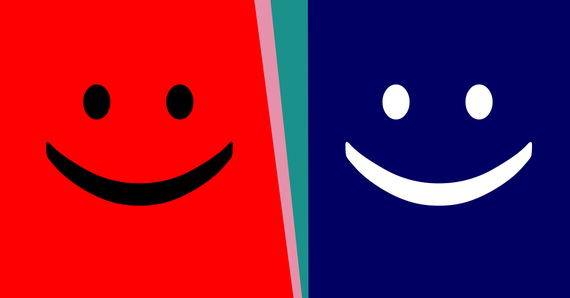 American and Chinese cultures are often seen as falling on the opposite ends of this spectrum. U.S. has gunslingers and cowboys, individual class mobility, i.e. the American dream, and Thoreau, who sat by a pond alone for two years. The Chinese have Confucian values, filial piety, guanxi ("relationships/networks"), and Yue Fei, the folk hero who tattooed "Serve the Country with Utmost Loyalty" on his back.

Two psychologists, Luo Lu and Robin Gilmour, asked 142 Taiwanese students and 97 Caucasian American students this exact same thing. (Note the specific samples: The study didn't include mainland Chinese or non-white Americans, so take the findings with a pinch of salt.)

Surprising (or not), in general, the themes that emerged out of the two groups were broadly similar. For example, in both groups, students described happiness as "mental states of satisfaction and contention," as "positive feelings/emotions," as "achievement," as "freedom from ill-being," and as "relating to people."

However, there were several points of difference between the Chinese students and Caucasian American students. Here is the full list:

While the Chinese students characterized happiness as a "harmonious homeostasis" (i.e., equilibrium or balance) within the self, as well as between the self and his environment; few American students referred to balance or harmony in their descriptions.

On the other hand, the Chinese students listed communal definitions of happiness focused on shaping the self, such as self-cultivation, mind-work and positive evaluations of the self by others.

One unique theme found in the Caucasian American students' responses was happiness as the "ultimate value in life." Such strong emphasis placed on happiness was not found amongst Chinese students, indicating that this may stem from an individualistic outlook, in contrast to a collectivistic outlook.

Other empirical work supports this, finding that Chinese students placed less emphasis on happiness, and worried less than American students about whether they were satisfied with life.

As mentioned, researchers found broadly similar themes between Chinese and American students. Nonetheless, the details within these themes contained subtle differences. One important distinction is while both groups emphasized positive emotions, Chinese students focus on intense emotions much less than Caucasian American students.

6) Both believe happiness was up to yourself, but definitions of "autonomy" differ.

While both groups believed we have personal responsibility for our happiness, they had differing definitions of self-autonomy. For Americans, autonomy is ideally complete personal freedom to fulfill your potential and become your authentic self. For the Chinese, personal actions and choices must be governed by morality, and a meaningful life is a virtuous life. The Chinese students also believed that while a person should be autonomous, she must eventually accept what fate brings.

This article is part of an article-series about the Science Behind Well-being. For more, visit David's website, Living Meanings.

David is a Research Editor at the Huffington Post.