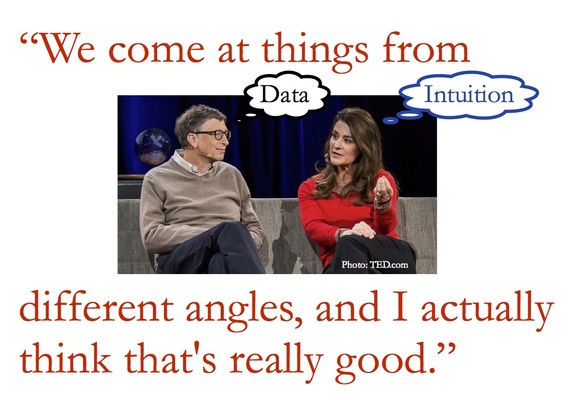 The couple would marry soon.

Melinda says they had already decided "that the wealth that had come from Microsoft would be given back to society. But it was really on that walk that we started to talk about what might we do and how might we go about it."

When a couple decides to give together, altruism often dominates their thoughts. But issues of power and control will guide the actual giving. With any pair of partners -- even Bill and Melinda Gates -- it's important to ask: how will decisions be made?

In a TED interview with Chris Anderson (March, 2014), the Gates talked about their joint philanthropy. Bill remembers 1993 this way:

We were excited that there would be a stage in our life when we'd get to work together and figure out how to give this money back... There was a lot we didn't know. Our naiveté was pretty incredible when we look back on it. But we had a certain enthusiasm that... the post-Microsoft phase would be our philanthropic partnership.

Philanthropists who decide to give as a couple usually benefit from answering key questions:

A giving strategy that's truly appropriate for a philanthropic couple must reflect the process that suits them as well as the goals they want to achieve. And though each individual in a couple usually takes on some responsibilities independently, the overall approach to giving remains a team effort.

Melinda and Bill launched their foundation in 1997, focusing on education and global health inequities. Melinda ran the foundation until Bill joined in 2006.

Was it hard to power-share?

The short answer: no. Their "team effort" depended -- and still depends -- on shared vision, shared responsibilities and communication.

"We enjoy it," says Melinda.

We don't travel together as much for the foundation, actually, as we used to when Bill was working at Microsoft... But I always know when I come home, Bill's going to be interested in what I learned, whether it's about women or girls or something new about the vaccine delivery chain, or this person that is a great leader. He's going to listen and be really interested. And he knows when he comes home, even if it's to talk about the speech he did or the data or what he's learned, I'm really interested.

Bill compares the philanthropy to his business pairings:

Because we built this thing together from the beginning, it's this great partnership. I had that with Paul Allen in the early days of Microsoft. I had it with Steve Ballmer as Microsoft got bigger, and now Melinda, and in even stronger, equal ways, is the partner, so we talk a lot about which things should we give more to, which groups are working well. She's got a lot of insight. She'll sit down with the employees a lot. We'll take the different trips she described. So there's a lot of collaboration.

It also helped that they were raised with a philosophy of giving back. In their Giving Pledge letter, they make the influence clear:

Both of us were fortunate to grow up with parents who taught us some tremendously important values. Work hard. Show respect. Have a sense of humor. And if life happens to bless you with talent or treasure, you have a responsibility to use those gifts as well and as wisely as you possibly can. Now we hope to pass this example on to our own children.

As in any partnership, engagement is driven by personal and emotional involvement. When spouses or partners share decision-making or discuss and agree on how to divide these responsibilities, their mutual engagement in philanthropy often deepens.

"We come at things from different angles," says Melinda.

I actually think that's really good. So Bill can look at the big data and say,"I want to act based on these global statistics." For me, I come at it from intuition. I meet with lots of people on the ground and Bill's taught me to take that and read up to the global data and see if they match, and I think what I've taught him is to take that data and meet with people on the ground to understand, can you actually deliver that vaccine? Can you get a woman to accept those polio drops in her child's mouth? Because the delivery piece is every bit as important as the science. So I think it's been more a coming-to over time towards each other's point of view, and quite frankly, the work is better because of it.

Bill puts it simply and emphatically:

It's the most fulfilling thing we've ever done.

FOR MORE: Giving as a Couple (Rockefeller Philanthropy Advisors); Gates Interview on TED