I told you about how I worked as a high-end dog walker for a hot minute, right? And I told you about the poopy ordeals of a certain little Poodle named Charles and his helicopter owner, her frantic arms hovering over his head as she screeched and hollered and hustled him off to the vet uneccessarily?

The diversity of dogs you meet in this line of work surpasses the differences I've encountered among humans. It teaches you a lot about patience and compassion. Whether a dog's quirks are the result of an owner's neurosis or simply a personality trait of the canine, you can't say, "Now, Miss Smith, the dog really does not need another vet visit, this is normal behavior." Nor can you say, "Now, listen, dogfriend, your aggression toward the mail carrier is really unbecoming." All you can do is sigh and acquiesce, or cross the street to avoid the mail truck and its driver. Nor can you complain about poop. Dog walking is part of the eightfold path to Nirvana.

One very old dog I walked was named Fritz. He was some sort of speckled Labrador mix. He was about 18 -- which, in dog terms, is ancient. He was also blind, deaf, and feeble. No longer the dog of his youth, he was relegated to the downstairs part of the house with a baby gate.

But he didn't seem to know his age. 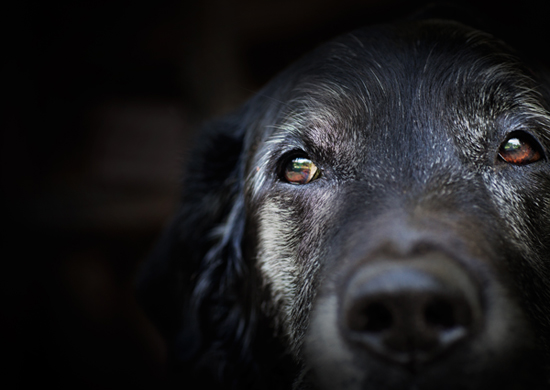 Somehow, without hearing or sight, he knew when I was coming, depending on some sort of mystical extra dog sense. As I opened the door, Fritz would stand at the gate, ears perked, tap dancing on his paws, and howl with pleasure or with his favorite toy in his mouth. I'd harness and leash him, scratching his head and feeding him his favorite treats -- Beggin' Strips (dogs don't know they're not bacon). The supermarket grade snacks surprised me, as well as the bag of Kibbles 'n' Bits from which Fritz ate. In San Francisco you can get raw pet food delivered daily to your front door, yet somehow, Fritz had made it to 126 in dog years eating the human equivalent of McDonald's. This is not an endorsement of either.

Out of the house, Fritz would eagerly tug at his leash -- not a lot, but excitedly. His walks were short because even a stroll down the block could take him out, but he was just as enthusiastic about all the smells of the world as if he were a newborn puppy. I loved him for it.

And I loved him even when I had to give him an impromptu bath... after he fell in his own poop.

He pooped like clockwork on our walks. It was sort of amazing. Every day -- without fail -- we'd cross the street and he'd pop a squat and squeeze out a healthy poop. It was always easy to scoop. Fritz's consistency -- both in his timing and his deposits -- was immaculate. Something that perhaps comes only with old age, or crappy dog food, or... I don't know what. When you're a dog-walker, you think a lot about poop.

So it was alarming the day he squatted, and under the strain of his efforts, his hind legs gave way, and he plopped down in his poop. Yes. He fell down in his own poop. And yes, I was the one to clean it up.

And Fritz, slowly collecting his legs beneath him and shaking out his fur, was all like, "Of course I'm all right. What's that smell?" (This was in my imagination, of course.)

"Fritz!" I said, "You totally fell down in poo! Are your legs okay? Let's get you home."

"Home?" said Fritz, "But I think a raccoon crossed the street down at the end of the block and I want to go find him."

"Nonsense, my girl! You should have seen me just the other day, chasing a possum across the yard!"

"Fritz, you haven't been allowed in the yard for years."

At which point Fritz became sullen.

"Come to think of it, my legs don't work as well as they used to these days."

"Come on, let's get you home and clean you up."

There was a sink in the garage to facilitate the process. I scrubbed his hindquarters clean. Never in a million years did I think I'd be scrubbing poop off of someone else's dog, and yet there I was, on my knees without a second thought, towel drying a very old dog. Once dry, I couldn't resist clasping my arms around his neck in a hug. I gave him some more treats. I dug his favorite toy out of his box for him. I shut the baby gate and left after refreshing his water bowl.

The next time I saw Fritz, he was not waiting for me at the gate. A panicked search found him lying in his bed. I roused him for a walk but could tell his legs were stiff and sore. The puppy energy was gone. His walk was barely that -- just a quick back and forth so he could relieve himself. I didn't want to have to carry him home. Or worse -- have to call the emergency vet.

No, I wouldn't have to be the one to do that. The client called to tell me Fritz would no longer need walks. Fritz was gone.

He wasn't my dog, but my heart broke anyway. 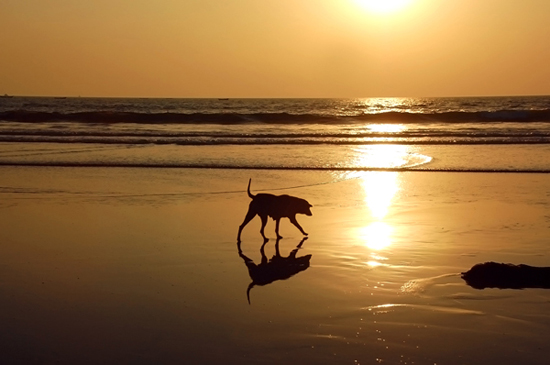 Photos: An old Labrador face and a dog at sunset by Shutterstock

Named by beatnik parents and raised by drag queens in New York, Roxy Dada has a soft spot in her heart for creatures big and small. With a nomadic spirit, she has wandered the globe, finally settling in San Francisco, where she sits in coffee shops telling stories too wild to be fictional. She has a twin sister who -- for reasons beyond word count limits -- cannot be named.