You take a guy -- a white guy, an Irish guy, born in Seattle, a longtime Upper East Sider, a Trump voter, no less. You stick him in an apartment north of 125th St. And less than a year later he's going around unironically calling himself the Mayor of Harlem. Sounds like all you need to complete the recipe is an industrial-sized can of whup-ass courtesy of longtime residents, right? Well, you may be underestimating Harlem and the folks who live there. And you're sure as hell underestimating James Monahan, the publicist whose quest for world domination starts with the hottest new spots on Frederick Douglass Boulevard's Restaurant Row.

Our story begins in an intensive care unit in Houston. Well, sort of. To give you a little background first, Monahan moved to New York in 2003 and worked as a publicist for Deussen Global Communications before striking out on his own with Monahan PR, which represented clients including Bar & Books on the Upper East Side, Heering liqueurs, and celeb chef David Rosengarten. I met him several years ago; back then he was a booze-cigars-and-women kind of guy who did all of the above to excess, a kind of Sky Masterson-Fat Elvis hybrid. I never tried to match him drink for drink, for which my liver is grateful.

Starting in February, 2015, having one too many drinks led to having one too many bottles; according to Monahan, "I'd polish off two bottles of tequila a day -- and that was just for starters." Why did it happen? "There was no big reason. I don't have any story to say. I just took it to another level. Because I know how to drink, and I love to drink, I love everything about it. But I think on top of 15, 16 years of drinking, how we do normally, getting paid to drink, you drink when you don't want to drink... you just push it over the edge." He takes pains to say that for most of his bender, he was actually functional -- "I continued to do what I do. I took meetings, I sat in with journalists, I worked right up until the end. Maybe the last two weeks, when I really did lose track of time."

At the end of April, a wheelchair-bound Monahan flew to Houston, where his family lives, and immediately wound up in intensive care, all but given up for dead. "I was the worst person they'd ever seen in the ICU," he says. And the ICU is Fucked-Up-ville. They're like, people like you, they don't last five minutes." But he did. And six months later, he wound up back in New York, ready to get back to work -- minus the drinking -- and looking for a place to live. And actually, maybe that's where the story starts.

An old friend who lives in Harlem happened to be looking for a roommate. Bingo. "Halloween night, feet back on the ground -- dropped off in front of the funeral home across the street from the apartment, which I thought was just beautiful irony." 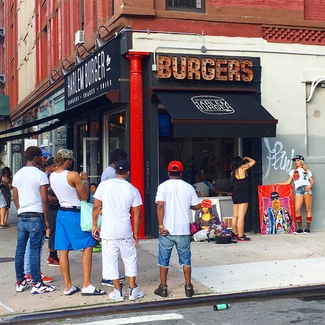 But how do we get from there to here, with a newly svelte and toned Monahan, usually sporting something Adidas, swaggering through his adopted neighborhood with a friendly "How ah ya, brutha?" for seemingly everyone he sees, and an ever-growing stable of Harlemites ready to trust him to spread the word about their eateries and their neighborhood in general? It started with Serafina, the tony trattoria better known as a Madison Avenue institution. "My roommate had said, let's go to dinner," Monahan recalls.

So I was googling places to eat in Harlem, and I couldn't believe there was a Serafina up here. And it sort of clicked with me. So I went up there and I sat down with the manager and said, who does your PR? They're all owned separately, so he was like, we have this person who kinda came with us when we opened up here. And I was like, 'No. You need someone who lives up here. I live down the street, this is what I do, this is my thing.' And I wrote a proposal that night, walked in the next day, cut [the old pubicist] out. She does all the other stuff. When the Kardashians go to midtown, she's all over that. I'm like, let me do my thing up here.

That got the ball rolling. The Monahan juggernaut has since expanded to include Harlem Pizza Co. and its new offshoot, Harlem Burger Co.; Cafeine, a coffee bar/bakery; The Club By Dominik Mager, a salon/lounge; and the soon-to-open Harlem Rendezvous (RDV), a casual modern French restaurant. All are newish and not quite on the radar of non-Harlemites, which for Monahan is kind of the point. "People get, like, OK, we need to do the Harlem destination story. But... it's all the old places. You know, like Red Rooster, The Cecil, Streetbird. And I mean, they're still good and still relevant, but [the reporters] have blinders on, and the people who take them up here don't live here. I'm like, dude, you want the really hot, the really new? Stuff that hasn't been written about? Because they don't live here, they don't really get the ins and outs of it." Pounding the pavement and getting to places and their owners while they're still prepping to open is one of the secrets; the man knows how to hustle.

Harlem and James Monahan are, at first glance, less the perfect couple than the Odd Couple. But -- and I say this with some wonder, as a typically lame Upper West Sider who until lately has rarely gotten above 96th St. -- Harlem today is a lot different from the caricatures we think of today, or the reality of ten or even five years ago. Kfir Ben-Ari, the Israeli-born chef/owner of Cafeine and Harlem RDV, who's lived in Harlem for nine years, remembers the not-so-good old days.

When I came here, it was a tough neighborhood -- I would hear shooting from the window, and my wife would tell me don't stand in the window! I would see all kind of crimes through the window.

But now, he says, "the beauty of Harlem, more than any other neighborhood, the way that you can really live together with natives -- people who have been three generations here, versus new. I feel like people are not playing any games here."

Harlem does appear to be just at the tipping point of gentrification, with longtime residents sharing space with newbies who've migrated from downtown. One block you'll feel like you're experiencing the new Harlem Renaissance, the next you'll feel like you're on the Upper Upper West Side. In five years' time, Harlem may well become the new Williamsburg, with the people who made the place cool overrun by the i-bankers who shot their real estate prices through the roof. But for now, at least, there's plenty of room for everyone -- including Monahan.

His clients, who staked out their turf when the area was more challenging, see him as a kindred spirit rather than a whitey-come-lately. Kfir Ben-Ari says, "The guy, he just came out of nowhere, boom, into this place! He fits me, his style fits me, like a glove to a hand. It's very easy to work with him, because he's not focused on everything, he's focused on what I do. He's really into food and gastronomy in general, and it's very easy to work with someone that speaks your language." And Alper Uyanik, the Turkish owner of Harlem Burger Co. and Harlem Pizza Co., as well as a longtime Harlemite, says, "James was more authentic than anyone with whom we had met in the process of PR pitches. I sincerely got the feeling that if he failed to deliver what he said he would, he would be the first to acknowledge that. This in and of itself is a gift."

So what does it all mean? Is this guy really host to the Harlem hotspots? The Ambassador of Adam Clayton Powell Boulevard? Do we believe him when he says "Harlem is my heaven"? Or is it an elaborate, gimlet-eyed ruse perpetrated by a guy who saw an opportunity and went for it? And does it really matter? I'll yield the floor to Jacci McGhee, a Harlem denizen and singer who performed on one of the greatest records ever made: "I love James. I keep seeing all these different looks.
He can go dressed up or he can dress down. He rolls in the hood however he gotta roll." Hey, who am I to argue?