For the second installment of my photographic investigation 'How Architects Live,' I was invited to Charlottesville, Virginia, to visit with architect Peter Culley and his firm Spatial Affairs Bureau. I had known Peter through work we were both doing in New York but had no idea that he was out in the wilderness for a 'sabbatical' from city life in a cozy home looking out over the stunning Blue Ridge Mountains.

Waiting for Peter at the diminutive Charlottesville airport (complete with crafty dioramas depicting the history of the region), I expected he would show up in a sleek, 1960's sports car. He pulled up in a beat-up black pick-up truck, explaining that he used to own such a car but it bottomed out on the dirt road up to his house. I was now thoroughly intrigued.

While Peter and his wife Lynn have since relocated to Los Angeles, this place seemed a wonderfully paradoxical existence to photograph: a bustling architectural studio downstairs (complete with renderings and models for huge urban projects like the Metropolitan Museum of Art's front plaza) while in the quiet upstairs living room the huge picture window faced directly into an expanse of forest and across into the splendor of the Blue Ridge Mountains.

As an architectural photographer, it was a pleasure to work with both structure and landscape equally, as there was no escaping the vastness of the environment. I spoke with Peter about his current practice and how it is reflected in his lifestyle:

JD: Tell me a little about yourself and the architecture you typically design:

PC: I am British but settled in the USA. My wife is American and ethnically half Swedish and half Thai so I suppose we're both always slightly abroad. We lived in Charlottesville, Virginia at this house where we got married, and have recently moved to the Los Angeles area in Venice, right on the beach. The topography and vegetation are quite different but we still have a big open view. Although LA is notoriously a city of freeways, we cycle much more than we ever did in the country.

There is a definite cultural theme in my current and previous work. I graduated from the Bartlett School of Architecture, London where my final project was for a museum of sound set in Barcelona and the mountains of nearby Montserrat. I was previously an Associate Partner for Rick Mather Architects where I ran the Virginia Museum of Fine Arts project, and am still a consultant for the Southbank Centre master plan, Europe's largest arts complex. I also worked with Kathryn Gustafson on the National Botanic Garden of Wales Great Glasshouse Interior Landscape.

JD: What are current projects now in your own work for Spatial Affairs Bureau?

PC: Our recent and current projects include a study for a William Eggleston Museum, ideas for a vertical 'micro-city' in a disused 1.5 million square foot Sears distribution center and a master plan for the Crosstown neighborhood in Memphis connecting the two; site furniture, kiosks and a guard house / storage facility at the Metropolitan Museum of Art, New York as part of the entire 5th Avenue Plaza redesign in collaboration with Olin and Rick Mather USA; a private house, studio and gallery in North London for this year's Royal Academy Summer Exhibition Jack Goldhill sculpture prize winner, Rana Begum; ideas for a hotel in Marfa, Texas; and consulting work for the Aga Khan Museum in Toronto. I also now teach in both the undergrad and masters programs at Woodbury University; I think it's a school to really watch on the west coast.

JD: What freedoms do you exercise in the design of your own living space as opposed to a client's? Conversely, how have past projects for clients influenced how you see your own home?

PC: When you organize your own living space I think the process is often much more organic. You can try something out and then change it if you like. You don't have the same time limitations that a client brings and perhaps the building process is not quite so intimidating as it can be to clients outside of the trade, though it's rarely straightforward. The cliché of architects never finishing work on their own homes is not without foundation. I seem to have a habit of finally 'finishing' only at the time of moving on so I suppose there is a diagnosis somewhere in there. But I do also think architects have a tendency to tackle work for others as if it were for themselves, and that sense of ownership, although sometimes unsettling, even unpalatable for the client, is quite crucial to getting a really successful result. I think it tends to be a rather delicate balance.

You build more for others than you do for yourself. Clients normally come from entirely different backgrounds and so have their own unique set of criteria. For me one of the most interesting and privileged aspects of this type of work is the wide ranging groups of people you make contact with - clients from any walk of life, consultants on the team, contractors, artists, manufacturers, even critics. In many ways, architecture is a practice of limits that come partly from working with others.

JD: Is your home a good example of your design principals?

PC: This house was rented and is certainly in many ways not to my architectural taste or standards of construction. But I was really taken with the way it sits on its site. There is a very long curving drive that goes up steeply in a hairpin over about half a mile through tall, skinny tulip poplar trees that were stunning in the autumn. I never once went up there without being excited by the experience. You really are removing yourself from any sense of the community around. I think some people found that unnerving. When you finally get to the top and the trees open out, the house looks very modest, makeshift really, and gives no hint of its true extent or the view beyond. But once you get inside, the spaces keep unfolding both horizontally and vertically, and you experience a series of fairly extraordinary framed views of the Blue Ridge Mountains in the distance. 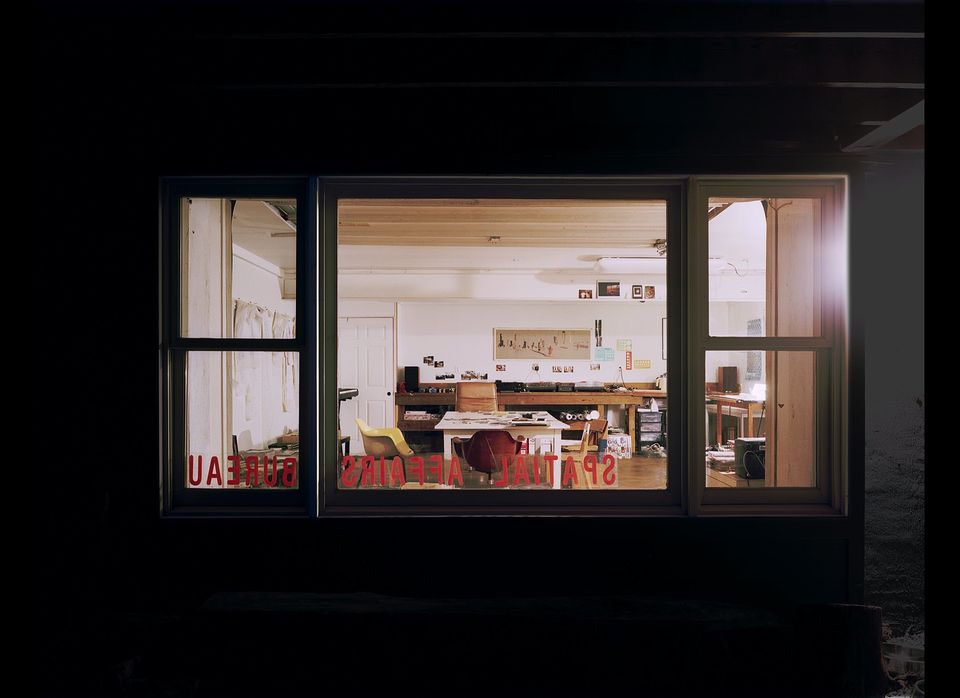