My dad died a few weeks ago. As an artist , he never made a cent. He made his living as a carpenter, and working other odd jobs here and there. 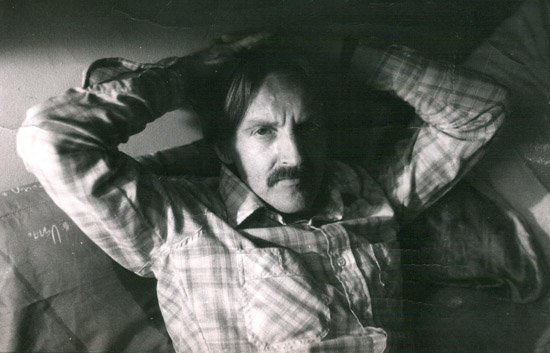 I'm up here in Oakland right now, going through his stuff, his portfolio cases, his art work. He was a painter, but primarily, later in life, he drew. Drawings that make you think of the New Yorker and George Grosz all at once, along with his generation, the '60s -- that all at once too. 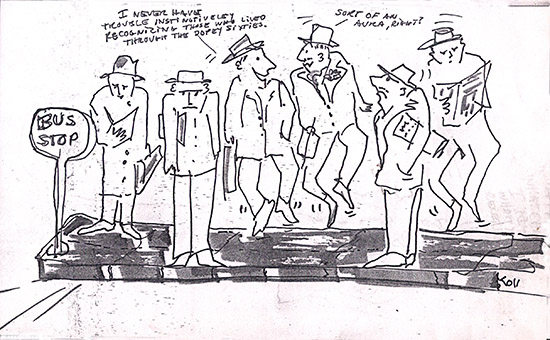 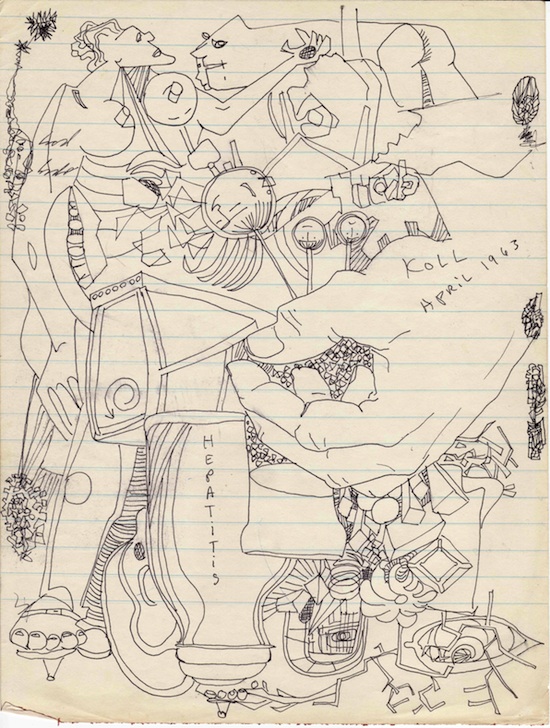 They are spread all around me. I'm tacking them to the walls. They are hounding me, reminding me of our bitter fights, the love we had. He's an amazing artist no one has ever heard of or seen. He liked it that way, it would seem.

He could never trust a car mechanic, or a doctor. But he trusted the street. The guy who had nothing but his word and a promise, perhaps including a stolen vintage camera or stereo to offer up front. Something that appealed to my dad's sense of style. He was a collector. Of people, of stories, of images. Perhaps you could call him the village shaman. Of San Francisco.

And he always had these drawings strewn about his studio. He always had a little space to himself. 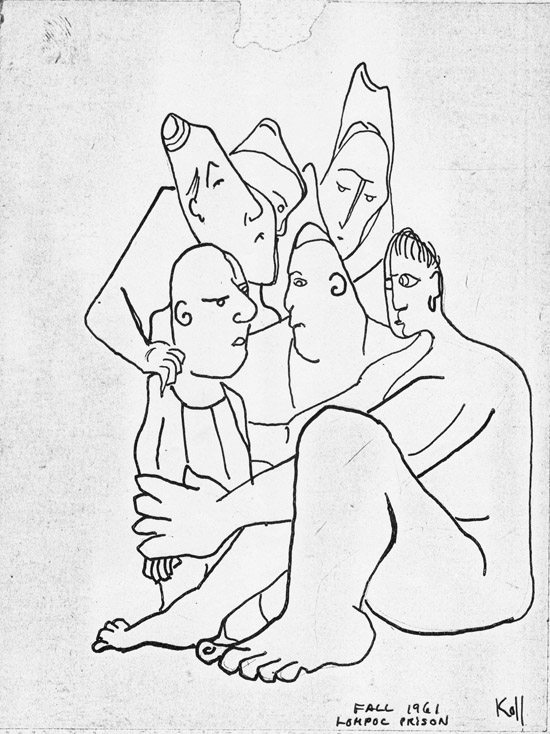 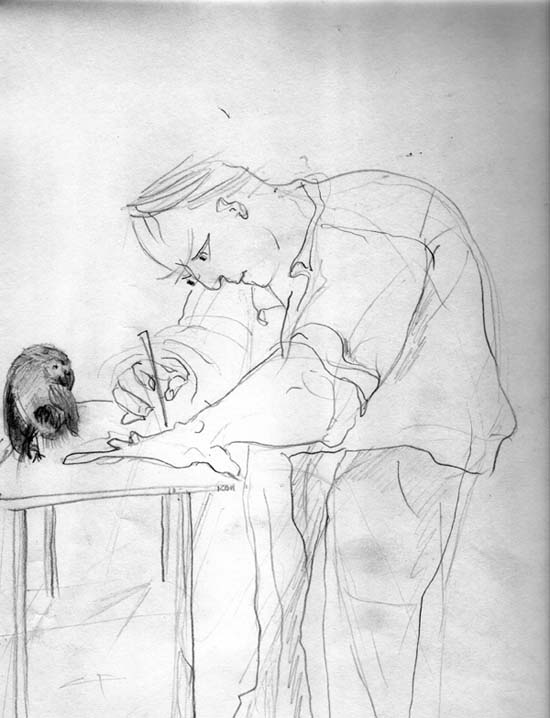 Now he's gone. So, I'm sitting here, thinking about how he got me a job driving a cab in the nineties, at night, in SF. He seemed pleased with himself, having gotten me into his cab, albeit a deadend "way of life" -- as we called driving at night in those days. He had just "retired" from driving cab number 55, the best in the fleet, and I was looking for a way to escape an LA girlfriend. He had driven for years with one eye blind, very fast, at night. No one the wiser. 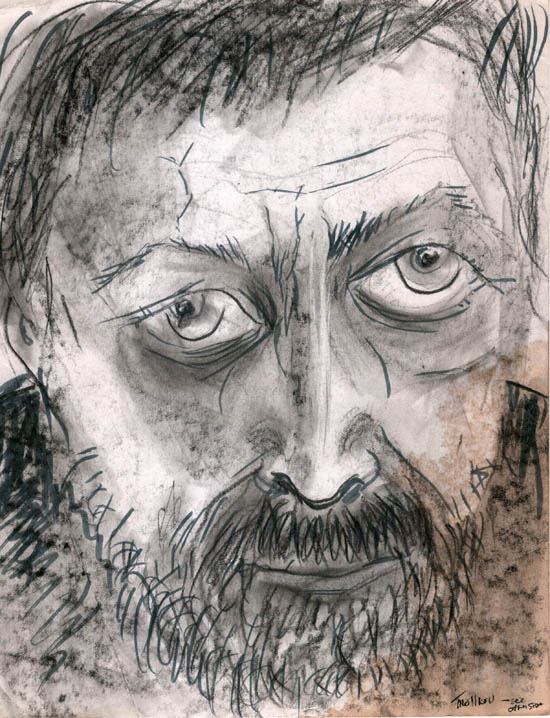 And so, again (forgive me) I'm sitting here, thinking about how he tried, in his own self-deprecating way, to encourage me to be an artist. While at the same time, he bugged me about money -- how did I get it, why didn't I get enough, why I didn't ask for enough when I was short?

Why do artists of any salt always do that?

Simple: They make the decision early on. It's like becoming a monk or a nun, but better, so you at least get to have sex.

As a kid I remember thinking I'd be happy working at a gas station for the rest of my life as long as I could be an artist. That was before I really knew my dad. I was a foster kid, taken away from him as a child.

But about 10 years ago, I had a major accident, almost died, and my dad took me in. I learned who he was through that. About four years ago, I began painting pictures of him -- kind of as a way to get to know him. My mom too. People I don't even know who look at the paintings know what kind of people they are. I don't need to tell them. 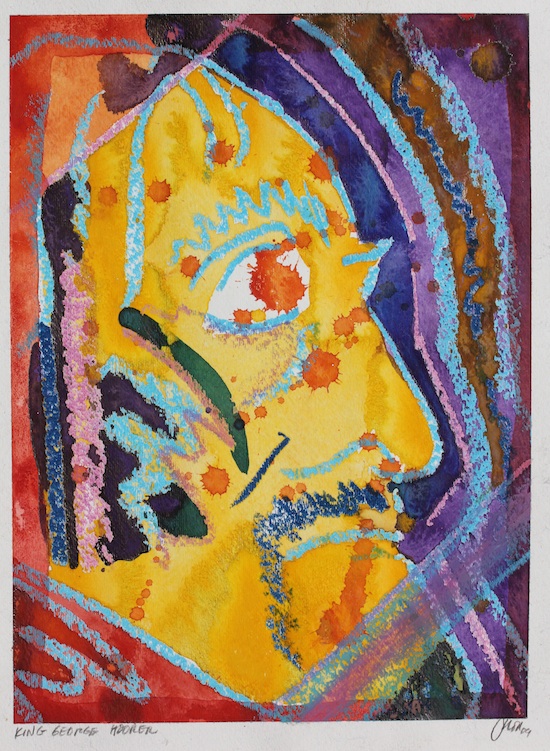 So, how do artists survive?

Van Gogh was a preacher in the coal mines of Belgium while doing his first drawings. He tried his hand at working in a gallery. 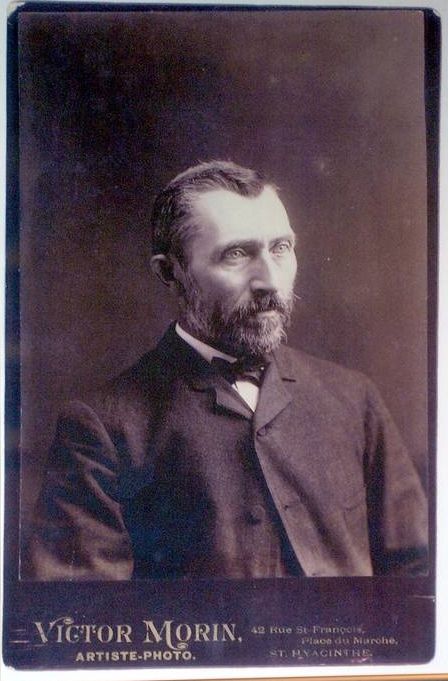 Magritte worked as a banker wearing nice suits and kicking people in the ass with his boot when they weren't looking. 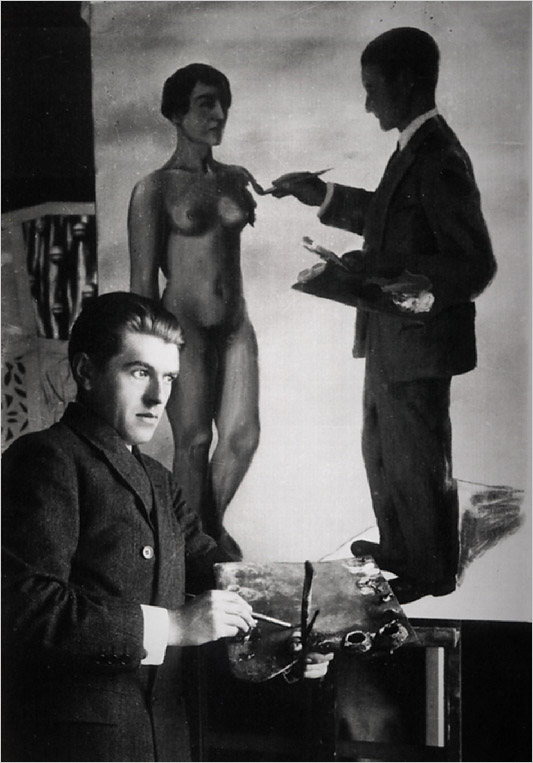 Eduard Manet was supported by his mother, who almost stopped her decades-long support when he was 45. He put up his own show in a store front during the annual Salon in Paris in April in the late 1867 and very few people came. He finally made it big in the last years of his life.

Many artists teach from time to time, such as Lisa Adams. John Baldessari (one of my teachers at Cal Arts) is another example. These two are examples of artists who know what it means to be an artist while teaching -- never expecting your students to be cookie cutters of you.

In other words, the day job doesn't get in the way of the message. That's what being an artist is all about. And sticking to it.

Getting back to Lisa Adams, she's recently gone through a harrowing series of operations on one of her eyes, and survived. I won't begin to describe what she's been through -- because I went through it on both of mine. She had to wait in line to get her surgery due to her financial situation, wearing two pairs of glasses to paint for months upon months... 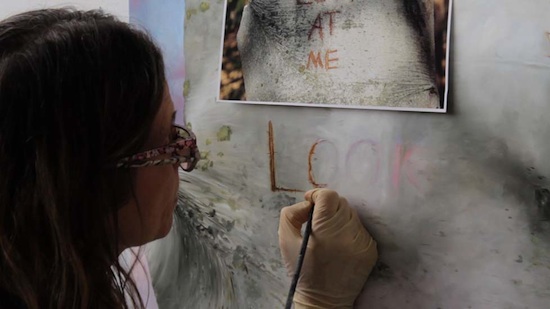 She has a show coming up in April at CB1 Gallery in downtown LA showcasing work done mostly during her ordeal. You don't want to miss it. Her work is transcendent, amazing. 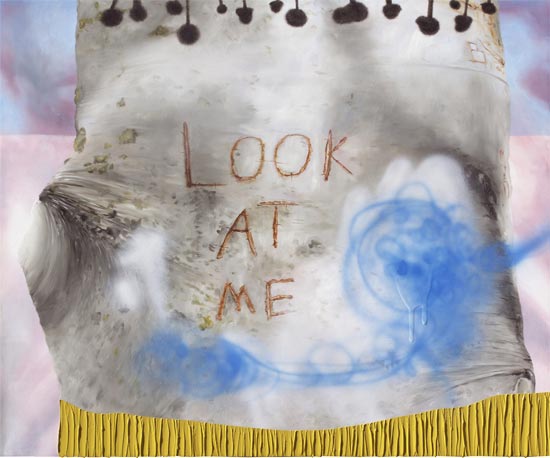 Another artist, who recently showed with Lisa at the Barnsdall Municipal Art Gallery in Hollywood, is Fatemeh Burnes. She has been spending the last 6 months putting a show together at Mt. San Antonio College, organized by her students, which opened March 14. During the time she prepared for her show, she's endured chemotherapy for an inoperable tumor on one of the major arteries in her neck. She's another example of how artists survive. 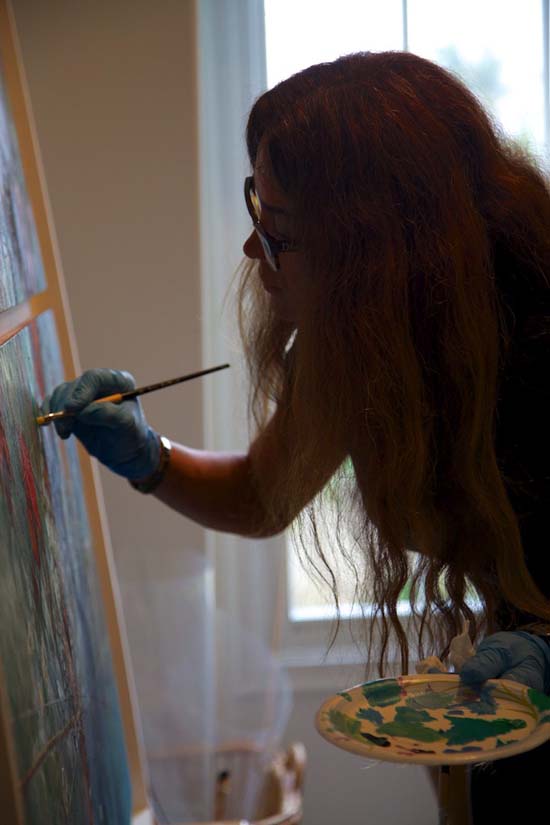 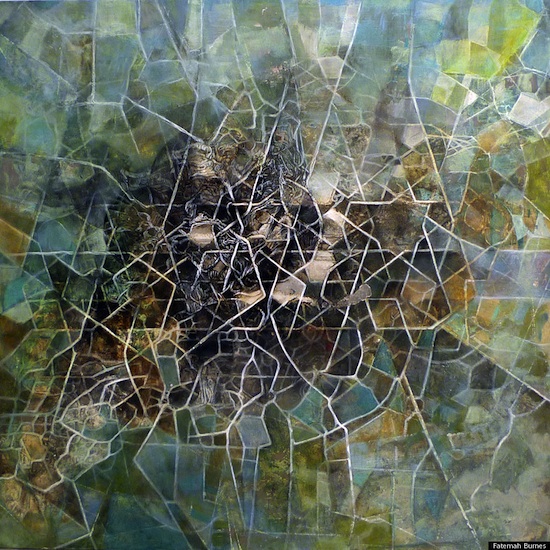 Sarah Danays, a well known sculptor from England who is unknown and nearly alone in this country, has been working through a gorgeous series of assemblage and carved stone sculpture that reflect a very difficult personal life. For a good deal of her career, she worked as a freelance publicist to fund her art. A show of six years of her work, called 'Faberge Gothic' will be the inaugural event of the Venice Institute of Contemporary Art (ViCA), on view during Brit Week from April 23 - May 6. 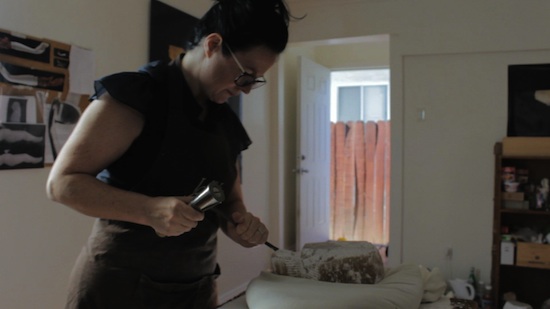 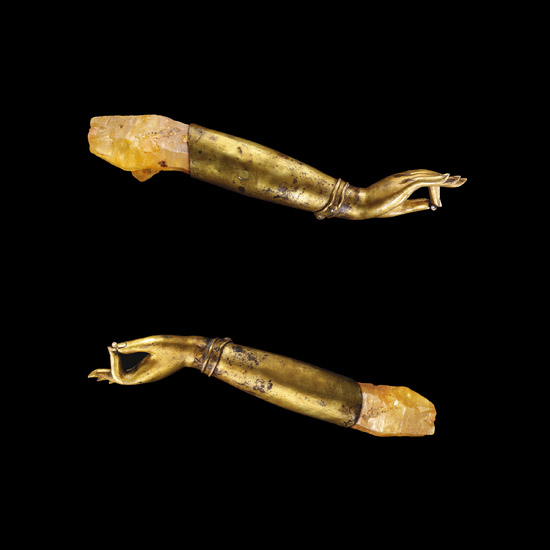 The point is, artists' lives, and they way they survive, are as important as their work, because their work is the result. We get to see the work, and we can feel the life.

You can see films about these artists lives and work, as part of Art/World's documentary series, during several nights of screenings during Brit Week as part of ViCA's on-going events. Find out details about these screenings at www.veniceica.com.

This is the first in a regular series of articles for HuffPost about important (whether known or unknown) artists and personalities from the art community who survive. And thrive. Stay tuned...