Have you ever had the this experience? Your phone rings, a friend says "Let's meet for drinks." You say: "I'll be there in 15 minutes." Then, when you show up, your friend is half drunk and slurring "WTF? You said 15 minutes... That was nearly an hour ago." And you say, sheepishly, "Sorry. I lost track of time."

Of course you have had this experience. We ALL have. Although, depending on what part of the country you live in, the half drunk "friend" will be pants-around-the-ankles fighting-with-cops drunk.

"I lost track of time." We all say it. We all think it. However, this excuse is a flat out 100 percent absolute lie. "Losing track of time" implies that previously we had a tight grasp on accurate time perception... however, in this one particular instance, we "lost track of it."

You see, nearly none of us is any good at accurately estimating the passage of time.

In fact, according to new research conducted by This vs That, just 17 percent of people can accurately estimate the passage of time.

For a recent experiment, This vs That gathered 53 people (ages 20-50) in a hotel conference room, sat them in chairs -- arranged in rows. Participants were asked to close their eyes until they were instructed to open them. Just prior to closing their eyes, participants were told when the experiment was over, they would be asked to estimate how long they had just sat quietly.

After just 2 minutes and 50 seconds, participants were asked to write down their time estimates on a piece of paper and hand them in. 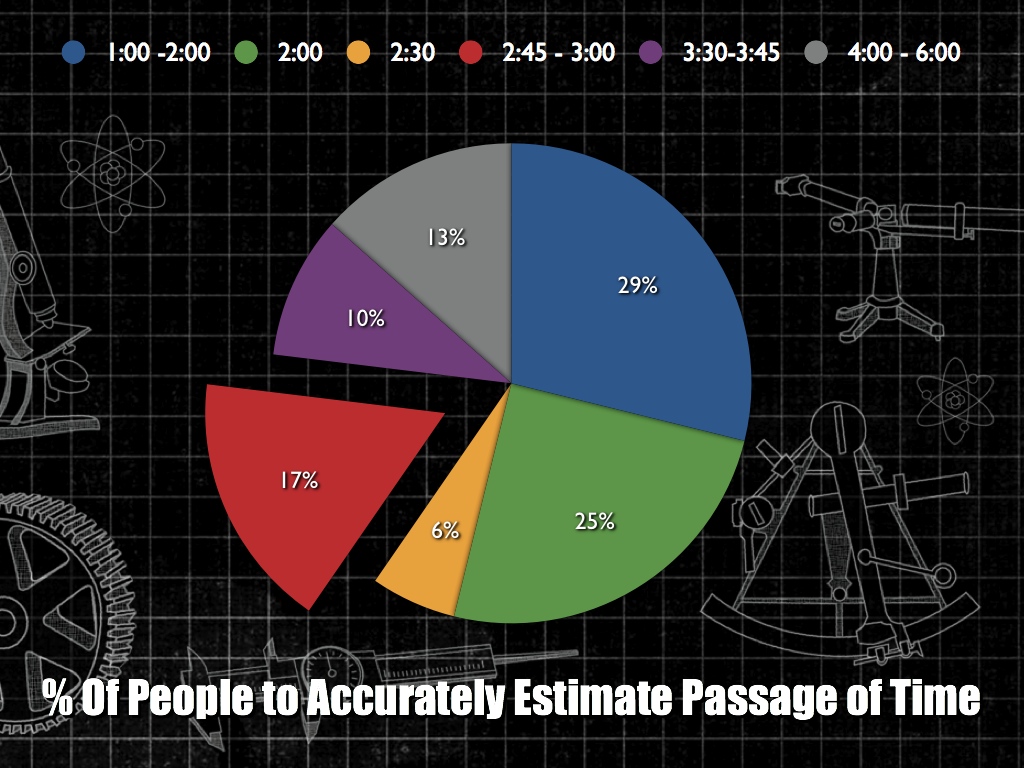 According to This vs That's analysis, just 17 percent of experiment participants were able to accurately estimate the amount of time they sat quietly, with just nine (9) of them estimating between 2:45 and 3:00 minutes.

It should be noted that NO ONE estimated precisely.

The largest percentage of people estimated they were sitting quiet for between 1:00 and 2:00 minutes, with the second highest being those people who estimated 2:00 minutes exactly. The estimates of 13 percent of participants ranged between 4:00 and 6:00 minutes.

The brain's perception of time involves processes linked to memory and attention: witness the impression that time is passing more quickly when we are busy, or doing something amusing or exciting. Time flies even when we are in love. In contrast, a watched pot never boils. Minutes drag by when we are bored. The Guardian

This vs That's initial research is in line with previous research into time estimation, which has revealed that our ability to accurately estimate time is influenced by our emotional state, how hungry we are, how tired we are, whether our eyes are open or closed, what we are doing, among many other factors.

**THIS VS THAT IS LOOKING FOR VOLUNTEERS**

Will you participate in a follow up to our time estimation experiment? It will be done over the Internet and won't take long. If so, click HERE and sign up.

Jon Hotchkiss is the creator of the new six-hour science series, This vs That. Would you kindly like him on Facebook, so he can stay in touch? Thanks very much.