Ted Leonsis became the new owner of the Washington Wizards a few months ago. The team he now leads won only 26 games in 2009-10. But through the quirks of the bouncing lottery balls, the Wizards managed to land the number one pick in the 2010 NBA draft. And with John Wall now leading the team, Leonsis and the Wizards seem to be feeling good about the team's future prospects.

Arturo Galletti -- a mere blogger -- is apparently less impressed. Mr. Galletti argued this past weekend that the Wizards have a chance to be the worst team in NBA history in 2010-11. Mr. Leonsis -- via his own blog -- took exception to this forecast.

As I will note below, I have some reason to be interested in the debate between these two individuals. Before I get to this reason, though, let me briefly discuss how I see Washington's 2010-11 prospects.

The story of next season begins with where the team was last year. The table below lists the ten players who played the most minutes for the Wizards last year. It also reports each player's Wins Produced (here is an explanation). As one can see, these ten players produced about 27.7 wins last year. In other words, whatever success the Wizards had last year can be linked to these players. 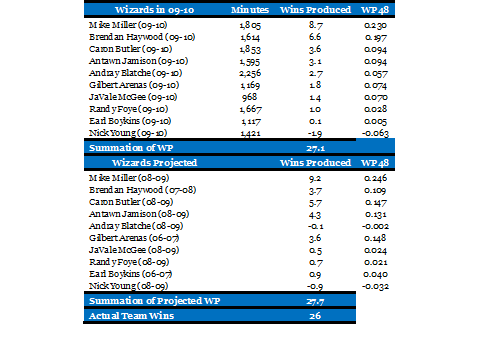 This analysis also tells us why the Wizards might have even more problems next year. The quartet of Mike Miller, Brendan Haywood, Caron Butler, and Antawn Jamison were expected to produce about 23 wins in 2009-10. When the season was over, these four had produced 22.0 wins. The remainder of the roster, though, didn't produce much more. And unfortunately, all four of these players will be playing elsewhere in 2010-11.

Who did Leonsis and the Wizards get to replace these four? According to ESPN.com and Yahoo.com, Washington's depth chart currently is as follows:

Of these players, only John Wall didn't play in the NBA last year. The following table details what these nine veterans did last year. In looking at these numbers keep in mind that an average NBA player will post a 0.100 WP48 [Wins Produced per 48 minutes]. As one can see, every single veteran on this team was below average last year.

If we make a guess at how many minutes each player will play per game we can estimate the number of wins each player will produce. Adding up what we see for all nine players, and we see a team -- before we get to John Wall's contribution -- that only wins six games. In other words, this is a very poor collection of NBA veterans.

Now there are two things to keep in mind. First, we have not considered the contribution of John Wall. Unfortunately, there is reason to think -- as Mr. Galletti noted in his post -- that Wall may not make much difference next year. One should remember, though, that we cannot forecast perfectly what rookies will do (and there is evidence the NBA doesn't do this well either). So it is possible that Wall will defy Mr. Galletti's analysis.

It is also possible that the veterans can do better. For example, Gilbert Arenas produced 8.6 wins in 2006-07. That same season, Kirk Hinrich offered 5.6 wins while Josh Howard produced 8.7 victories. And Hilton Armstrong -- again back in 2006-07 -- wasn't nearly as awful as he has been every year since (he produced 1.1 wins that year). If these players return to what we saw four years ago (and yes, that is the best these four ever played in the NBA), the Wizards will be better next season.

Of course, hoping players will return to what we saw in what is now the ancient past appears to be the very definition of "grasping at straws." And that illustrates why the Wizards look to be in trouble.

At the end of the day, wins do not happen by magic in the NBA. Someone has to take the actions necessary to create wins. Such actions include shooting efficiently, rebounding, getting steals, and avoiding turnovers. It is these tangible actions that produce wins in the NBA. And when you have a collection of players who haven't produced wins in the recent past, it seems likely you will not be very successful in the near future.

In other words, it looks like Mr. Galletti is on to something. The Wizards may not be the worst team ever (then again, maybe they will be). But they are not likely to be very good next season.

For me to essentially agree with Mr. Galletti is not surprising. If you look at his blog post you will see he is also employing Wins Produced, the same method my co-authors and I detailed in The Wages of Wins and Stumbling on Wins.

Why should you believe what is written in these books? Well, let's consider the following comment offered on Stumbling on Wins last May:

David Berri and Martin Schmidt have written a very interesting book called Stumbling on Wins: Two Economists Expose the Pitfalls on the Road to Victory in Professional Sports.

I just concluded reading it. I recommend it highly to the passionate, opinionated fan. The stats speak loudly and clearly.

This is a wonderful counter cultural look at the world of sports by economists and math majors. Buy it today.

The author of this wonderful comment on our book was Ted Leonsis. Yes, the stats do speak loudly and clearly. And the message they send is that this collection of Wizards will probably be a very poor team in 2010-11 (and one suspects, this is not the message Mr. Leonsis is hearing from his employees in Washington).

A few more thoughts have been added to this story at The Wages of Wins Journal (see the bottom of the post in that forum).