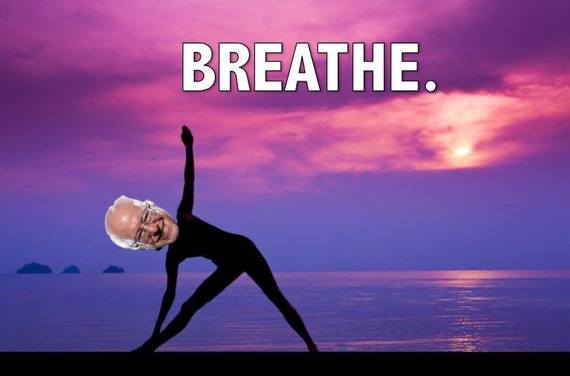 Ted Cruz is hollering at Donald Trump to "Breathe, Donald; breathe." Marco Rubio's jabbing him about doing yoga onstage at debates. And both have tried to capitalize on the moment by selling yoga products on their campaign websites.

Since watching that Republican debate, I can't tell my students to breathe without feeling uncomfortably like Ted Cruz in leggings and a ponytail.

Some of my colleagues are ignoring the election completely. They think politics is crass, negative, not spiritually relevant. They'd rather be in the studio meditating or chanting loving prayers toward all the candidates. That's super nice, too, and I'm totally on board with sending some peace and ease to all of those folks, even the ones who make my blood boil, because damn, this election season is a bitch.

I rush home after teaching to catch the tail-end of the debates. I spend Saturday nights in front of the TV cringe-watching Donald Trump's bizarro meandering victory speeches. I troll Twitter in the wee hours of the morning for the latest analysis on who's projected to win Wisconsin and New York.

I haven't felt this politically invested in years.

I am a progressive Democrat. I am also a lifelong feminist and will support Hillary Clinton tooth-and-nail, should she end up as the Democratic nominee. At first I figured she'd be my candidate all the way. I mean, go first woman president! and all. And who's more qualified, right?

But, very quickly, very easily, Bernie won me over. His authenticity, his passion, his commitment to economic justice? Well, geez: he's a total yogi.

1. The yamas and niyamas, yoga's ethical systems of personal observances and guidelines for being in the world, could stand in for Bernie's platform. Bernie's all about ahimsa (non-suffering, or non-violence). He voted against the Iraq War, he's dedicated to ensuring universal health care, and he's outspoken about supporting basic human rights. Not to mention his commitment to the planet. Bernie's passionate stances on fracking and climate change are the ultimate in ahimsa, calling out destruction against the Earth, and recognizing the Buddhist and ecofeminist values of interrelation and interdependence.

2. He's authentic and at ease in his skin. One of my favorite definitions of yoga is something I read from Buddhist yoga teacher Michael Stone. He described yoga as the process of learning how to be real. In other words, dropping all masks and finding ease in your being. Sounds pretty great, right? Pundits said Middle Americans wouldn't vote for a 74-year-old Jewish guy from Brooklyn. But his ease in his own skin makes Hillary seem rigid and controlled. Bernie is wholly his own, unpretentious, charmingly ruffled.

3. Bernie's all about unity and togetherness and looking out for the little guy. And if that isn't yoga, what is? "Yoga," from the root "yuj," meaning "to yoke," as in becoming one, whether in body/mind/spirit, or in bringing the masses together in the name of shared values. (And, if I may, in that regard, he's way more Christian than the supposedly "Christian" Republican candidates who want to carpet bomb the Middle East and register Muslims and eliminate affordable healthcare.)

4. He's got the whole living-simply-in-Vermont thing down. Yoga philosophy says life's not about getting lost in mindless, greedy acquisition (aparigraha, or non-possessiveness.) In that same regard, you could say Bernie models brahmacharya (or non-excess, moderation). What other presidential candidate is beloved for flying coach?

5. He's honest and truthful, "the most widely trusted presidential candidate of either party." Yoga philosophy calls this essential quality satya (or truthfulness). No pretense. Not flip-flopping or crafting his spiel to suit focus groups. Just staying on message.

6. Bernie's all about asteya (non-stealing), standing up for the rights of the working and middle classes as a self-proclaimed danger to Wall Street. He's ethically clean (or what yoga philosophy calls saucha, or purity). Since his campaign is funded by so many small individual donors, and not by powerful Super PACs, he's not bought or beholden. No pricey Goldman Sachs speeches or financial scandals to be found here.

7. Bernie's central message is that we need a political revolution. At its heart, yoga is revolutionary, too: a countercultural practice all about transforming your life and easing suffering. Bernie's campaign calls to challenge the powers that be, to come together to fight injustice, and provide for everyone, young and old, rich and poor, black and white, to flourish. This is so much yoga.

8. Because he looks really damn good in that Utthita Trikonasana pose up above.

9. Bernie keeps on trucking even when he loses a primary, or when the mainstream media has long written him off. Not lamenting it. Not whining over it. Just jumping back in and staying committed to the cause, all the way through to the convention.

10. Bernie's campaign is uniting people in an unprecedented way. He's stirring up populist fervor, and thanks to that, his campaign oozes with prana, life force, energy. I feel it even now.

He's been practicing yoga his whole adult life. Likely he doesn't even realize it, and maybe it doesn't look like bendy gymnastics tricks, but oh my yes, it's yoga: the standing up for social justice and equal rights and lovingkindness and non-violence, even when it hasn't always been popular or politically safe.

I was watching the Flint debate the other night when a voter from Michigan asked Bernie toward the very end of the evening if God is still relevant. His answer melted me. It was so much yoga.

"I think -- well, the answer is yes," Sanders said. "And I think when we talk about God -- whether it is Christianity or Judaism or Islam or Buddhism -- what we are talking about is what all religions hold dear and that is to do unto others as you would like them to do unto you," Sanders added.

Thank you, Bernie, for teaching me yoga.

An earlier version of this essay first appeared on YogaDork.