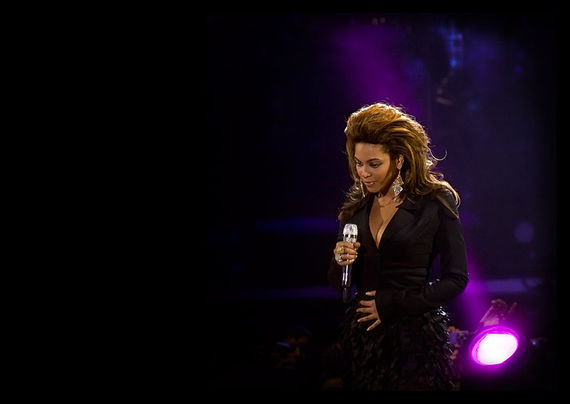 Beyonce's label, Ivy Park, launched in collaboration with British fast fashion company Topshop, is quickly falling short of her stated goal to "celebrate every woman and the body she's in while always striving to be better".

Not every woman is being celebrated in Beyonce's world and definitely not the women workers in South Asia, where her clothes are made.

Last week's exposé by a British tabloid revealed that the female workers responsible for making -- but not inspiring, designing or profiting from -- Beyonce's clothing at MAS Holdings factory in Sri Lanka are experiencing tragically ironic conditions.

While Sri Lankan women are making the clothing celebrating female empowerment, they're clearly not seeing many if any of the benefits. Despite the owner of Topshop ranking 107th on Forbes' richest list, with a net worth estimated at $6.7 billion, that wealth isn't trickling down to Beyonce's women working as sweatshop slaves in South Asia for just 64 cents an hour.

Living in cramped conditions with communal showers (which the women share, unsafely, with men), no kitchens, restricted freedoms, and curfews at night, the women do not have rights of association. Beyonce's sweatshop workers, unlike our workers in the United States, are not allowed to form unions and a collective voice to improve their unsafe, unfair and inhumane conditions.

These conditions, sadly, are the current fashion standard, especially in countries with little to no regulation such as Bangladesh and Sri Lanka.

This is why Ivy Park's response to the scandal is so disconcerting. They stated, in response to the investigation, that they have a "rigorous ethical trading program" and that they're "proud" of their "sustained efforts in terms of factory inspections and audits". Ivy Park "expects" suppliers to meet their code of conduct, but they clearly don't ensure that laborers are, in fact, ethically treated.

This is a consistent and characteristic drumbeat by almost every major brand's corporate social responsibility desk. There is a lot of "pride", a lot of "effort", and a lot of "expectations" on suppliers. What a complete abdication of responsibility.

When a company is sourcing in countries where these practices are the norm (and to be clear they are sourcing in these countries for the sole purpose of getting dirt cheap prices) we in the West cannot continue to be okay with our brands saying that the responsibility is on the factories.

Fashion companies need to stop shifting the burden of proof to its suppliers. Brands know full well what they're getting into.

In Beyonce and Ivy Park's case -- and every other major fashion brand's case -- there is overwhelming evidence that working conditions in countries like India and Bangladesh are dismal. This is well known. Despite this, brands continue to choose to make their products in those countries because of the cheap prices.

Even more empowering than the buck stopping with the brand, however, are citizen consumers who ultimately sit in the driver's seat, buyers of Beyonce's brand. Let's make empowerment mean something and buy brands that celebrate every woman, from those dying the textiles to those assembling the clothes to those wearing them.

"Striving to be better" won't cut it. And until Beyonce switches suppliers, this is going to be about celebrating Western women only.