By Tarun Wadhwa
Tarun Wadhwa is a Research Fellow with Singularity University studying how exponential technologies can be used to solve public policy problems. 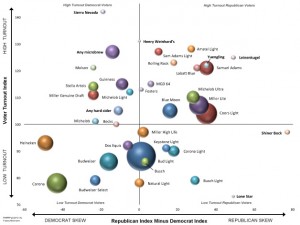 If your favorite soda is Diet Dr. Pepper, the chances are that you'll be supporting Mitt Romney. Pepsi drinker? You're most likely voting for Barack Obama. If you drink Mountain Dew, you probably don't care either way.

These types of conclusions may seem simplistic and superficial, but both campaigns are betting that they will be the key to deciding who the next President of the United States is.

It's more than what you drink, what you shop for, who your friends are, what websites you visit: all reveal clues to your political leanings. Campaigns have entered the era of "Big Data"--they target voters based on scraps of information they gather from unlikely places.

Thanks to the rise of mobile technology and social media, the number of records collected by data brokers on voter behavior has tripled--from 300 pieces in 2004 to more than 900 pieces today.

Campaigns care about your personal life

Voters used to be the ones obsessing over details of a candidate's personal life. Now the tables have turned. Campaigns research the personal lives of the voter.

Micro-targeting, a technique that delivers ads based on the personal traits of a voter, was once considered impossible. But in 2004, it was recognized for helping George W. Bush defeat John Kerry. Now it is used by almost every campaign.

Because of the intricacies of our electoral system, a relatively small group of people ends up deciding the outcome of elections. In the 2000 Presidential campaign, hundreds of millions of dollars was spent on reaching just 7 percent of voters--fewer than 8 million people. Even a small advantage in mobilizing potential voters in a swing state can determine the difference between a win and a loss.

In this election cycle, more than $3 billion dollars has been spent on broadcast-television advertising, which has remained the dominant form of political communication for the last fifty years. But times are changing. Television purchases are no longer as effective as they used to be. A study showed that 88% of voters with DVRs skip ads and that 45% use something other than live TV as their primary mode for viewing videos. These proportions are even higher in younger demographics.

The next frontier: digital behavioral advertising

Just as television advertising revolutionized the field in the 1960s, this election will likely mark digital-behavioral advertising as the next frontier in voter outreach.

As a nation, we are already divided along partisan lines. We access different media, each with its own messaging and focus. Now we will receive different messages depending on who we are. Zac Moffatt, digital director for Mitt Romney's campaign, said to The New York Times that "two people in the same house could get different messages," and that "not only would the message change, the type of content would change."

In an article for Stanford Law Review, Daniel Kreiss, a journalism professor at University of North Carolina, Chapel Hill, explains how this can have negative long-term consequences for democratic participation. With so much sensitive personal information in so many hands, there are risks of data breaches and unauthorized disclosure.

Citizens may hesitate to engage in political discussion on line for fear of being tagged and put into a marketing database. And the high cost of political data and consulting activities may make it difficult for less affluent candidates to compete effectively. Perhaps most worrying, campaigns may "redline" an electorate (by ignoring voters who won't be sympathetic to their views because a model deems them unworthy of investment).

Sophisticated modeling and targeting will become commonplace at every step of the political process. NGOs, interest groups, and candidates for local office will be the next to adopt these methods.

United in Purpose, an evangelical Christian non-profit, is currently using such technology to assign points to voters based on whether they like NASCAR or fishing, and whether they are on anti-abortion or traditional marriage lists. If these voters have a score of over 600 points, they are considered "serious about their faith". They will be contacted if they have not registered to vote.

Many voters would be surprised to learn that their interactions with both campaigns are being recorded and analyzed using technology similar to what Target uses to determine whether teenage girls are pregnant. When voters do learn what their candidates are doing, as many as 86 percent want this to stop. They regard it as an invasion of privacy. Yet these types of activities are legally considered political speech, so there are hardly any restrictions in place.

What is most worrisome is that there is no easy way to opt out of these databases, or to limit what information is collected about you, or how it is used. Sadly, we can't "de-friend" or "unfollow" the politicians.