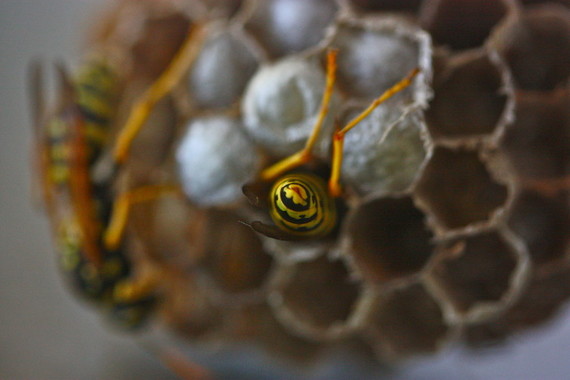 South Africa is home to a number of invasive insect species. One such species, the Vespula germanica (German wasp), was introduced into the country in 1974. Another, the Polistes dominula (European paper wasp), arrived in 2008. Both species are thought to have been introduced via air or sea cargo.

These invasive species are bad news for everything from biodiversity to agriculture and horticulture to viticulture. They feed on indigenous plants. They prey on native species. Anyone who's ever had a close encounter with the European paper wasp or the German wasp will know, they deliver a nasty sting.

I learned this first hand while conducting research for my PhD: I was stung more than 40 times as I attempted to collect nest material and wasps to use in experiments evaluating their susceptibility to various biological control agents. These are biological organisms that are used for pest control instead of, or alongside, chemicals.

I selected a few agents I suspected would target these wasps without harming other insects. The agents in question occur naturally in South African soils. The results are promising: all four of the agents proved able to infect and kill both invasive wasp species' larvae. This suggests that these biocontrol agents could be used in the future to effectively control the invasive wasps - before their populations spread.

A spread is looming

In countries like New Zealand, where the population of especially the German wasp is dense and widespread, they are threatening endemic invertebrates such as caterpillars and orb web spiders.

The good news for South Africa is that these two invasive species are still contained in quite a small geographical range. The wasps' populations are restricted to the Western Cape Province. This may have something to do with sub-optimal climatic conditions which serve as a physical barrier.

Their movement and spread tends to follow lines that are close to human habitation, since it means easy access to food sources. Wasps are absent where there are fewer humans or less cultivated land to support high densities of invertebrate species, sugary plants and water - like high up in the mountains.

But research suggests that these two wasp species may begin to spread in the future. This is because ecoclimatic conditions along the southern Cape coastal belt and the eastern escarpment, up toward the eastern half of sub-Saharan Africa, are more favourable than the marginal habitat the species currently occur in.

This raises concern for potential expansion. And once the first move is made, rapid dispersal is likely to follow.

Insecticides and biopesticides are the primary and most effective method way to control the German wasp and the European paper wasp. But they don't ensure area-wide, long-term control. That's why it's important to expand on available control options and consider biological control agents.

There are a number of non-chemical options. Biocontrol agents like parasitoids, pathogens, entomopathogenic nematodes, entomopathogenic fungi and predators have been used in the past to control other invasive social insects. These sorts of approaches have shown potential, demonstrating good levels of control against social wasp species.

These agents are able to infect some other pest insects, as has been proved by earlier research. But they pose a low risk to non-target species if applied correctly in field. This would ensure that native species are protected. Also biocontrol agents can be self-sustaining because they multiply if a host is available. In addition, they can be artificially mass-produced in the laboratory and then administered in the field to ensure a reduction of a pest population.

I tested the pathogenicity of various biological control agent species against the German wasp and European paper wasp larvae in the laboratory under controlled conditions. My biological control agents were four that are believed to be indigenous - three entomopathogenic nematode species and one entomopathogenic fungi species. (They might occur somewhere else in the world, but every square metre of soil have not yet been analysed, so it's impossible to know for sure).

Until now, no naturally occurring EPF or EPN strains from South Africa have been confirmed to be pathogenic to wasps. I wanted to identify indigenous biological control agents for several reasons. For starters, they are climatically better adapted to local ecological conditions and should, therefore, be more efficient. There's also less of a chance that epizootics - basically, epidemics - will develop. This is because a balanced relationship already exists between natural hosts and the indigenous control agent.

All the indigenous biocontrol agents I selected were highly pathogenic to both wasp species.

The only significant differences between them were in the rate at which the wasps died. But eventually all treatments resulted in very high larval mortality.

Now that the effectiveness of these pathogenic control agents has been proved, the next step will be to test them in the field in existing wasp communities. If they work there as well, it's an important stepping stone to eventually - hopefully - incorporating these biocontrol agents in a wasp management programme and taking the sting out of invasive species.