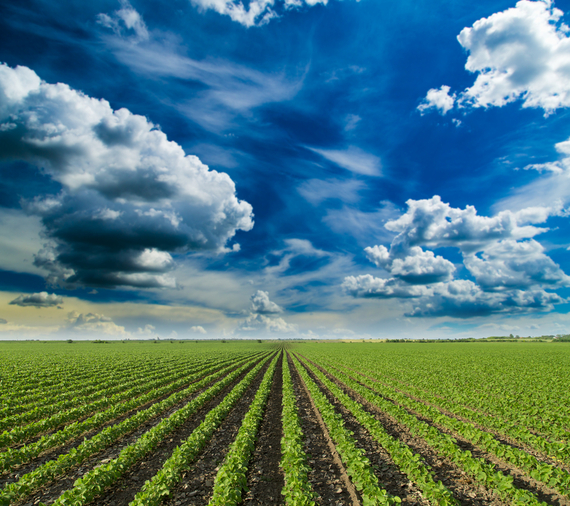 It's going to be a big global challenge to feed our growing population without destroying the environment.

The UN Food and Agriculture Organization estimates that worldwide food supply must increase by 70 percent by 2050. We don't just need calories; we need nutritious calories that reduce the risk of disease. Chronic conditions such as cardiovascular disease and diabetes impair quality of life and burden the global healthcare system.

This 70-percent goal must be achieved in the face of several long-term constraints. First, an already short supply of cultivatable land will become more limited as the population grows and climate change renders more land unfarmable over the next 35 years. That's the forecast of the Barilla Center for Food and Nutrition.

Second, demand for animal protein, which typically rises as countries develop, will further strain our primary food sources. The production of 1 kilogram of animal protein requires 10 kilograms of vegetable or microbial protein and 15,000 liters of water, according to The Atlas of Food: Who Eats What, Where and Why. This challenge faces us not just for farm animals. A 30-year flattened wild fish harvest is driving demand for farmed fish, according to the UN's Fisheries and Aquaculture Department.

Third, essential nutrients such as nitrogen, phosphorus, and non-brackish water will become scarcer and increasingly costly. This constraint will severely limit the world's ability to achieve higher crop yields through the chemically intensive agronomic practices that developed countries rely on to drive improvement. It is estimated that the combined effects of climate change, land degradation, cropland losses, water scarcity, and species infestations may cause yields 5- to 25-percent short of demand by 2050. The consequences of these macrotrends will be price volatility for food and 40-percent higher costs over the next decade.

Modern biotechnology can play an important role in meeting our future food demands in a sustainable manner. Biotech can increase crop yields, help develop new crops, and adapt existing crops to be cultivated on marginal lands with reduced fresh-water inputs. The technology not only may improve the nutritional quality of staple foods but can also diminish the need to cultivate crops on deforested land.

Rapid advances in biotechnology are reducing the time and cost to develop improved food and feed strains and engineer crops with improved drought and salinity tolerance and improved nutritional quality. New biotechnology tools enable scientists to introduce biochemical pathways to cells so we can breed plants that are safe and cost-effective sources of these nutrients.

At Genovia we are applying advanced biotechnology methods to develop the "algaebean," which will provide a renewable and sustainable supply of oil, flour, and protein for use as food and feed ingredients.

Microalgae are single-cell plants that can achieve significantly higher yields on marginal land with non-potable water and limited nutrient inputs relative to traditional row crops. Oil and protein yields of natural microalgae already are several-fold higher than what can be achieved with terrestrial crops and could theoretically go much higher with appropriate engineering, as shown in the graphic below. Economic modeling indicates that achievement of the "mature case" yields shown in the graphic can result in production costs comparable to projected costs of producing traditional crops. Furthermore, microalgae are inherently excellent sources of beneficial nutrients, including long-chain polyunsaturated omega-3 fatty acids, carotenoids, antioxidants, and certain vitamins, according to Mark Edwards, author of Freedom Foods. The update of algae as a crop of the future will accelerate with a reduction in the capital costs required to cultivate and harvest algae species and the development of more domesticated species of algae.

In parallel, there have been significant advances in methods to improve both the texture and taste of vegetarian-based protein sources, which can provide a more sustainable alternative to animal meat protein. For example, General Mills recently developed and submitted a patent application for a new extrusion method to texturize vegetarian proteins so that they have a "mouthfeel" more similar to animal meat protein. Impossible Foods has developed a method to extract the iron compound heme from plant tissues, which can then be added to vegetarian protein sources to better mimic the flavor and color of beef products.

Worldwide debate about the safety, environmental sustainability, and wisdom of genetically modified crops, which commenced in earnest with the commercialization of engineered crops in the 1990s, highlights the importance of educating consumers and improving transparency about how food products are produced and developed.

Acceptance of the use of biotechnology in the food and feed markets could be expanded by adhering to several principles. Industry must comply with product and environmental safety standards and support fair, accurate, and uniform labeling standards. Increased transparency is key to earning consumers' trust.

A good start would be to replace the term "genetically modified," which is ambiguous and can be applied to commodity food products produced using traditional breeding methods, with the more accurate "genetically engineered," to connote the use of the "hand of man" in product development.

Jim Flatt is the president of Genovia Bio, which is responsible for the development of algae-based solutions for food fuels and chemicals markets. Flatt will speak about the future of food at the March 25 Techonomy Bio conference.