The reason our brains have that wrinkly, walnut shape may be that the rapid growth of the brain's outer brain — the gray matter — is constrained by the white matter, a new study shows.

Researchers found that the particular pattern of the ridges and crevices of the brain's convoluted surface, which are called gyri and sulci, depends on two simple geometric parameters: the gray matter's growth rate and its thickness. The development of the brain's wrinkles can be mimicked in a lab using a double-layer gel, according to the study published today (Aug. 18) in the journal Proceedings of the National Academy of Sciences. 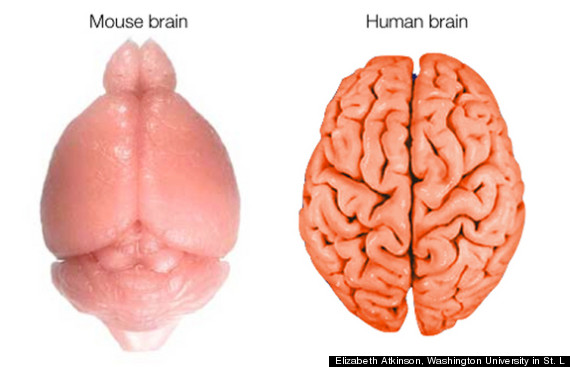 The human brain is relatively large and very wrinkled. Wrinkles increase the surface are for neurons.

The researchers noted that along with these physical constraints, genes also have a role in determining the brain's shape, because they regulate how neurons proliferate and migrate to their destinations. [10 Things You Didn't Know About the Brain]

All mammalian species have similar layering in the brain's outer layer — the cortex — but only larger mammals have a cortex that is folded. For example, a rat brain has a smooth surface, whereas a considerably larger brain such as a human's, has tens of gyri and sulci. A folded brain surface has a greater surface area — which means a greater power for processing information, but it's not entirely clear what factors determine the iconic shape of gyri and sulci in the human brain.

Knowing how the brain develops into its folded shape could help scientists better explain what happens in people with congenital conditions such as polymicrogyria (a condition characterized by an excessive number of folds), pachygyria (a condition with unusually thick folds) and lissencephalia (a smooth brain condition, without folds).

Historically, there have been three broad ideas about how gyri and sulci develop. One idea is that some areas of the cortex simply grow more and rise above other areas, creating the gyri. Another idea is that groups of highly interconnected neurons in the cortex are mechanically pulled close to each other by the threadlike axons that make up the white matter. However, evidence suggests that neither of these two ideas is correct.

The third idea is that the gray matter grows more than the white matter, leading to a "buckling" that gives the cortex its shape, the researchers said.

But earlier attempts to model this buckling were not successful, the researchers said. In previous studies, researchers assumed that the gray matter is a thin, stiff layer growing atop of a thick, soft base of white matter, but this assumption yielded wrinkles that aren't like the ones in real human brains.

In the new study, the researchers assumed that the gray and white matter have similar stiffness, but different growth rates. Using mathematical simulations, they showed that depending on the size of the brain, their model results in different shapes of brain surfaces. For example, for a small brain with a diameter of less than half an inch, the brain surface is predicted to be smooth. Intermediate-size brains are predicted to have some sulci that are found within the gray matter, and larger brains become highly folded, with sulci penetrating the white matter.

The scientists also replicated the brain's folding phenomenon using double-layer swelling gel material, and showed that only when the both layers have a similar softness level do the resulting folds look similar to the human brain's gyri and sulci.

The researchers noted that while their model works for fundamental gyri and sulci, it cannot explain more complex features of the brain — for example, the deep groove that separates the two hemispheres and other large sulci that define the brain's major lobes.