It's ironic how we all tend to dislike labels or being labeled as anything. I've always shied away from labels because I've felt that they limit one by capping off the entirety of who we are. I've heard people utter that phrase, "I hate labels" so many times that I've often wondered what it is that people like about them in the first place. I've also noticed that, depending upon the area of discussion, some descriptives can seemingly go on ad infinitum; and with every nuance, a tag is applied so that others can identify us and relate.

This holds especially true in the worlds of both sexuality and gender identification. Where once upon a time, our limited perception remained contained within an acceptable box of ignorant and close-minded thinking, now we are slowly but surely being introduced into the all-too-real knowledge that we are a multi-faceted species who can be defined in so many more ways than what the simple monikers of "gay" "straight" "bi" "man" or "woman" can cover.

After seeing Bruce Jenner's outstanding interview last night with Diane Sawyer, I felt so tightly locked on to some of the things he said that I couldn't shake the feeling of pure truth in his words. I related to that truth in my own life's experience. He really made a great point describing how sexuality and gender identification are two different things, which explained how one could be a "woman stuck in a man's body" while still being attracted to women. So, being transgender has nothing to do with who you want to have sex with. Who you find sexually attractive is an entirely different thing than what you experience when you accept or reject the body you were born with. Jenner is attracted to women -- and apparently has loved women all his life.

The courage of this person to come out like this is both brave and startling. While he is not the first, he is most certainly the first of this caliber -- being that he, in his most masculine incarnation won the Olympic Decathlon in 1976 and went down in history as the World's Greatest Athlete, not to mention one of the most sexually desirable men ever to grace our planet.

This is a person who now has a lot of eyes on him -- and he is making a difference. The effects of this interview will be longstanding. Jenner is doing what he does best: He's taking the lead and going for gold, with a massive trail of inspired followers behind him, all shivering with awe and relief over the fact that someone is "this" courageous and true to themselves.

And so, on the topic of labels, my feeling is that Jenner found his labels and they have both liberated him and allowed us to know how to think of his status. But what about us? Who are we? What are our labels? Some of us may relate full on to what Jenner is living through -- and then again, some of us may relate in "ways" but not identically. I relate... and Jenner's words sent me down the rabbit hole in search of the labels that would describe who I feel I am.

Last week, I did myself a disservice -- and I paid for it. I wrote an article for YourTango on asexuality, but I posed the article in an odd way. Instead of coming clean and admitting that I was the asexual "hero" of the article, I metaphorically split in two, so that I could basically interview myself by playing the part of the judgmental, sexually active antagonist.

At the time, I did it in order to show how asexuality is a real thing and I wanted to show an example of what intolerance and misunderstanding looked like. What I didn't realize is that I wrote it in fear. That is why I unconsciously wrote myself as the adversary -- because on some level, I feared being attacked for not being the cool, sexy sex freak that loves sex, sex and more cool sex. I feared having people tell me, "Oh you just need to get fucked," because isn't that what asexuals are always told? I don't mean that as a joke. I'm serious. People really think asexuality is a thing that can be "cured" with a good shagging.

The irony was, I did get attacked -- but not for being asexual. I was attacked for being so insensitive and judgmental toward asexuals. And all that time, I thought the "cooler" road to take would be the one where I pretend to be the sex beast that can't understand a life without sex. Ha! So, my admission here today isn't because I found out it's cooler to be asexual - it's because I found out it's infinitely cooler to live in the truth.

And after Jenner's interview, I wondered, what is my asexuality about? Because I'm not young, and I've certainly understood this aspect of myself for a very long time. I don't know if I can be labeled asexual as a constant; I was sexually active in my life -- yet, my sex life has always been off kilter. After watching Bruce Jenner tell it like is it, I realized who I am, who I've been, what my labels may be, and why my life has been so weird when it comes to sex.

I'm not like Bruce. I'm not transgender, but I am something that could use a label. I am sexually attracted to men -- always have been -- but not enough to crave actual sex with them, unless of course they are Mads Mikkelsen, who I would schtupp so hard that his eyeballs would explode.

So, sexually, I love men -- but do not want sex with them. I've been with women in bed as well, and it never really turned me on. Still, I tried. And what being in bed with women brought out in me was my serious male side -- and that, I adored. But here's the kicker -- and this is why I'm asexual -- I don't want to be touched by either sex, and that is because if I am touched, then I will be identified as a woman... and that is what I do not want, because being identified as a woman cancels out my desire to look like a man. And this not wanting to be touched, this is at the heart of why my sex life has always been so weird. I have never had a sexual partner understand me, and so, I have found asexuality to be a much more acceptable umbrella for me to fly under.

You see, for all the men and women who have said lines to me like, "I know how to make you a real woman" - they never understood that discovering the 'real woman' inside me was not my goal. What they wanted was humiliating to me. Now, had anyone ever said to me, "Keep that hot men's suit on while we have sex, you gorgeous stud," then I'd probably have a happy sex life. But everyone who ever wanted me, wanted a woman. And well, I only ever just wanted to be, well...Alain Delon. Heh.

I can fall in love with either sex -- that I've proven. The love of my life was a woman. So, if there's a label for me, it might be "bi-romantic asexual". But could I cap it at that?

So, even though I still don't know what to do with this unearthed information, I'm grateful to Bruce Jenner for opening up the conversation that allowed me to delve deeper into my own being. I know now "why" I've never had a really good sexual relationship. It's not because I'm a man inside; it's because I want to look like a man while remaining a woman, and no one in my entire life has ever accepted or welcomed this into their life -- except for possibly, my gay boyfriend, Douglas, who always loved me just the way I am.

Being exposed and owning it definitely makes one vulnerable. But it also comes with a superhero power: the ability to say "fuck you" to anyone who worms their way out of their hole to put you down for who you are and what you stand up for. 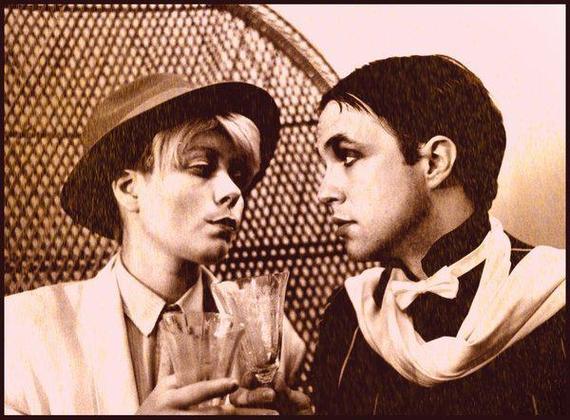 Dori Hartley and Douglas Rowan, having fun, being themselves.

Editors' note: Though Jenner has come out as "for all intents and purposes a woman," he has not yet indicated that he would like to be known by a new name or female pronouns, so this story uses male pronouns.