In San Francisco today, nearly 60 companies are announcing major plans to reduce their carbon emissions, increase the energy they get from renewable sources and bring their suppliers along with them. The companies -- ranging from Autodesk to Schneider Electric -- are making the pledges at the Clean Energy Ministerial, the next step in putting the international climate treaty reached in Paris in December into action.

These corporate investments and announcements won't just help address climate change, they will drive economic and job growth in communities all across America.

Honeywell, for instance, says it plans to spend nearly $900 million over the next four years on research and development to improve its insulation materials, controls and refrigerants. Ingersoll Rand plans to invest $500 million for R&D into energy-efficient HVAC systems. Autodesk, following other companies like Microsoft, is setting an internal price on carbon and also plans to power 100 percent of its offices by renewable energy.

Philips Lighting, meanwhile, announced a goal to sell 2 billion high-efficiency LED lightbulbs by 2020. If it reaches that goal, it would save an amount of energy equivalent to the generation capacity of 60 coal-fired power plants and reduce emissions by the equivalent of 24 million cars.

You can expect all of these corporate initiatives also will create lots of good-paying jobs. 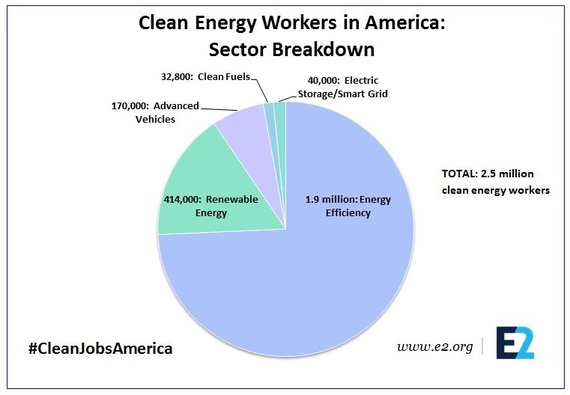 Like the energy leaders from 23 countries gathered in San Francisco this week for the Clean Energy Ministerial, local leaders know the economic value of clean energy too.

As part of the ministerial, Governors of California, Oregon, Washington -- along with their Canadian counterparts and the mayors of numerous Pacific Coast cities -- agreed to a sweeping new agreement to expand building efficiency, electric vehicles and renewable energy throughout region stretching from Southern California to British Columbia.

In doing so, they'll cut greenhouse gases by 80 percent by 2050 -- and they'll also attract new clean energy investments, businesses and jobs to their states.

"Clean energy is the biggest job creator in the country," said Washington Gov. Jay Inslee. In addition to signing the multi-state agreement, Inslee on Wednesday announced a new clean air rule that for the first time will put a cap on greenhouse gas emissions by big industrial companies in his state.

What events like the Paris climate conference and the Clean Energy Ministerial do is bring leaders together -- whether at the international level, the state level, or the business-to-business level.

And when leaders work together, it makes a difference.

"Our combined economies make up one-fifth of the world's economy," said Oregon Gov. Kate Brown. In recent months, Oregon has phased out coal, implemented a low-carbon fuels standard and set a goal of getting 50 percent of its energy from renewables.

"Oregon is a small state ... we can't change the nation's economy," Gov. Brown said. "But what we can do is provide a leadership role."

Of course no state leads on clean energy more than California.

For decades, California has been on the forefront of renewable energy, energy efficiency and clean fuels standards, including its latest plan to get 50 percent of its energy from clean, renewable sources.

As a result, California has created more than 500,000 new clean energy jobs. It has saved consumers and businesses billions of dollars on energy costs. And it has clean up its once notoriously filthy air by setting smart standards that cap emissions from factories, increase renewable energy and decrease emissions from power plants and automobiles.

"From where we started, we've come a long way," California Gov. Jerry Brown told attendees of the Clean Energy Ministerial.

We still have a long way to go. But at least we're now well on the way.