Computer simulations are big business, and getting bigger. Researchers use computers to model nearly everything, from the climate or the economy to traffic flows in cities. Increasingly, simulations are even used to investigate human culture and other societal processes, such as the ways that languages split off from one another. But people who model human societies often overlook religion. So how do you model religion using computers? As I explained in my first blog post, my postdoctoral project uses computer simulation techniques to better understand religion. Let me explain. 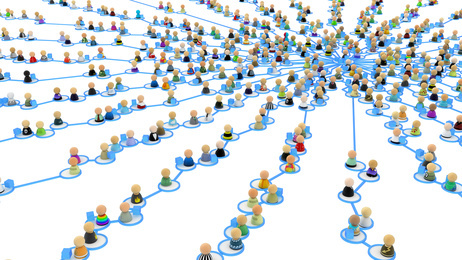 First, we're not dealing with what philosophers call "first-order" problems, like whether God exists or why bad things happen to good people. Instead, we're studying the cultural, cognitive and ritual processes that undergird religion and culture. However, we are asking some pretty foundational questions about humanity. For instance, why do humans participate in ritual? Why does every recorded society have supernatural beliefs? Why do some religions (like Islam) spread and attract converts for thousands of years, while others (like most new religious movements) die out?

Our team, funded by the John Templeton Foundation, is using two different types of computer models to investigate these issues: agent-based and systems dynamic models. Agent-based models use "agents," or simulated persons, which interact with each other according to set rules. The results of these interactions tell the modelers -- that is, the researchers -- important things about social and cognitive processes.

The most famous agent-based model is probably "Sugarscape," created by simulation experts Joshua Epstein and Robert Axtell. In the Sugarscape model, agents move around on a virtual landscape, interacting and gathering resources from their surroundings. The landscape is made up of cells, like squares on a checkerboard or a grid. At each timestep -- an arbitrary unit of time that can correspond with minutes, days, or even years -- agents move from one cell to another, scooping up resources. From just a few very basic rules dictating how agents could move and interact with one another, Epstein and Axtell found they could generate extremely complex social dynamics, from tribal warfare to international trade to gradated social hierarchies.

For studying religion, our Modeling Religion Project is using agent-based models similar to the Sugarscape program, but with rules for the agents' behavior taken from empirical and anthropological studies of religion. For instance, we know that religions often generate what cognitive anthropologist Scott Atran calls "sacred values" -- nonnegotiable commitments that can't be exchanged for any monetary value. Both Israeli Jews and Palestinians consider Jerusalem a sacred city. When peace negotiators offer monetary compensation in exchange for giving up claims to this sacred place, both sides often grow more committed instead. Sacred values don't abide by the normal rules of economics -- the adage "everyone has his price" literally doesn't apply. By programming such a rule into an agent-based simulation, we might learn more about how sacred values fuel both religious conflict and ethnic identity.

Systems dynamics models are different. Instead of simulating individual persons in landscapes, systems dynamics models represent abstract flows and feedback loops. This probably explains precisely nothing, so let me give an example to make things clearer. Systems dynamic models were originally developed to help managers and directors understand the flow of materials, supply, and demand in organizations. If you're the director of XYZ Thingamabob Corporation, you need to know how the yearly cycle in demand for thingamabobs affects hiring. Your team designs a systems dynamic simulation that shows how fluctuations in demand affect production hiring and layoffs. Using that model, you retool your hiring strategy to cut down on layoffs (and training expenses). As a result, profits increase. You get a big bonus from the Board of Directors. You retire to Aruba. See why modeling is important?

Systems dynamics models operate in terms of "stocks" and "flows." In the above example, the "stock" is the number of workers and the "flow" is the change in this number, either through hiring or layoffs. In a model of the economy, the stock might be capital and the flow might be investment and depreciation. So how could this apply to religion? Well, the diagram below is a beta version of a model I'm working on with team leader Saikou Diallo, which simulates the growth or shrinkage of religious groups. Using what's called "club-goods" theory, we predict that religions that impose higher costs on members will retain more members. In turn, these costs will affect people's level of personal satisfaction and well-being -- too many demands, and people will get turned off and leave the group. But too few demands, and people won't be satisfied either. 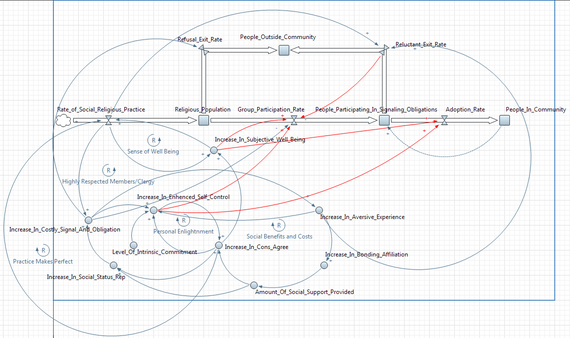 In Saikou's words, this model "describes the relationship between religious practice as observed through ritual participation and the size of a religious community. Our goal is to capture the main influencers and sources of change that might affect the flow of people into and out of religious groups."

So there you have it -- two major types of models, and a couple of examples of how we'll be using them to test and refine hypotheses about religion. By exploring detailed hypotheses using social and cognitive computer simulations, we'll make headway on crucial scientific questions about human culture and cognition. That description sounds a bit bloodless, so let me put it more colorfully (and, I think, accurately). We're not just studying "cognition" or "behavior." We're studying some of the central questions about people's fundamental motivations and cultural commitments. We won't answer big questions about God, but we can produce insight into how religious beliefs motivate us and influence our relationships and societies. In an age of ISIS, New Atheism and big demographic shifts, that kind of knowledge is priceless.