A Buddhist-Christian conference was held at the Union Theological Seminary in Manhattan, New York with a Q&A session. The lectures and subsequent discussions lasted from 7 a.m. to 9 p.m. for four days, and more than 300 people attended.

The conference created a space for Americans to share concerns about their country, which carries the power to move the world and maintain its position through its superior military and economic status. I participated as a representative of engaged Buddhism, and had conversations with many Americans. 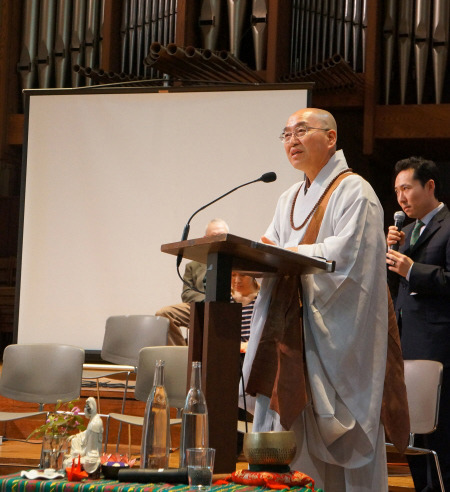 A young man who was just over 20-years old asked how to strengthen God's will in his heart because his religious convictions have become weaker than they were when he was a child; an African American activist sought advice on how to use meditation to get others involved in abolishing discrimination against ethnic or sexual minorities; and a gray-haired gentleman asked the following question:

"My name is Michael. This is not a personal question... How can we save the United States and heal the world?"

(The audience laughed because of the excessively broad question.)

The United States has great power. What is important is how that power is exercised. If the strength is used to help others, the results will be positive; if it is used to harm others, it will of course be negative. I was in the village of the Scheduled Caste in India when 9/11 happened. At that time, the whole world was thrown into utter confusion, yet the village was quiet because there was no TV or radio. I asked myself, "what does it mean to live well?" They didn't have enough food or clothes, and many of them were sick -- but there was no anxiety or panic that Americans felt at that time.

Visiting the U.S. for the past 30 years, I feel that Americans are more and more afraid. Airport security has been beefed up, and getting into the U.S. is harder than any other country. Access to government offices is also very complicated. "Is living like this really living well?" I asked myself. I think one would live more peacefully if one were to save a fraction of the money spent on security for people in despondency.

"Your pain might be immense. It will give rise to a great anger. If you act on emotions, you will seek to catch and attack the criminal in revenge. I would do so, too. But let's think again. If the US is indeed a Christian country that understands those who are responsible and their frustration and their despair, and thus restrains its emotions to show them mercy, just as Jesus Christ prayed for his crucifiers asking, 'God, please forgive them,' then the U.S. will maintain its wealth and power for a long time. If you act in revenge, however, one might suppose one hundred years from now that the empire started falling the same day that the World Trade Center collapsed."

The U.S. didn't make the right choice. I understand. It may happen to all of us. But if you were to arrive at a different decision... how do you think things would have turned out in 10 years? You might have punished them by attacking Afghanistan and Iraq, but how much money did you spend? How much more nervous and terrified are you now?

The holy saying "Do not revenge wrong with wrong" is not for the enemy but for ourselves. I think the U.S. still has a chance. Whether to take advantage of that opportunity and prosper or to collapse like many other empires in history depends on our choice today. We must go beyond our emotions to seek safety and prosperity. Having a gathering like this today also shows a possibility for improvement. I wish we nurture this hope together.

Listening to my answer, the gentleman who originally asked the question said "I deeply thank you" in a cracked tone. Other Americans there responded "yes" as well, nodding and giving a big applause. 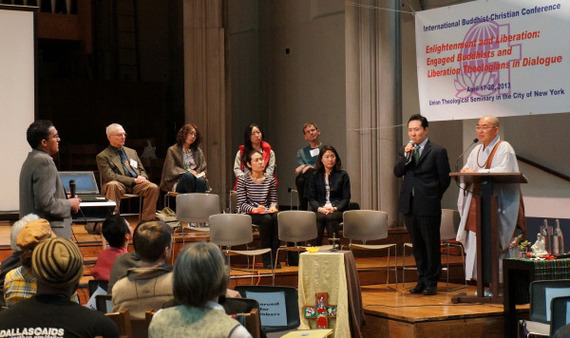 Another person asked: "How should we maintain peace despite the anxiety induced by the threat of North Korea's nuclear weapons?"

In addition to avoiding war and maintaining life and property, peace should also include living like a decent human being. Towards the end of 1990s, over three million people died of famine in North Korea, which is more than the number of people who died during the Korean War. We might have peace, but North Koreans are going through a more excruciating pain than war. A more active way to nurture hope is to study the international network of relations that affects the severity of famine.

Hope always exists, not only in times of happiness but also in times of despair. Our thoughtful choice today will open the door to hope.

This blogpost was translated from Korean and was originally published on HuffPost Korea.