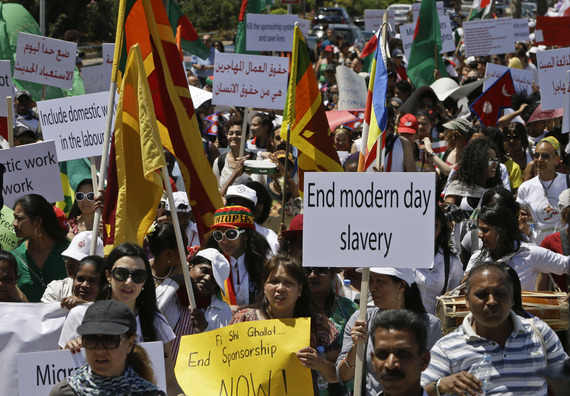 On 2 December, the world marks the International Day for the Abolition of Slavery. That might suggest that slavery is a thing of the past - but tragically, it is not.

Slavery still thrives around the world. Although enslavement is recognized as a crime against humanity, recent estimates put the number of slaves alive today at between 20.9 and 35.8 million.

Where are they? In two new reports we are publishing to mark the International Day for the Abolition of Slavery, our organizations argue that slavery is embedded throughout the global economy.

Wherever you are, there are slaves - because despite the global prohibition on slavery there are slaves in every country. The UN reports that ISIS has organized slave markets and publishes 'how-to' manuals. But even the UK government, for example, recently estimated it is home to between 10,000 and 13,000 slaves.

Modern slaves can be found not only in ISIS-run slave markets in Syria, but also in the Congolese mines that supply minerals to make the world's smartphones, in South Asian brick kilns, in Thai fishing fleets that supply our supermarkets, and in the Brazilian charcoal industry. Slavery can be found in global garment supply chains, American agriculture, and on the construction sites for tomorrow's mega-sporting events.

No state can effectively tackle modern slavery on its own. As Pope Francis recently noted, slavery is a "global phenomenon which exceeds the competence of any one community or country."

Fortunately, the world is waking up to this, and also realizing that slavery is not as profitable as it might at first seem.

The International Labour Organization estimates the profits from slavery at $150 billion annually. But as our reports show, there is increasing evidence to show that even as some exploiters profit, slavery shackles development - imposing significant costs on communities and states. It drives down local wages and productivity, suppresses tax revenues, and removes valuable human capital from the economy.

We all bear the costs of slavery.

This also means, however, that fighting slavery is smart development policy. World leaders recognized this when they adopted a new target in Sustainable Development Goal 8.7 at the UN in September - to end modern slavery by 2030.

How is that going to happen? The good news is that we already know quite a bit about which keys unlock the shackles that slavery places on development.

The challenge now is to produce enough keys for every shackle. New sources of funding for anti-slavery efforts, especially from the private sector, can help. But research makes clear that private action and public regulation have the biggest impact in this field when they work together.

The United Nations has provided leadership in combating slavery, forced labour and human trafficking over the last century. International criminal tribunals are also helping explain how the norms against slavery apply in contemporary conditions. Our analysis reveals however that these international efforts are fragmented and poorly co-ordinated, weakening their effectiveness.

Today the UN system provides limited political leadership to sustain anti-slavery efforts in the face of vested and corrupt interests. Most interventions act at a local level, failing to address global supply-chain issues. And interventions are haphazardly funded and often not driven by global data sharing and analysis.

International anti-slavery efforts do not effectively bring together the different levers of development policy, trade regulation, on peace and security and in international criminal justice, and through engagement with business.

How do we get there?

Our reports argue that a a Global Partnership to End Modern Slavery could help coordinate efforts to protect global supply chains against slavery by creating roadmaps to help states and global brands and retailers undertake reforms.

It could lower the transaction costs for communities, countries and companies looking for anti-slavery assistance. And it could foster innovation through pooled investment in data, research, development, and dissemination.

Building such a partnership requires leadership - especially from governments, the UN and regional organizations. We need to make slavery a focus of integrated multilateral efforts, if we are going to end it by 2030.

The UN Secretary-General should appoint a time-bound Special Envoy on Modern Slavery, to work across the different silos within the UN, and with Member States, to build this Global Partnership over the next two years.

States should make ending modern slavery a focus at the UN, taking action within the UN General Assembly and Economic and Social Council. The UN Security Council could help fight the erosion of the global norm against slavery by ISIS and Boko Haram.

And the ICC could also do more, using targeted prosecutions to reinforce respect for the norm against slavery, providing assistance to victims, and working more closely with UN human rights actors.

Ultimately, as Nelson Mandela recognised, "slavery is not natural. It is man-made and it can be overcome and eradicated by the actions of human beings."

Only if we work together, can we hope to end modern slavery by 2030.