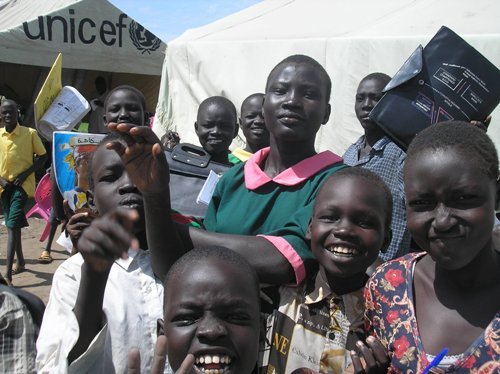 An excerpt of this interview was recently published in the New York Times.

Fact: Sudan has diverted the world's attention away from the atrocities its government is committing by arming the rebellion in South Sudan. Current sanctions do not support peace.

The U.S. government has maintained an embargo on Sudan for decades, but recently it was reported that a policy change will facilitate access of American technology products, such as smartphones and anti-virus software. Will this policy shift help support peace in South Sudan? I (JT) wanted to know how the global community can best help South Sudan, so I interviewed Nanthaniel Chol Nyok (NN), one of the Lost Boys of Sudan, who recently returned from the refugee camps where he visited his family. He aspires to building a new High School in South Sudan to transform the region through education.

JT: You recently returned from the South Sudan. How do villages receive news about developments in the conflict and with peace negotiations? Less than 10% of South Sudanese are literate, so written reports are not effective. Are some news delivered in local languages?

NN: Villages do not get any news. Most people do not read, write, or speak English or Arabic. They do not get any information about negotiations or new developments in relation to the conflict via these media. There are no credible news sources in local languages. Sometimes, messages are sent to people through local radio channels, but there are not a lot of these media either. When the war started, rebels used these channels for hate speech that led to the killing of many people especially in Bentiu and Malakal, so most of these local radios were closed. Now, civilians in the displaced camps and villages are denied their right to information. The Western news media will never be very accurate as long as most areas are inaccessible especially the one in the rebel-held areas. Also, there is no free information sharing in South Sudan. Most media people report whatever they could find, sometimes old or biased information.

JT: Is it possible for social movements to make a difference in this conflict, such as the Arab Spring? Use of social media?

NN: For social movements to make a difference, people must be educated. Social movements cannot bring a change in South Sudan now. Most people do not understand their rights. Most people who report on social media are biased. They do not report on issues - they report on identification and affiliations. The marginalized African population that is fighting the government in Darfur, Blue Nile, and Nuba Mountains is never educated, which is the reason they are fighting their government for being responsible for their backwardness. If a few literate activists get this technology, the rest don't need it. Hence, there won't be any major difference. The government could also use the same technology to track down the dissidents and activists. Sudan has diverted the world's attention away from the atrocities its government is committing by arming the rebellion in South Sudan. Now, the world thinks what is happening in South Sudan is separate, but the Sudan's Peninsula is embroiled in a political mess. Sudan created this opportunity in order to finish off the resistance in Darfur, Blue Nile, and Nuba Mountains, while destabilizing South Sudan.

JT: As a Sudanese and as a "lost boy of Sudan," why is it important for you to achieve your dream of building a new High School in South Sudan?

NN: Education prepares people to make decisions they could not make otherwise. We had all the civil wars in Sudan because the South Sudanese were denied education, so they couldn't be represented, couldn't take control of their own resources, couldn't fight for their rights, and the North Sudanese couldn't treat them like humans. In this South Sudan's conflict, lack of education causes people to believe that tribal identity weighs more than national identity. Most people still hold on to ancient myths about each other. To break these barriers and misunderstanding, the South Sudanese need education. Economically, people depend on the government to provide everything. People lack skills to find jobs or create one to care for their families. This leads tribes to compete over the government jobs. When one tribe has more people in the government than the others, this triggers accusations that spark violence. In addition, tribes raid each other for economic resources. In the process they kill each other over cattle and children.

NN: On the political level, our leaders are not well educated. They lack public administration skills. As a result, there is pervasive corruption and malpractices at all levels of government. On the social level, girls are married off at young age because they have no school to attend, they have nothing to do with their families, and they are a source of income as they are married with dowries. People also face health challenges and poverty due to lack of health professionals and a source of income. Once the girls are married, they fall into problems. They are not ready to bear children. They cannot care for their children. Their children face health issues since their mothers cannot figure out what's wrong. Building a high school for me is very important. High school education in South Sudan is huge. Girls and boys with high school certificates can find jobs and earn income to sustain their families. A high school will give parents a reason to not marry off their daughters as their daughters go to school. Girls after completing high school will be matured physically and mentally. They can know what to do with their health and bodies. They can be ready to have children. They can know what to do with children when they are sick. They can also be willing to send their children to school. Overall, the high school will bring students from different tribes together. Here they can learn a new identity -- national identity. They will pay loyalty to their nation, not to tribes. They would also be engaged in school, and as result would not train as raiders of other communities. They would also adapt a sense of unity as they learn, interact, and work as children from diverse communities. Most importantly, a high school education would also open a gate for those with opportunity to continue to college and university. This can shape the future of South Sudan.

JT: What do you believe is the most effective way for the U.S. and the global community to help?

NN: More pressure or even threat could be put on the rebels to give up the rebellion and negotiate issues with the government. The government has given amnesty to many other rebels before. There is no reason the government cannot do the same with these rebels. No doubt, South Sudan needs reform, but conflict can never bring that reform. However, we must make sure that the two sides guarantee to reform the system in all the levels of government. The rebellion consists of only less than ¼ of the Nuer population. The majority of Nuer stands with the government. It is only this portion of Nuer which are fighting the other 64 tribes. Do we want to stand with the majority to save South Sudan, or with the less than ¼ of a single tribe against the government? It is absolutely the choice of the US and UN, and the global community, but I think it is important for us to set a precedent so that future conflict is avoided. If this rebellion is given much recognition, other greedy politicians will take the initiative and form their own rebellion to ascend to power. In this illiterate society, it is important for the world to send a message that there is no reward for conflict.

JT: I want to help in any way I can. I hope some of our readers will join us. Thank you very much.