Afraid of the savagery from terrorists who kill cartoonists, decapitate journalists, or gun down children in the name of a prophet who is likely turning in his grave. Afraid of the confirmation, once again, that jihad has caught on in the Parisian banlieues, and furthermore, in any neighborhood within any city, no matter how great it is. It's become a perverse claim to glory for those who think they have nothing to lose.

How can we not be afraid of the inability of any government, Eastern or Western, secular or religious, working alone or in a coalition, of offering reasonable protection for its citizens against attacks meant to inflict maximum harm: The Twin Towers in New York, the Atocha trains in Madrid, the London metro, a schoolhouse in Peshawar, the newsroom at a Paris newspaper, or a kosher supermarket?

How can we not be afraid of the upcoming assault on civil rights: illegal wiretapping, less due process, more control, more border security, more covert operations, more official opaqueness, more drones... "Choose between safety and freedom," they'll tell us, while resources meant for defense and intelligence will increase, and those meant for cooperation, education and social integration -- those powerful tools of civilization -- will decrease.

Afraid of the defensive reaction, as much human as it is visceral and dangerous, of citizens who have watched others stirring fear over a long period of time and now don't have to say, "I told you so" for their populism/racism/Islamophobia/Anti-Europeanism/Anti-Semitism can take hold. I think of Le Pen, of Pegida... and so many other charlatans with their volumes of quick fixes for complex problems.

Afraid of the hostility, overt or subtle, that many Muslims will face tomorrow in their neighborhoods, offices, schools and universities. In Spain, they make up 3 percent of the population, and in the Netherlands, the European nation with the highest Muslim population, they are 6 percent. Read this post from Leila Alaouf, a Franco-Syrian student who covers her head with a scarf, for a firsthand account of what it feels like.

It's understandable to be worried and afraid as we let the pain sink in from the Charlie Hebdo killings and the frantic hours that followed, and that likely will continue. But fear is also a necessary defense mechanism to place all our senses on high alert, including the most valuable of them all: our intelligence. This is what dictates to us that in order to fight against fanaticism, there is no other way but to strengthen the principles of liberty, equality, tolerance and respect for the law that are the common ground upon which we are building Europe: a task that continues to require the best of us. 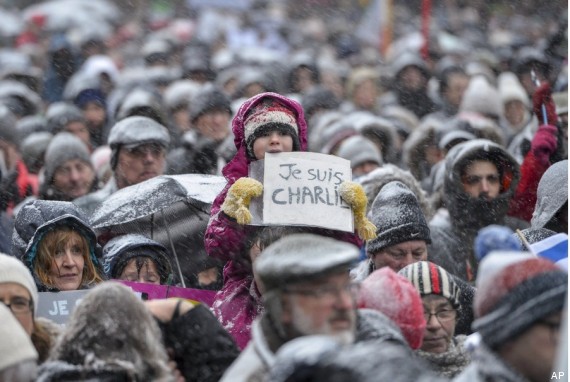 That's the message that I have read today on the faces of millions of citizens who have come out to the streets of Paris and so many other cities. I'm also scared, worried... and determined to do battle -- with a pencil or keyboard -- so that fear doesn't change us.

Postscript I: Truth and Fiction

The night of Friday, January 9th, after three days of intense coverage of the Paris attacks (and once it was confirmed that the umpteenth death of Fidel Castro on Twitter was a hoax), I tuned out off the 24-hour news channels and looked for something to help me unwind. These were my choices, available at the same time on different channels in the wee hours of the morning: A Good Day to Die Hard, Stealth, Heat, Shooter, When We Were Soldiers, and Walking Tall.

I thought about the execution of police officer Ahmed Merabet during the escape of the Charlie Hebdo terrorists: so brutal and unprecedented that it sticks in your visual memory like a nightmare. There's been a polemical debate about whether the media should publish that video. In France, as a sign of respect to Merabet, they haven't done so. In Spain, we have done so, for the same reasons that were laid out in El Pais by ombudsman Lola Galán: primarily, its informational value.

I can't help but wonder: How many films such as these have the Kouachi brothers watched throughout their lives? How many video games permeated by violence, like the ones we gave our children this Christmas?

On Friday in Jeddah, Saudi blogger Raif Badawi received 50 lashes-- the first of a thousand to which he was sentenced for "insulting Islam," a punishment that goes along with the ten-year prison sentence he is now serving. His crime, as told by the head of Reporters Without Borders Lucile Morillon, was starting a public debate about the evolution of Saudi society. In November, he received the Freedom of the Press award that the organization bestows for promoting freedom of information. Other organizations, such as Amnesty International, have also mobilized to ask for his freedom.

This post originally appeared on HuffPost Spain and was translated into English.