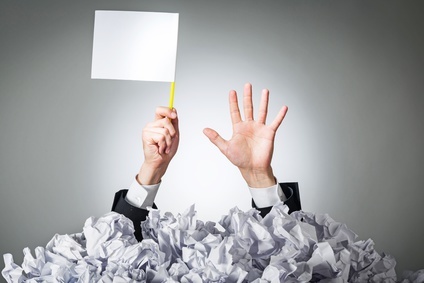 "Happily, there is another way to relate to life -- a softer, more graceful path that makes life seem easier and the people in it more compatible. The 'other way' of living involves replacing old habits of 'reaction' with new habits of perspective. These new habits enable us to have richer, more satisfying lives." -- Richard Carlson, from "Don't Sweat the Small Stuff"

When I first met Linda Chester, my literary agent, one of the first things she asked me was had I read the book, "Don't Sweat the Small Stuff." She told me that the way the mindset of "Maybe" helps people in today's uncertain economic climate reminded her of the timeliness of "Don't Sweat the Small Stuff", which was published in 1997. I had never read the book so I bought a copy. Besides finding it to be an insightful book with great advice, I was particularly amused by the story told by the author, Richard Carlson, in the introduction of the book.

Carlson had been instructed by a foreign publisher to get an endorsement from Dr. Wayne Dyer, a self-help guru, for a foreign edition of another book Carlson had written. Although Dr. Dyer had endorsed a previous book of his, Carlson had no idea if Dr. Dyer would do it again but told the publisher he would try. He didn't receive a response from Dr. Dyer and told the publisher he couldn't get the endorsement. Some months later, Carlson received a copy of that foreign edition of his book and saw an unapproved endorsement from Wayne Dyer on the cover. Carlson was extremely upset and stressed and began trying to get the books taken off the shelves until the matter was corrected. He also wrote Dr. Dyer immediately to apologize for the mistake and to tell him he was rectifying it. A few weeks later he received a note from Dr. Dyer and it said, "Richard, There are two rules for living in harmony. 1) Don't sweat the small stuff and 2) It's all small stuff. Let the quote stand. Love, Wayne." Carlson was amazed with Dyer's grace and humility regarding the matter. So much so that he wrote an entire book with this concept in mind.

I find the idea behind Carlson's book -- that we should all keep things in perspective -- very helpful. These days, I often spend some time thinking about the things that are really important to me. If whatever I am facing does not land in that important category, I find greater ease through perspective and I'm able to let go of my stress and worry. I then do the best I can, knowing it will work out one way or another. This works wonders for bothersome events such as water leaks in the house, petty disagreements with my spouse, and my kids misbehaving at the dinner table.

However, in the past, I found it much more challenging to find perspective when I was facing something that was extremely meaningful to me such as missing out on a job opportunity, a big disagreement with a friend or a health concern. My fear of how things would work out and what it would mean for my life made it hard to gain that perspective with ease and grace. In those moments, the fear of my life not working out and bad things happening was overwhelming.

It was only when I discovered the mindset of MAYBE that I was able to gain the perspective that allowed me to relax into the moment and let go of my fear and worry. With the help of Maybe, I realized that life always changes and the problems I face today will most likely change tomorrow. If a situation looks bad or something unexpected happens, instead of starting to worry and planning for the worst, I now pause for a moment and enter the realm of Maybe. Maybe is an open doorway through which to see that each situation may still have a positive outcome or Maybe there is another way to achieve my goal or Maybe I will find peace with whatever I am experiencing. This way, instead of shutting down with fear and worry, I am able to relax my mind and open up to all that is possible. I enter the moment with more ease and grace and the realization that no matter what I am facing, my life is still filled with hopes and possibilities.

You might like to use the Maybe mindset to combat your fears and worries about a situation. Consider the following Maybe statements: Maybe my beliefs about my situation are not true; Maybe what is happening is good; Maybe what is happening can get better; Maybe I can find a way to accept whatever I am experiencing and still be all right; Maybe, in time, I will know what to do next; Maybe everything is okay.

You can put these statements in your own words or just use the ones that feel right. Keep your attention on these Maybe statements the next few days and see what happens to your fears and worries. As you start to feel a shift, add the following mantra as you finish reciting your Maybe statements, "I am available and willing to see the situation differently."

Most often you begin to see that each situation you face has many possible outcomes and some of them might be better than you imagined. Maybe you will feel less stressed and worried about the SMALL stuff and the BIG stuff and more hopeful about what life has to offer!

Author of the Gift of Maybe, Blogger, Business Consultant and Life Coach